I always thought circles were round until now…

So I made a few toy cars and custom wheels and haven’t had a problem with Sally (my x-carve) until now. All the sudden she wont cut circles, instead she is giving me ovals. I checked my dimensions on vcarve and they are in fact circles at 1.3". However, the wheels are coming out ovals at 1.34 and 1.29. That’s not a big difference and most likely won’t ever notice, but I do… It also creates a slight wobble. So I’m left trying to do a four wheel alignment and balancing on a toy car OR try and make nice with Sally.

So my first thought was that the motors were out of balance, but the long side of the oval is getting cut on diagonal to my work piece and table. I would have thought that if the motors were causing this it would have been perpendicular to the material.

Belts are tight as well. Any thoughts on this would be appreciated. 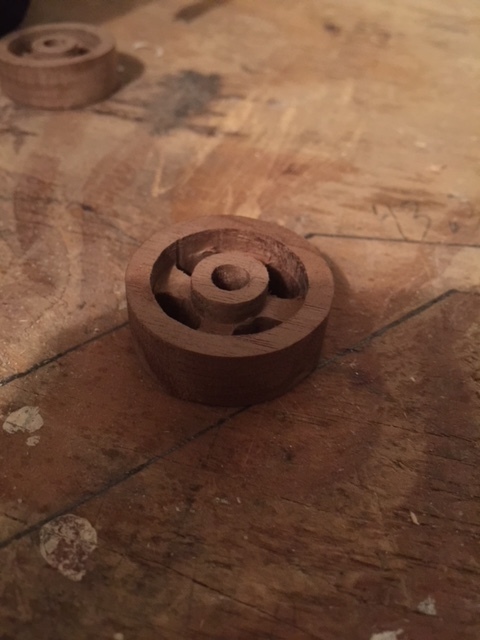 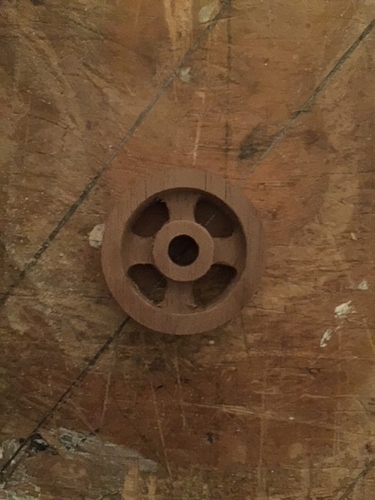 My guess is something might be loose on the machine. I’d check the pulleys, eccentric spacers, and belt clips.

What bit, material, depth per pass, speed on the router and feed rate did you use?

I checked my dimensions on vcarve and they are in fact circles at 1.3". However, the wheels are coming out ovals at 1.34 and 1.29.

Most likely machine deflection due to the sideway forces applied to the bit during carving. Any deviation is also typically seen during the transition from X to Y and vice versa. If one axis is more rigid than the other the bit will “drag behind” the path at around position 2/5/7/10 o’clock. The smaller the piece the more pronounced will it be.

The difference in size he is quoting is .050”. The machine is capable of keeping a .003” tolerance… I assume in this case there is a factor causing the issue that can be adjusted to fix the issue.

Is it camera perspective or are the vertical spokes of the wheel not aligned?

I’ll recheck all the belts and spacers and pulley’s again later today and reply back with what I find.

The router at 27k rpm is too fast. At that speed you are probably getting rubbing. The bit spins around so quickly that it hits the same area on the wood more than once. I’d slow it down to 16k or the #1 setting on the DEWALT 611.

What is the depth per pass and what kind of bit are you using? How many flutes? What diameter?

They are not aligned. I drafted these wheels a while ago before I had a better understanding of vcarve. Since I’m not selling the cars, I didn’t bother to go back fix the spoke. So it’s now it’s an added feature, makes it modern looking. :)

That DOC is aggressive for 1/8 bit. Deflection maybe your issue.

Thanks, I thought as much while it was cutting. I m using a 1/8", 2f, end mill. So I had the vcarve setting to 14k rpm, but never bothered to make sure that translated to the dewalt until you just asked about it. (doh!)

I cut 16 of them all with the same issue. Would the deflection be consistent on all of them?

The formula to calculate the feed rate is FR = Spindle Speed x chip thickness x flutes. The depth per pass is a variable that can be adjusted based on the type of material. For a very soft material like pink insulation foam you can probably make the depth of cut the entire thickness of the material. For a harder material like Walnut it would be much shallower.

Yes as a rule of thumb you don’t want to go more than 1/2 the diameter of the bit in depth per pass. However Walnut is on the harder side so I would test out 64-96 inches per minute with a .020" depth per pass and adjust from there. It’s about finding the right material removal rate. If you go too slow you rub the material, if you go too deep you put too much stress on the bit, and if you go to fast you scrape the material rather than carve it.

Thanks for the tip! I rechecked everything, tightened the belts a bit and adjusted the speed and feeds to what you recommended. The wheel came out much cleaner with less finishing needed. However, it is still out of round, but I did close the gap to 1.28 and 1.31. Then, I thoroughly checked the z axis and it looks like a few things are not as square as they should be, and I suspect it is probably cutting on a slight angle. Overall, it looks I need to do a spring overhaul and calibrate everything.

Thanks to everyone that helped me work this out, especially Zach. I’ll repost after I calibrate.