Question about red/orange sections in Easel

I’m trying to touch up one of my projects in Easel so I can share it, and I’m confused about some of the red/orange sections that are appearing. I drew up my project in another program, and imported the SVG file into Easel. Here’s a link to the project:

and a picture of the preview: 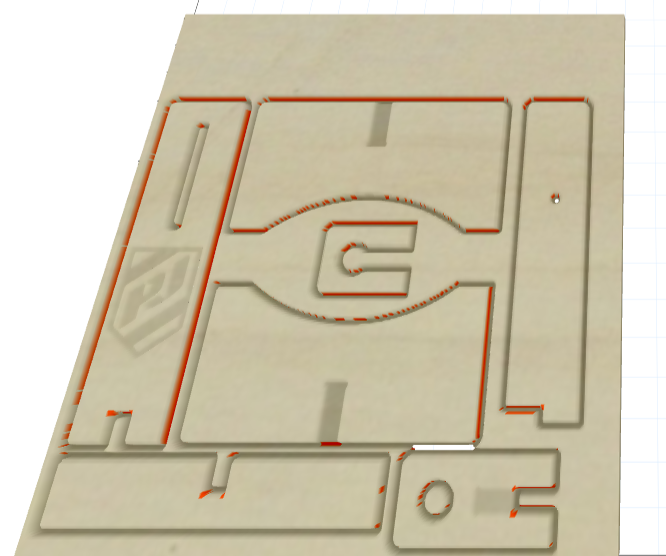 From what I remember of the Easel tutorial, the flagged sections are where the bit can’t cut, right? I can understand needing to open up some of my dogbones, as I typically make those just .01" bigger than the bit, and that’s probably close enough to get flagged. However, I can’t understand why it’s flagging some of the straight cuts, since there should be plenty of space there.

Any idea why so many of those sections are getting flagged?

When I posted something similar, it appeared to be a rendering thing between my PC and Chrome…other users didn’t get any red marks when they opened my project.

If you generate the toolpaths in Easel, do all the objects get a cut?

@PeterJames typically the red areas mean the diameter of the bit is too wide for the area being carved. In this case I can’t explain why those areas are red but I’ll ask our software team. In the corners it may not be able to make the “turn” as sharply as defined. Along the straight away it doesn’t make sense to me.

I also see this in places that don’t make sense.

I confirmed with our engineering team. The straight lines are a bug but the corners mean the bit cant make the sharp corner.

We are looking into fixing the bug.

Normally red means the bit can’t do it.

I’m having this same issue. Will it attempt to cut that section that it should be able to cut even though it’s red or will it just skip it?

I just saw another post about this that said to try it in Firefox instead of Chrome and I’m still getting unnecessary red areas saying it won’t cut even though they are spaced fine for the bit.

I am having the same issue. I made signs with text. I used homestead and the letters were 1" tall. half the letters showed fine and the last have had red marks all over them. Cut them anyway and they turned out great. What is doing this? Is it my computer or easel?