this software has directly integrated a CAM function to generate the GCodes from raster
images (JPG / PNG / BMP). the software looks very goods. 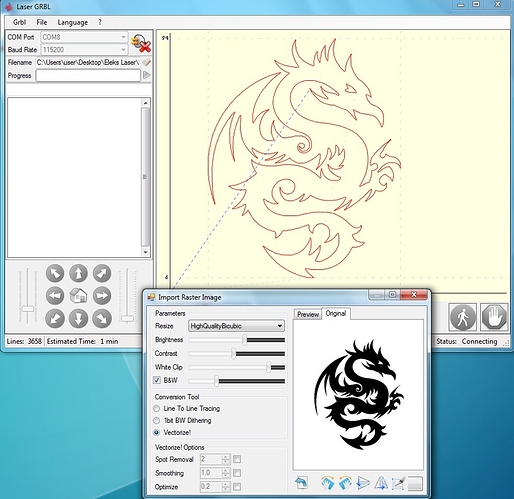 The web site talks about the ability to change grbl settings, but I didn’t see the interface for that. Just don’t change any grbl parameters with LaserGrbl and I think you will be ok.

With just my brief look, it doesn’t appear that you can select inch or mm and the G-code generated does not include a G20/G21.

If you want to try it, set up for laser mode in PicSender, close that out and then try LaserGrbl.

I did a quick run on a photo, produced the G-code to a file, looked at it, sent the file to my test machine (just an Arduino) and it seemed to go Ok with 1.0c

Most likely they didn’t know there was a version of 1.0c that supported lasers.

Is there a version of this for cam machines? I’m running a Shapeko 2 and looking for something that will export g-code from an image.