Request for help from a newbie. So I’ve been making these alphabet boards for a customer. He provided the wood and I didn’t notice that one of them was warped. This meant some of the letters weren’t carved deep enough and one (the ‘r’ - see pic) didn’t complete. I only noticed after taking the piece off the board. Due to the boards not being provided at the finished size I didn’t zero this side with the corner of the board so don’t really know where to zero from. Just checking there isn’t an obvious solution to enable me to re-carve the ‘r’ and if possible the other letters too… 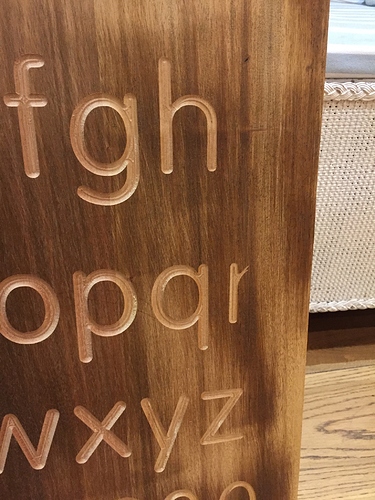 I’ve found at times with small things like this I just clamp it down, load any easel file and then after you click ‘Carve’ I just manually move the spindle while running in .01 or .1 inch increments using the associated X, Y, Z buttons. Basically you turn it into a manual moving end mill and just eye sight it. Harder with curves to get a clean slope but it guarantees I’ve got full control over the cut and I’m not going to be the victim of some G-Code line that I didn’t know was going to be there.

Hi Dave Didn’t you home the machine, and set an X,Y zero point before startling the carve, because you could have easily redone the carve using the set X, Y zero point. You just set the letters you don’t want to recarve to zero depth and change the depth of the “R” to whatever need to, and hit carve. Easy !

Yes I did but didn’t notice the mistake until sanding it hours later.

Thanks for this. Will give it a try …

It won’t help in this particular case, but in the event of a simple letter carving like this one:

For uneven material setting Z zero to an arbitrary point in the X/Y plane can give you problems, like you have experienced. Homing establish a known X/Y point in space, Z can be zero/re-zeroed at will.
With the waste board as reference you have a consistent Z reference.

if you know the approximate spot your bit was you can guestimate just don’t drop the z all the way to the board level. hit carve and let it carve in the air you can then watch it/ pause it and see which direction you need to make small adjustments in. repeat this until you are dead on then bring Z all the way down and carve for real

This is where a zero touch plate comes in handy - one like Charlie’s, you use it to find your x,y,z zero and then carve. If anytime later you discover something wrong with the carve, throw it back on the bed, zero with the plate and cut the part you need to over again. Charlie’s block or one like it will create repeatable cuts without problems.

Yes I think this is worth a go actually before trying the freehand. Cheers …

Maybe I’m not understanding correctly, but won’t this still give you problems if the material is not completely flat? If you are referencing off the waste board, which we assume is completely flat, a warped piece of material will still be carved inconsistently, won’t it ?

a warped piece of material will still be carved inconsistently, won’t it ?

That will only have an effect if one where to do a v-carve design or something similar in 3D. The design in the first post is not and the design would not be influenced. Wether the pocket of the carve is 2mm +/- 0,5mm due to uneven surface the design would still be intact and “complete”. Zero of the waste board isn’t a solution for all cases, however this would be a good one for just that IMO.