I have a clock project I’m working on and would like to do some graphic resin inlays in walnut. I’ve searched around a bit but haven’t found much on what type of resin to use. It seems like each person has found what works for them or their project, but I can’t find where to start. I’m looking for something sandable that won’t take a stain, but can be tinted. Seems like an epoxy would be too hard to sand, but I don’t know. Any recommendations on where to start? Links to Amazon are welcomed

I use West System resin

West System is good. To successfully sand epoxy you are better off with a quality resin and preferable long cure (12-24hrs, can speed it up with heat curing) Longer curing formulas are generally easier to sand.
Allow it to fully harden and dont go too rough on it as it can heat/gum up = bad.
Water helps if the rest allows it.

You could also source some kind of vacuum-system so you can extract air from the mixed batch = clearer mix and less chance of trapped/cured bubbles appear when you sand it down.

What do you all recommend for coloring the resin? All I really need for now is black, but I’d be interested in others as well for future projects.

There are some food dyes that work very well, however I dont have experience with those yet. Solid colours and sparkel variants available. You should be good if you find dyes that are intended for cake decoration etc.

A video on using two-part epoxy on a diorama: Zion National Park

Hey all, I just wanted to follow up in case anyone else is curious about resin inlays and was starting from scratch like me.

I tried the ‘Castin Craft’ clear polyester resin from Michaels (linked above) with a 50% off coupon and used cheap black acrylic paint to tint (~10 drops). Michaels apparently used to sell dye specifically for this brand, but this local Michaels stopped carrying it, hence the paint. 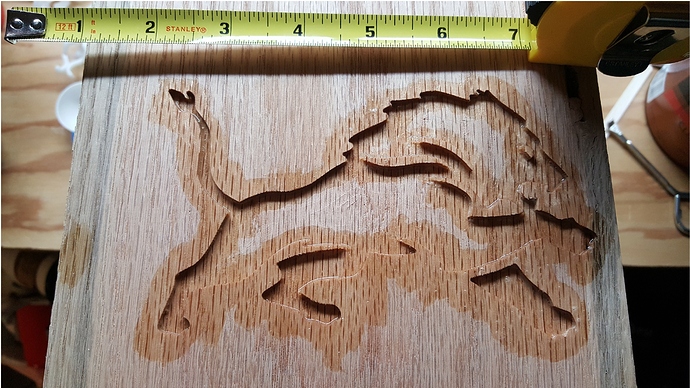 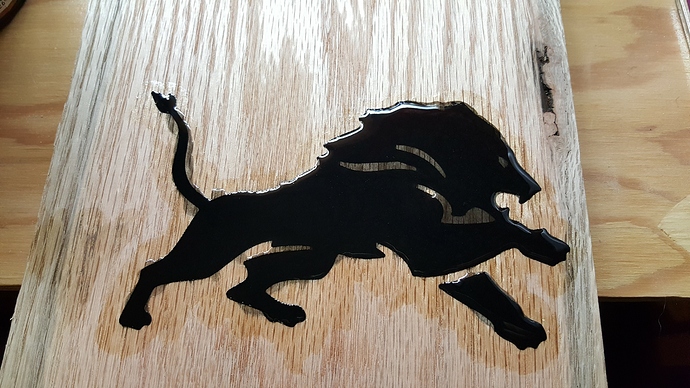 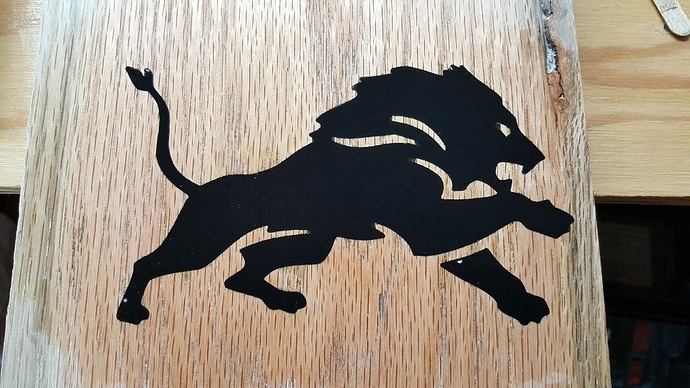 A couple lessons I learned:
-After carving, use a poly coat around edges so resin doesn’t soak in end-grain or other places.
-Be extra careful to only put resin where you want it. It’s terribly difficult to clean up off wood.
-Don’t overdo the amount of resin you pour in; if you’re careful, you can minimize the amount of sanding required. You’ll want a tiny ‘bulge’ of resin up as it seems to settle a tiny bit.
-Give it at least a day in warm temps to fully harden before sanding.
-Always test somewhere first.

Overall, I call it a success that I can use for other projects. I arbitrarily give myself a B on execution.

Thanks again for the recommendations!

One thing I’ve found that helps tremendously with the color saturation is to paint your pocket the same color as your tint. In this example black. It makes the epoxy look opaque and you don’t see the wood behind the inlay. Lets you get away with less additive to the epoxy itself if your concerned about hardening issues.

Alumilite is nice but a lil expensive depending what your doing as size but they do have nice colors to mix for dyes and powders. There is also the cheaper stuff at hobby stores and ace has a small kit for about 20 or so dollars or almost $60-70 for a gallon. Alumilite is about 30 for the small size bottles and gal size is around $116. Prices could of changed but certain ones are nice for small to larger jobs depending what your doing. Alumilite can be pressurized if the parts are small or if you make a large enough casting pot or find one that a certain company makes.

I like Art Resin- found it online and use Jacquard’s Pearl Ex pigment. I haven’t experimented with mixing pigments, they’re expensive so I stick to a single color mixed into the epoxy. I found the Art Resin repeatedly referred to as ‘food safe.’
Attached are images of a customized clip board (no coats of polyurethane added yet in this photo) I’m working on tonight, as well as a cutting board (finished with mineral oil and beeswax mixture). I haven’t gotten brave enough to try using a contrasting wood for an inlay- that’s next! 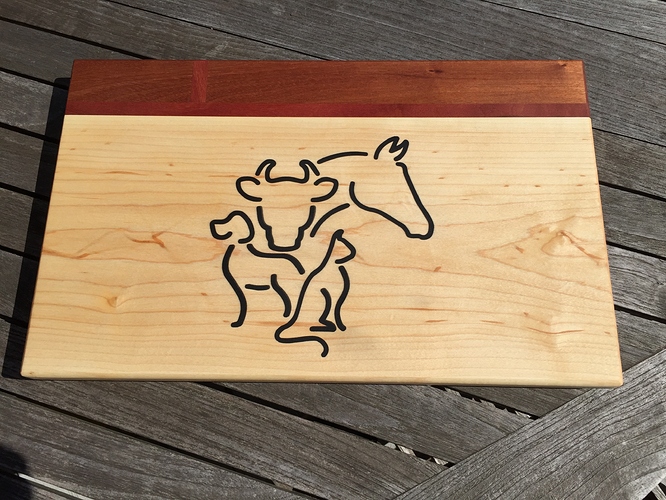 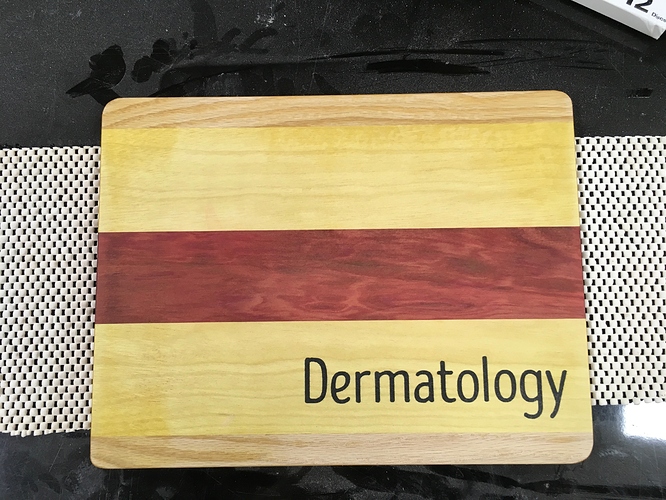 I have started using Pearl-Ex pigments and they work pretty well. When you sand them, they do lose their luster quite a bit. If you’re using an oil finish it helps it pop, and so does poly-acrylic. I’m sure plenty of other finishes do the same.

Here’s a test piece I ran in pine prior to making it in 4/4 8x19" walnut. The epoxy I’m using is Epox-It 80 from Specialty Resins. The Pearl-Ex is turquoise. A little Pearl-Ex goes a very long way like 50:1 resin:pearl-ex. It sands well as long as you don’t heat it up too much. Planing and 220 work the best. 150 grit belt sanded and patience if you don’t have a planer, or you can level it with a surfacing bit on your x carve.

The idea for this sign was to sit where it would be back lit with the appearance that the wood is floating in the resin. I get a lot of “how’d you do that?” with this one. It went over very well at our family white elephant this year. 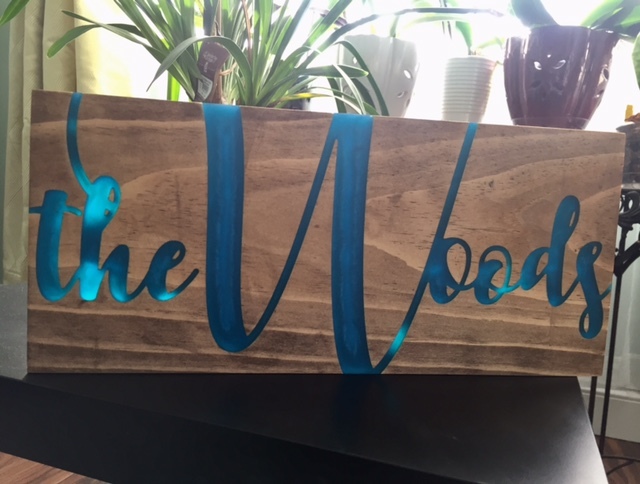 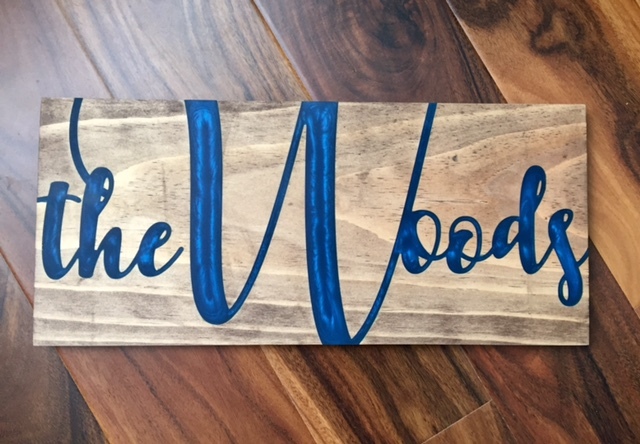 I don’t see it mentioned yet, but if you use West System epoxy, use the SLOW hardener (#206). It will give you plenty of time to paint inside the lines without worrying if it’s hardening in the mixing cup. Also syringes are good to squirt into small areas instead of painting or pouring.

I’ve used ArtResin in my projects. I did an epoxy inlay on a cutting board here and also discussed some lessons learned I had when mixing and pouring. I just used some acrylic paint as a colorant:

This was in an inventables documented project here with some nice photos the inventables folks took: 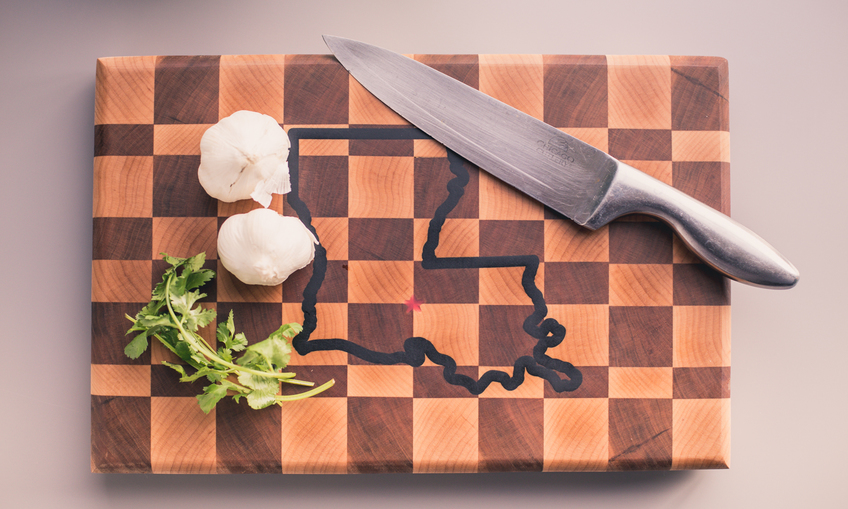 This project goes through the steps to put a food-safe epoxy inlay onto a cutting board as well as general epoxy tips and tricks.

ArtResin can also be very very clear, so I used it for some playing card inlays which you can also see in that video.

What did you use as a finish when you were done drying/sanding?

Looks great! Question for all folks: I’m having difficulty removing the scratches/lines from my epoxy pours despite waiting 24-48 hours and going through all of the grits…anyone else experience this problem and have any advice?