Just wondering what people thoughts are on a good wood planer between 300-400 bucks. Thanks in advance

I second the dewalt735. it’s been great… I also set this up (link below) and it is really nice to use. After calibrated, it is dead on 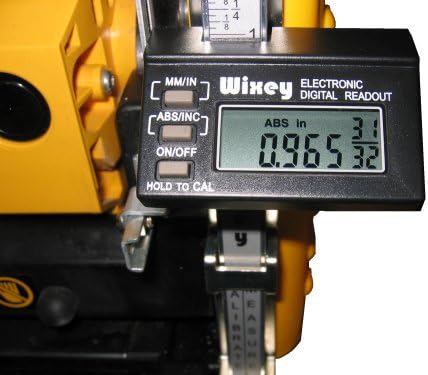 another brand i considered, was the WEN. I own a bunch of other wen tools that have been awesome.

brief review of them in case you happen to be looking into others.

10" bandsaw - for the price, it’s been excellent… 6" resaw height has come in handy

jointer - this has been pretty nice so far. need to replace or sharpen a blade since I nicked it. not the machines fault

oscillating sander - it does the job. wish it had slower speeds though

belt with disk sander - no complaints.

if you look at the reviews, a lot of folks compare them against pricier models and claim they are just as good.

Anyways, figured I’d leave this hear for you and anyone else who might be looking for tools on a budget without compromising a lot of quality.

I have a Ridgid 13" that has served me well for almost 10 years. The Ridgid stuff can be hit or miss. I bought a 14" Ridgid band saw on the same day and it has been, hands down, the worst piece of garbage tool I have ever owned. The planer has been great.

Another for the dewalt 735. I just sold mine ( upgraded to powermatic ).
Watch CL but be fast on the draw.
Rockler and other places do deals sometimes were you can get a free stand, extensions, or gift card.

The “lunchbox” planers tend to be very loud.

And the Wixey DRO is priceless!

Appreciate all the input which the dewalt 735 is amazing. Little bit out of my price range. What does everyone think about the dewalt 735. I just need something simple to plane hardwoods or soft woods doing cutting boards and signs

The only thing to keep in mind about the Ridgid warranty is that some tools have to be sent to a service center and the stores won’t honor it on site.

I learned that the hard way with that band saw when it started falling apart bit by bit. I wasn’t about to crate it up and ship that monsterous pile of cheap metal. I ended up swapping out the main assemblies with after market parts and balancing the wheels.

I’ve got the 734 and just added the Wixey last week. For the price it’s been a workhorse. I just found out that it has a thermal shutoff that was a little frustrating but after it cools down it fires right back up and runs again. I was running it for about 15-20 minutes straight planing down oak so it was working when I fed the planks through.

The Makita 2012nb rates well as well, recently sold mine to upgrade to the DW735 and I’m happy with the performance of both of them.

You’ll get great use out of it. Get that digital read out… It’s an awesome upgrade and makes life way easier with it.

It’s not too bad… took some time and was a bit of a frustration dealing with the small screws, but after it was done… totally worth it… not sure how it would install on that model, but I’m sure a way can be found. just do some searching and you will probably find others that have done it.

Zeroing the machine is really easy. My recommendation… plane a board, then measure it and set it to that measurement (which you can do with the zeroing process… it doesn’t have to go to zero). after this everything will be within a pretty crazy tolerance.