heres my first go at this project. i was roaming around the internet when i found a traced image of my redeemer from star citizen (which i spent to much to get. please, don’t remind me of it). and i figured it would make a nice piece and so i converted it to vectors. thanks to the wonders of technology. it didn’t convert well. low res image, and even lower res import to vcarve

. but that didn’t stop me. i took it to the next level and hand drew the vectors to the image. head to toe.

and heres my result. i of course did it in birch plywood. so alot of detail was lost to chipping and splintering. my final version will be cut into a nice wood, and the ship stained dark with the background light. but id like to ask. what would you guys suggest for the final piece. what wood will chip the least, most all of them stain nicely. but i need to be able to get at least 1x2 feet. but id like to go to my max size and cut 1.25 x 2.5 feet

i also need to repass some spots. the nose hardly cut and i finished it with a knife. and the top turret is a bit mangy. but the body and right engine came out incredible.

also. i cut it with a 90degree vbit. i really like vcarving 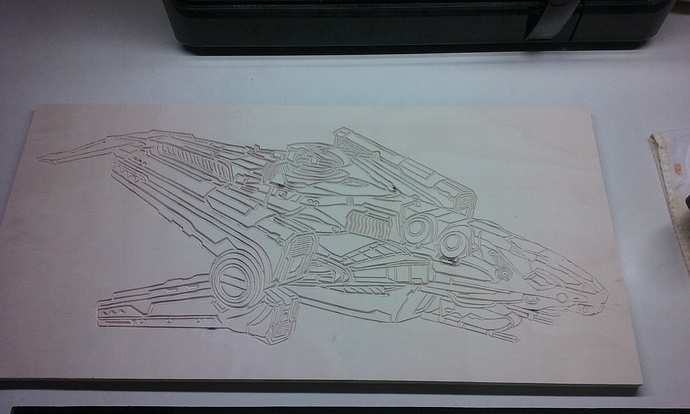 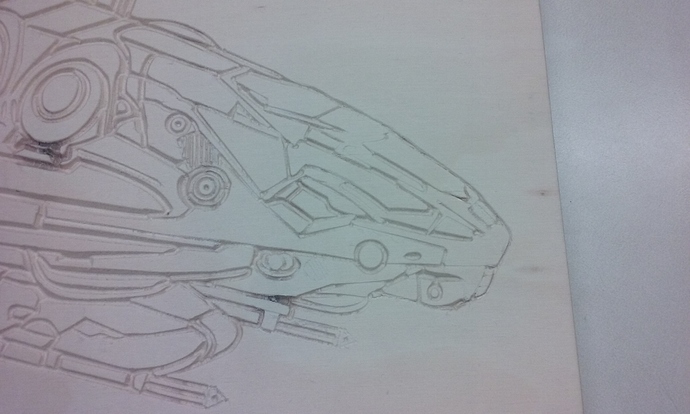 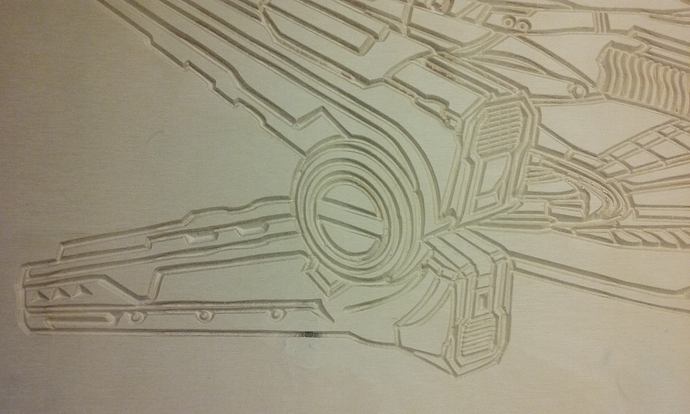 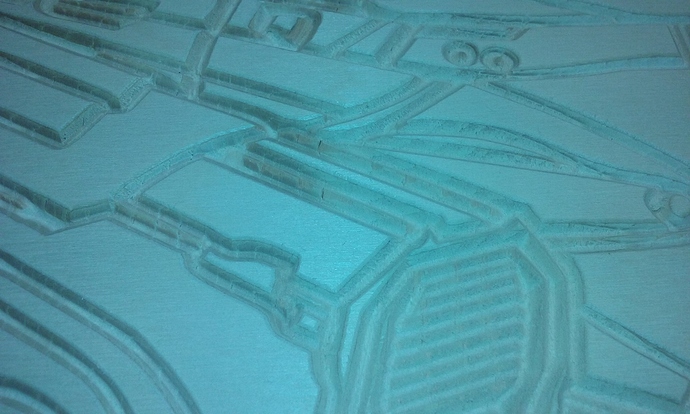 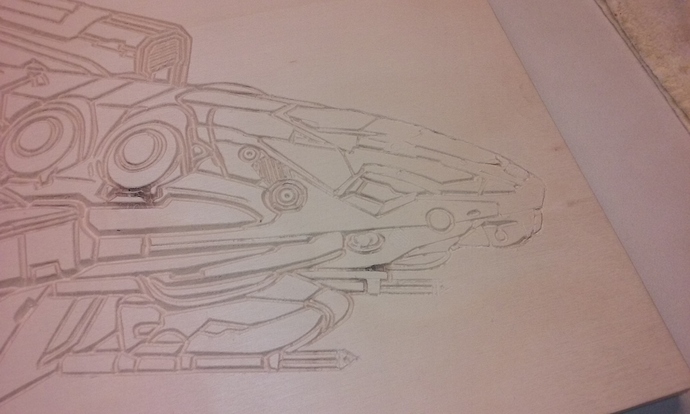 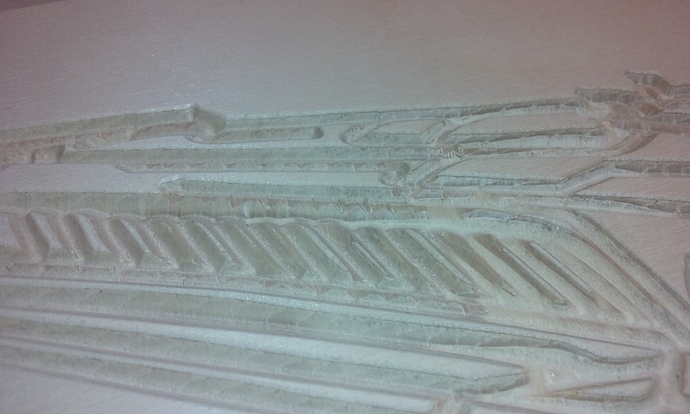 First of all, very nice! I love seeing people making stuff other than clamps and dust shoes. Now on to your post. Do you have leveling issues or was your work piece not true? Before working on more expensive stock, I’d resolve that issue. If your Z was constant on your carve, the nose shouldn’t be any shallower.

The top veneer layer of plywood is relatively prone to tear-out, but if you go with solid wood, you won’t have that trouble. Maybe try some poplar. It’s a soft wood that you’ll be able to machine with hopefully less trouble. You can then spray the carve black, then sand it down or roll the surface with white paint to get the contrast.

Keep us posted on your progress!

yeh i dont think it was a leveling issue, but ill check it with a level. as well i believe it was vcarve’s fault and mine for not noticing. but vcarve lowers the resolution of everything i import…right down to complete s***. and my starting image was low res to begin with. so the vectors towards the nose are very thin and therefor wont cut deep. but it still should have cut deeper than it did. odd given the rest almost cut to deep. i do like RobertCanning,s idea of useing 2 tone plastic but i still really want a stained wood version. ill probably do both if i can find a nice enough piece of wood at home depot.

a question regarding burning. i was running at 1000mm per minute, and at setting 4 on the dewalt. it was very smooth and gave no problems on the first pass but then it comes around to clear the other side, and burns it because its just rubbing material thats already been cut. is there a way around that.

edit: boom it just hit me with my problem. i just debugged my dust shoe so it wasn’t warping my cut but my shop vac has still been layed across the floor. and on the left its adding weight and when it comes the the right it pushes the slack to the point where it could bind and push up. because upon review the vectors look fine. ill post the updated version when its complete ill post it in projects section. i did just relocated my cnc. and i want to prop up the vacuum hose so that it hangs and disturbs the cut as little as possible

vcarve file and project pictures.
layer 2 is refined vectors and layer 3 is original vectors imported and 87% thereshold.
bonus points if you can tell me why vcarve insist on loweing my resolution. as the original image wasnt terrible till it was imported. also included in link.

It’s always something… Nice diagnosis, Holmes (Sherlock, not John). Nobody on any forum would’ve been able to figure that one out.

ill run a test tomorrow with a hanging setup to see if it dips or raises in each corner. probably grab a big piece of scared wood and run a spiral square with a set depth to check for high and low points everywhere

i was having Z issues, and after discovering that i mayb be an Idiot,I also discovered that the screws I used to hold the work down were running into the square tubing in the center, lifting a hair up on the work piece. (I am saying this because I was thinking the issues were way more complicated than they were.)

completely redid my whole room. the xcarve’s been sitting on the floor for over a month and a half now and its time for a proper set up and retune. its far less flexible now and doesn’t have the strange forces from the shopvac any more. and i added a dust shield around the sides that literally just fit and im pretty happy with it, and i used some spare screws and the threaded inserts. it was throwing alot of chips out in the old setup even with the dust shoe. and it wont stop fine dust in the air. but it will catch chunks and bits. and the clamp holes on are just the right size to hold my 1/4 bits, since i dont have a case for them.
now i just need to move the pc. because its literaly under the front of it.

now back to the project. i found some 3/4inch red oak at the home depot and i believe im going to use it for my final cut. but ill need to retest my cut in plywood to see that its good. 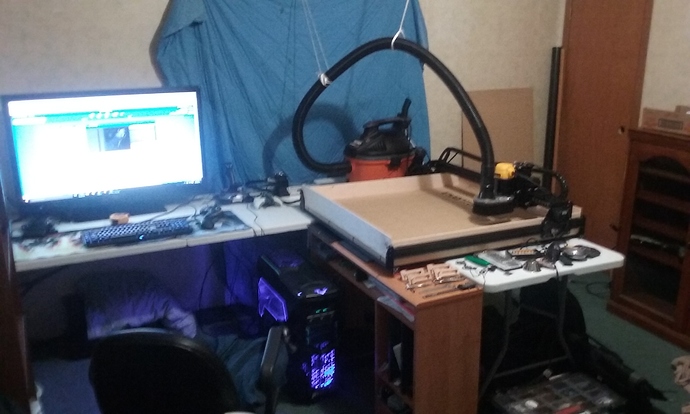 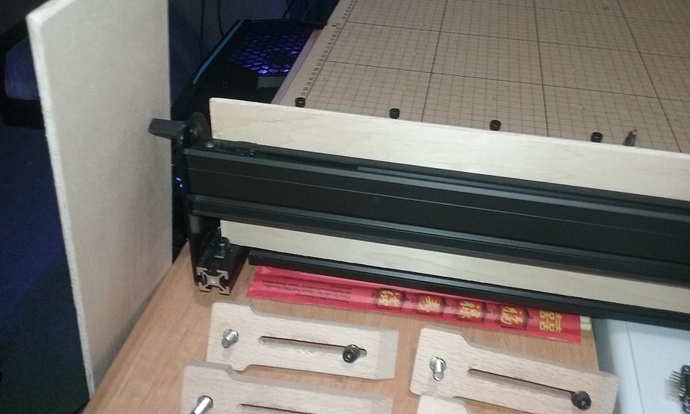 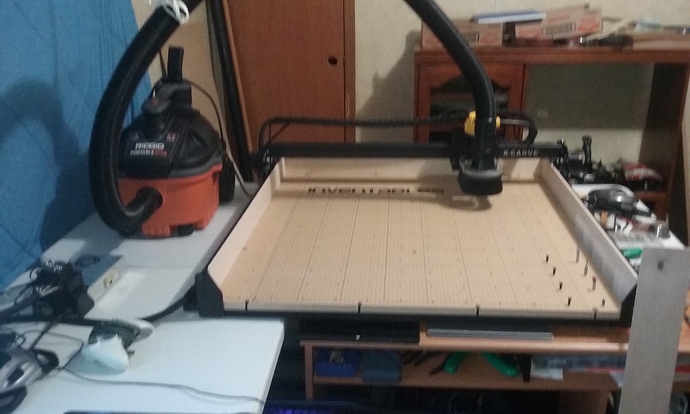 new setup ran great on second try. i ran it long enough to get it to the head. the old fail zone. and bam. perfect cut. wait spoke to soon. it left a skimpy trail to the tail. Jesus. i releveled the whole thing and recalibrated and retuned everything. and then i hung the vacuum hose to remove weight from the spindle.and even took the vacuum off midcut.

ah but of course. the dust shoe was dragging. this thing likes to prove that im an idiot. but on second thought, it didnt mess up the early cuts. well. ill just flip the board and try again later.

well. im done for the night. ill fight with it tomorrow night

I am not sure if this is a file issue or a import issue.

Go to the material setup tab, there is a file resolution setting you can adjust:

I also read somewhere that the file resolution is a % of the work area, so you don’t want you work are size to be dramatically bigger than your project. I used to set up the material as the max size of my board. Now I just size it to each project.

If that doesn’t work try exporting it from you vector program in EPS format.
That is what I use to import vectors for VCarve. It wont import SVG and for some reason DWG files exported form my copy of inkscape get all screwed up.

Im thinking of converting to inkscape or something else for my vectors. But draw them in vcarve once i have something to play with.

And i think what you mean is the the image was auto scaled to the size of my work space.
And i dont know what modeling resolution does. Ive tried every setting, and just left it at 7. Because my models still look good and low res to.

Seriously vetric. This is a program for sign making companies, and all i see is limits. Jesus. I have a 970gtx. I can handle it. And i want the option.

Sorry. Bit of a rant

ok. so it has been a while since my last post. i got a bit distracted with some other money making projects and some other things. but after a complete and total recalibration, resetup, and new style of doing things. i figured out the problems with my old cuts. and fixed them. and after much work i have this now. i cut it in red oak.

i will include the gcode and vcarve file for anyone who wants to make there own
the gcode is ment for 11,1/4foot by 2 feet. which is the widest size the local home depot would sell me red oak in.

and the vcarve file will load the old vectors and new vectors on different layers. MAKE SURE you select the right one if you decide to play with it. note that if you make it smaller. the detailing will turn to crap. i tried. i way over did it. and it looks best cut big. 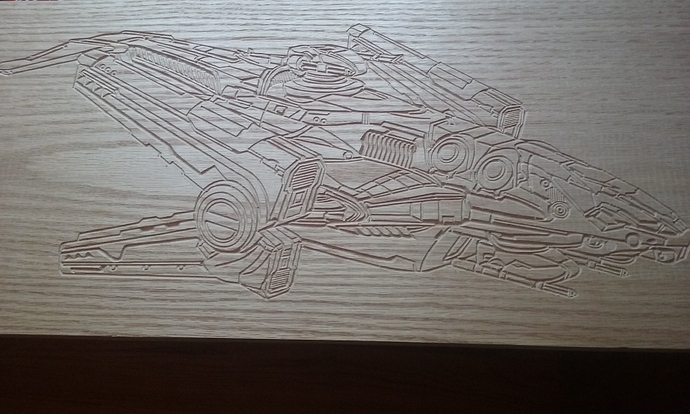 if your going to do things on plywood you have to treat it firs or you hit a pocket where the layers are not glued or came unglued. I am not sure what its called but there is a type of coating that soaks in and when it dries it makes those areas not chip out.

That would be pretty cool. But ive already transferred to hardwoods. Finally found a place near home that sells the nice exotic stuff