Greetings,
Use chilipeppr with the xcarve. When running jobs, and changing tools its not obvious to me how i make sure that Z hight is the correct, after change, i have a feeling that none of these do anything, I would expect that i can do a “Run prope to zero” to get the Z level, but nothing happens when i press it 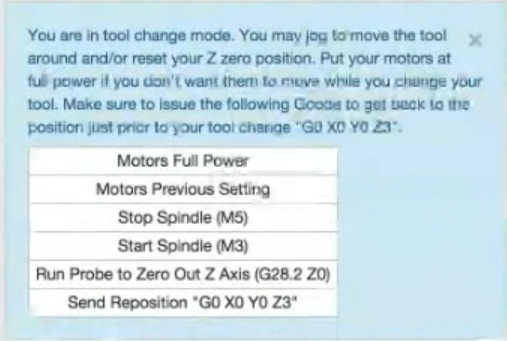 What am i doing wrong.

If you’re running a touch probe, that is the option you want. If you are not, then your process is simple enough. Just jog your height with the controls on the right side of the screen until your tool tip is just barely touching (or however you normally set zero) then hit the drop-down next to the Z-axis, and select “zero out”. Jog it back up a bit, and you’re good to go!

Hi Dan,
Thank you, i have the probes for the autolevel, this is on PCBs btw. So i thaught i would be able to this as that as part of the tool change process, but nothing happens when i press the “run probe to zero out”

Interesting! I have my tool changes almost universally just set up as separate programs, with a return to G28 home at the end of each. So I just load the next program along with the next tool, use the touch plate for length, then run it again. I haven’t tried using the tool-change functions since I had those problems with G28 at the beginning. Just got into the habit of splitting the programs up.