EDIT: I resolved it

When the program runs, both the x and y jerk slightly, and throw the machine off course.

This happens when I move it manually as well.

I’ve adjusted the belts, and glued them in place. Also, I’ve adjusted all of the eccentric nuts, probably 20 times today.

Also, I tightened the X axis, and have messed around with the Y axis, thinking it may be a misalignment issue.

I’m wondering if anyone spots something I’ve missed, or could have done incorrectly?

Thanks for your help.

How did you end up resolving your issue?

With an incredibly complex, and brilliant plan.

the bigger question in my mind is what lube went where? wax on the rails and lube in the bearings? THX

You might want to look into a dry lubricant. WD-40 works, but will attract dust like a magnet grabs metal.

I already hooked up a “dust collection” system, so it really isn’t an issue yet (repurposed a bench brush with magnets).

Sprayed some wd-40 on the exterior of the v wheels on the eccentric nuts, and used a minute portion of paste wax along the rails where the v wheels ride. I know the wd-40 didn’t do anything to the bearings themselves, it just helped with the friction between them and the washers.

I’ve been running it all day, and there hasn’t been an issue. I may add some plumber’s tape to the eccentric nuts if they act up again.

WD-40 isn’t actually a lubricant and shouldn’t be used as one. Get some teflon or silicone spray and use that to lube the v-wheel surfaces. It’s a dry lubricant, as Larry suggested above, and works like a champ after the solvent has evaporated from the surface you applied it to.

Also, you shouldn’t have any friction between the bearings and the washers - or more correctly, I guess, you should have all of the friction there. The center of the bearing should be completely stationary while the outer race rotates around it. If the center moves, your hardware is too loose. There’s no need to apply any extra lube on or around the bearing surfaces.

This is what I am using… 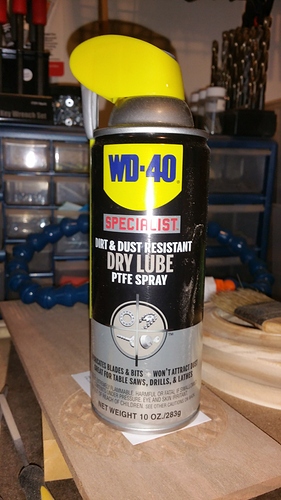 But, regular WD-40 is not a good idea…lol

I understand your qualms with wd-40, but sometimes a solvent is enough to clean out the mating surfaces of bearings.