I would suggest starting here for one of at least two stiffening mods:


That one is totally reversible with no drilling required.

The other option is this one:

Search "width of x axis makerslide". Pictures will be found.

What’s a 800W GMT spindle?
I’m getting the unbearable chatter from the stock spindle too - it’s horrible!

Just looked up GMT spindle on Google. They look very nice but only available is USA? I doubt they’re available in the UK - can’t buy anything in the UK.

Carried out the stiffening mod and it’s got rid of 90% or the resonating. Just need to upgrade the spindle and I think I’m there.
Cheers

Good to hear that. Which mod did you end up going with?

I used the simple one. The bolts in the gap between the maker slides. A quick visit to the hardware shop, 10 mins of fitting and it’s a lot better. Just got to get rid of the screeching stock spindle now.
Looking at this one.
http://www.ebay.co.uk/itm/0-8KW-ER11-AIR-COOLED-SPINDLE-MOTOR-MATCHING-1-5KW-INVERTER-DRIVE-VFD-CNC-/201484921885

You’ve got the GMT spindle which looks great but I can’t find one in the UK. I assume you control the speed manually through the VFD rather than through G-Code so your GMT is the same principle as this eBay model. Not the same build quality I would guess but it may do the job. Any views on this one on eBay?

I remember reading some people buying the ones of Ebay, and I don’t recall hearing anything negative about them. Hopefully someone who has one will chime in and give you some feedback. I’ve been looking for an air cooled spindle and VFD for a while now…just waiting on saving up enough $$ to buy one.

Ive got the inventables quiet cut spindle. I also had to go witha 48 volt power supply to run it and added a speed controller as well. I run the 24 v supply to feed the steppers and control the on/off of the spindle manually.

Ordered the eBay spindle today. I’ll report back next week when I’ve got it installed.

I have the spindle shown above… so far no problems at all!

I love mine and I have put it through some serious work in the last few weeks.

Fingers crossed you should have the same experience.

Mine arrived Monday and I tried it for the first time last night. I think it’s great too. Only thing I have to sort out is to redirect the downdraft away from the work so it doesn’t blow dust everywhere. I little job for my 3D printer.
How did you mount the spindle?

If it’s the 65mm spindle, you can purchase the dewalt 611 mount from inventables and put a shim between the mount and spindle (I think some people used thin sheet of styrene or even aluminum). That’s the route I am going to go whenever I purchase a new spindle/vfd.

I am buying a VFD spindle from automationtechnologiesinc.com (this one specifically: http://www.automationtechnologiesinc.com/products-page/cnc-spindle/800w-air-cooled-cnc-milling-spindle-kl-800a). It says its 65mm OD, as I've seen that's what's recommended, but its not clear if my existing mount will work, or if I need the new dewalt 611 mount. I have the 24v spindle that came with whole kit that I got about 5 months ago - before they discontinued that spindle and started recommending the dewal…

I printed one. It works OK but there is a little bit of flex in the mounting plate so I think the final version will be a combination of an aluminium back plate and a 3D printed spindle holder. 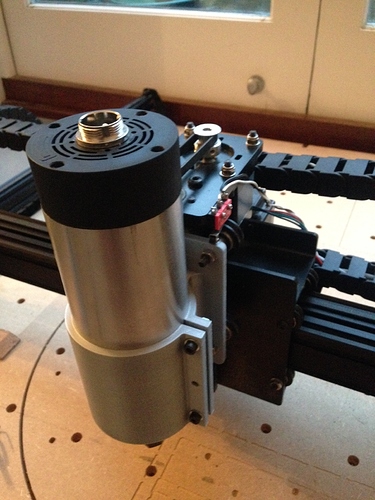 That looks nice! Is your new spindle a lot heavier than your old one?

Yes. I only had the 300W stock spindle before which was just a tiny motor. The old spindle weighs 0.5kg and the new one 2.3kg

Simon. Have you done anything clever with the control of it? I notice on the VFD that it has various connections so that it can be controlled remotely rather than using the buttons on the control panel.

Clinton, the only thing I have done so far is wire up a potentiometer to the vfd to adjust the rpm easier… although it is not that hard with the original faceplate controls. I have also toyed with the idea of installing a switch away from the vfd. Are you planning to operate it remotely via your software… I’d be interested in hearing about it!

I mounted mine use the inventables Dewalt mount (shimmed with some 3mm adhesive foam), works like a treat. I’ve attached a pic below. 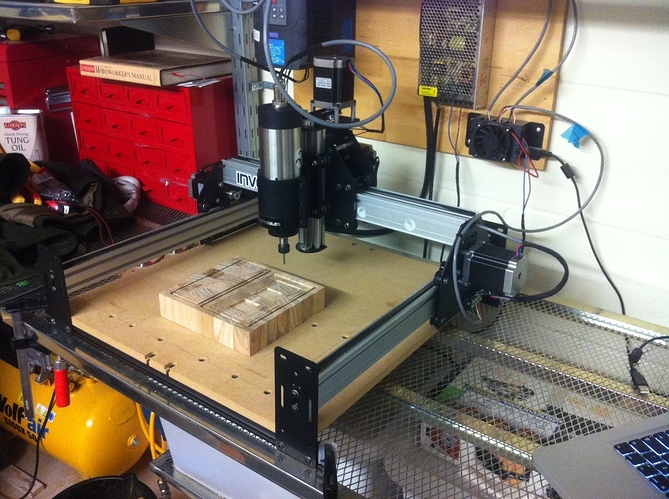 When my electronics expert friend returns from his holidays I’ll pick his brains to find out what’s possible.

Back to my resonating spindle gallery though. I’ve cleaned and adjusted everything and I’m still getting shuddering in X and Y directions (it may do it in Z too but I can’t tell). It’s as if the steppers aren’t running smoothly. I can’t think what else could be the trouble.
I’ve set the x-carve to cut a large circle in air and I can hear the motors vibrating. If I hold either y-axis gently I can feel them vibrating. It must be the motors vibrating because it’s at quite a high frequency.
Has anyone had any faults like this with the stepper motors?

Made a bit of progress (I think) on the shuddering steppers. I’ve updated the arduino Windows drivers and things seem to have calmed down. I’ll do some more tests but fingers crossed that was the problem.