Hope this isn’t a repeat, either. Ran into this today. Context is I’m milling out some weight reduction holes in what’s going to be a 34" x 11" keyboard tray with side rails for additional trays (for HOTAS - hands on throttle and stick). I have the 1m x 1m Xcarve but with the dust collection attachment I came up with (yeah, not showing mine, it’s a thing of horror) and shrink-wrapped belt ends and the like, my actual USABLE span seems to be like 24-26" max in either X or Y. So I’m having to build projects that represent one half of the 34" length at a time.

Realized it’s really difficult to just grab a whole bunch of objects and rotate them all a precise 180deg or 90 degs or whatever…you can’t necessarily ‘combine’ if you have a mix of fills and outlines and different depths so you can use the actual item rotation attribute, so a ‘group’ would be nice and no doubt has been asked before, but short of that…why not define a whole bunch of cuts on a given workpiece and then just tell it to either rotate or mirror the workpiece? (Mirror would let you ‘flip’ the workpiece if everything was just a thru, vs. ‘swiveling’ it on its back).

In other CAD tools I guess what I’d use would be a new working coordinate system.

I attempted to just draw the whole project then make a copy, deleting one half of the objects from one and the other half from the other, then rotating the 2nd, keeping a couple fiducial holes around as a way to line things up (e.g. the first part had a small hole right at 0,0 and the second had one at (11,34) that got rotated back to (0,0) ) but somewhere along the way I set the bottom right corner of a circular hole to a known position, not the middle of it, and everything was off by the fiducial hole radius in addition to my part repositioning/reclamping errors. If I do this again I’ll keep some excess to one side of the finished part and manually drill small pinholes that I can pin to a known position on the wasteboard and call ‘zero’ each time, but seems like Easel could also help out with multiple-carving-run projects on larger pieces that hang off the usable space.

Or is this all just me being crappy at either defining my zero or design?

You do realize THIS is a sub-forum for suggestions for improving Easel, not telling people “just go out and spend $250 for something else”…right?

Any number of other CAD/CAM tools could do what I describe and far more. That is entirely beside the point.

After two days without a response I just didn’t want to see you so lonely. I don’t have any experience with Easel so I can’t speak to that. But the bigger question is what did you do to make your useable workspace so small.

It’s true it’s a free program. While I feel they should continue to improve on it. I’m not willing to wait for the months/years it takes them to catch up to the things I could be doing now.

@CurtisCummings, “what I did to make my workspace so small” is already in the original text. I could probably push a bit further than that, but as I’m still starting out (despite owning the machine more than a year), no rush on my part. I’m still never going to get 34" of usable travel without a full rail redo …official specs for the 1000x1000 X-carve state the work area is 750mm…you do your own math and let me know where I’m screwing that up.

@BobJewell of course I do, but the forum is called FEATURE REQUESTS so gee I thought maybe I’d make one. Even if I decide to pursue $$$ software in the long run it might help others. Inventables clearly intends to update Easel (witness tool change operations, evolving and improving tool paths, incorporation for the new zero plate, and the slow but steady proliferation of apps), no matter how slowly. Maybe this falls to the bottom of the priority stack, I really don’t care, but it’s here as feedback.

Telling people to not bother to put suggestions in a feature request forum because “free” is kind of…the opposite of the helpfulness I find elsewhere around here. Weird.

I can see his guy isn’t really interested in help he just wants to make statements and then be a smart ■■■ to anyone trying to help out. 24-26 inches because of some kind of dust boot is odd. Your dust boot should not take away any usable space.

Wow. This is really weird. What is it about a simple ‘move or rotate all’ suggestion raises such ire. Is it because some of my distance limitation is self-inflicted? ANY dust boot mounted to the left or right of the router instead of ‘in front of it’ will sacrifice some distance, unless it’s narrow enough to not overlap the carriage. Does that make the suggestion something I should pay money for instead?

Sigh. Never mind. Look over my history before you declare me a smart ■■■, please.

No but to respond the way you did to begin with is probably what prompted the type of response that followed. But please. There is no need for this to go down the road that is is. I apologize for any bad behavior on my part. We are here to help. Unfortunately as @BobJewell has stated. Easel is a free program. And the time frame associated with any upgrades or modifications is not a proactive solution to an immediate problem. I suggested a Vectric product because they do everything I have seen a feature request for. While I am not a Vectrcs employee and have no associa with the company. I feel it is well worth the money. So please let’s have a look at this dust boot.

Thanks for toning it down, hopefully I’m doing so as well (please let me know if I’m failing) but…can you see where simply replying “Vectric.com” (and a reminder that free is free, from Bob) might not seem like help? I know Easel is free, and I also know I can always throw money at the issue (ditto with the dust boot ;))

Maybe I overdid my spiel to put context around the suggestion but the whole dust shoe issue is totally beside the point. For a 34" long subject even without it, the job wouldn’t fit the table in one go, and I’d make the same suggestion for Easel. But if you really must see the shoe I’ll post a pic after I get home (elsewhere, doesn’t really belong in this thread).

Feel free to mock that all you want - I already did. Stubbornly trying to roll my own and got what I paid for there…if that.

Yes I can see that simply putting Vectric .com could be taken that way. I actually had a much longer response when I realized. "I don’t know wth I’m talking about with Easel so I erased it. I’m an Aspire guy. So if I was truly going to be of any service that’s where it would be. So I didn’t mean anything other than “Check this out and see what you think”. The products really are worth it and already do it all. While I don’t suggest going with Aspire unless your going to be doing really complex 3D stuff. VCarve is awesome.

And YES. At this point I HAVE to see this dust boot lol so please tag me when you post the pic. I have a simple dust boot I cut out when I first got started that actually works really well. I’ll find the files and see if it’s something that may interest you. If so I’ll put the gcode in hat post.

Argh! The inevitable ‘edited for brevity, got taken the wrong way’. Been there, lived that.

Hatchet well and truly buried; I do appreciate the desire to help. I read both you and Bob’s history and didn’t think either of you were “that kind” of poster either.

I do want to try non-free software too, after I wring what value I think I can out of Easel. Vcarve is the #1 contender already, although I keep also considering MeshCAM since I really do want to go more the 3D direction than just signage, and I do have other SW to generate STLs. Probably another bad call but will ask for more advice when I get close to purchase.

My cheesy dust boot is an attempted 3D printable fixed design (set to relative height then lock vs. brushes or wipes), around some existing Rockler hose I already had. Promise to post - may not be tonight but I will “@ you” when I do.

I tried the free demo’s of VCarve and Fusion when I got started. Fusion does some really nice work but is difficult(was for me anyway) to use. Lots of people swear by it though. So try the demos first and see what works best for you.

Did you ever get a helpful response on how to rotate your project in Easel? I have the same question. 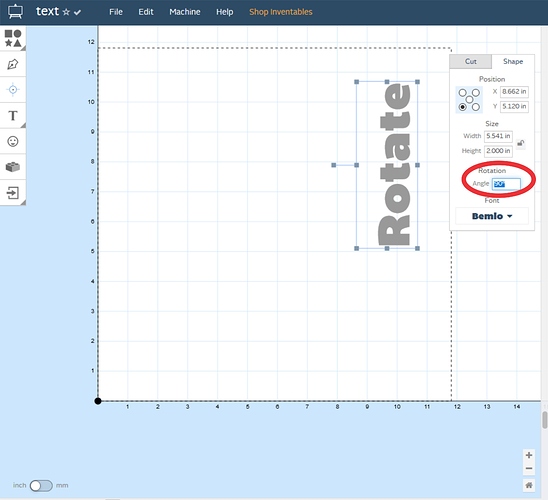 I brought in an image that is crooked. I straightened it the way I want it and now I want the new image placement to be 0 degrees, not whatever I turned it to. Possible?

Yes, create a small circle and place it overt something and go to edit and hit combine, that will combine the 2 shapes and set the rotation angle to 0

Thanks! But now it gave me a million edit points which I don’t want - lol

It shouldn’t give you more edit points