So here’s the problem. I’m cutting a sign and using .125 & .0625 bits to carve out letters, and I’m cutting outline sign shape thru 3/4" material, but for some reason Easel wants to only use the detail bit (.0625) to thru cut the outline. What gives? Why can’t Easel use the larger bit for the outline cut. This happened on another project and it took way longer to finish due to using the smaller bit. Plus the smaller bit isn’t long enough to cut thru this 3/4" material. Anyone else have this problem or am I doing something wrong.

Yup. This is the way they set it up. Waiting patiently for the fix.

you will need to run it in two sessions as far as i can tell to use different tools.

I’m referring to the beta testing rough and detail (2 cut) app but understand what your saying.

Yep, that’s what I figured Tony, that is set up that way in the app. Are they aware of this problem and trying to fix it?

gotcha. how do you access the beta? I am a rhinocam user myself but would like to see where they are taking easel.

You can ask Jeff Talbot here for access to this app.
https://discuss.inventables.com/t/two-stage-cuts

When I asked about this, I was told that it just worked that way. I don’t think they plan on changing it, so we need more people to step up and say they want it fixed.

I noticed this limitation/behavior of the beta Rough/Detailing implementation as well.
It truly handicaps usage of it.
Once you know about it, and pay attention to it, one can workaround it.
However I still think this is not the desired behavior that most users will want.

Another nitpick:
I have noticed that paths that are already cut by the roughing bit are unnecessarily cut by the finishing bit as well.
Example: a square being inside cut with a 1/4" and a 1/16". The 1/16" bit still follows the inside walls of the square. That material has already been cut by the 1/4" bit. Only the inside CORNERS of the square truly need cutting by the 1/16" bit.

I’m in for fixing this also. Have run into the same situation several times, frustrating!

I was just typing this same question and noticed this in the side bar. The way I worked around this is to make your project with the inside and outside cuts. On the bottom where little squares(showing your project) are click the down arrow in the upper right corner and duplicate your project. then in the first one remove your carve leaving the deep cut. In the second one remove the deep cut. its not an ideal system but it works pretty well. Not sure why anyone would want to cut out something with a detail bit. seeing as most of the time the cutting part is smaller than the shaft of the bit. you would just end up breaking your bits.

So… no fix for this yet?
I am working on a project that requires two thru cuts and some shallower details and need the detail bit to just (as the name implies) cut out the details. But Easel insists on making the detail bit cut out the thru cuts thru 3/4" material. As previously stated that bit shouldn’t do that. Shouldn’t easel have some sort of built in safety to know what the bits that inventables sells can and cannot do depth wise at least? When the Z-axis buries the 1/32" detail bit down to the shank into the work piece it ruins the piece and usually breaks the bit, and I have to think that smashing the spinning 1/8" shank into the work piece with a 1/32" cut gap to fit it into and then pushing it along that path is probably bad for the stepper motors and the spindle too.

I would love to know if there has been any sort of fix to this?

I’m cutting out some fine detail with a v-bit and then it cuts the piece out leaving a tapered edge. Which only creates more work for me.

Hello Ron,
Did you ever get past this, or find a fix? I am very new to this machine and a little stuck trying to get this project to work.

Just wandering around on this same issue you had two years ago, not seeing the little squares at the bottom that you described.

Im running into the same problem. Is there a solution yet?

Hi @RhodesRhodes the solution is to use multiple workpieces (the bottom pane)
I show how in this catch all tray tutorial, using a endmill to make the pocket, then a 2nd workpiece with a Vbit to make the Engraving, and a 3rd workpiece used for the perimeter cut. 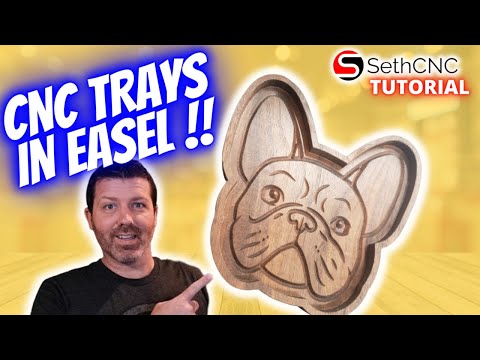