I’m having this issue any time I try a 2-bit carve where the roughing pass carves deeper than the detail pass. It seems like whatever bit I use for a roughing pass carves about .01-.02 deeper than it should (for instance I will set the carve depth for .1, and the roughing pass will carve to .12, but the detail will still carve at .1). So after my detail pass, I end up with this little “shelf” and/or deeper pockets all around my carve from where the roughin pass went too deep. I Z-probe both bits in the same spot every time, and this happens on all my carves. Any ideas? 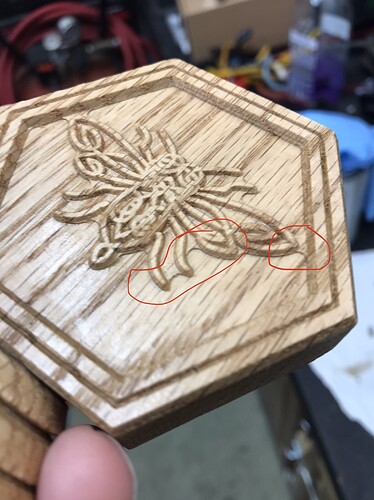 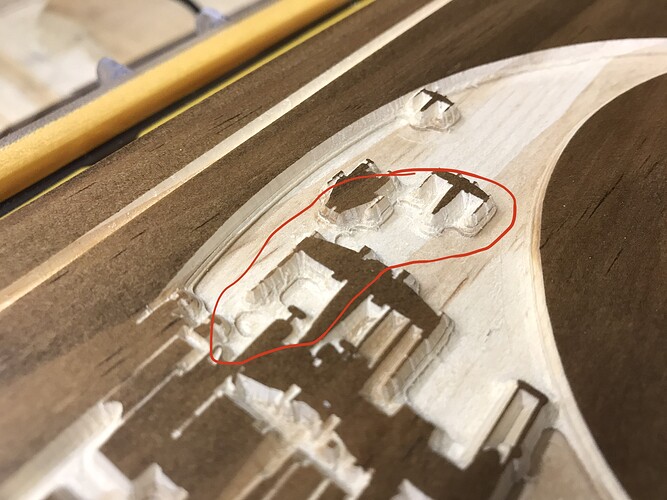 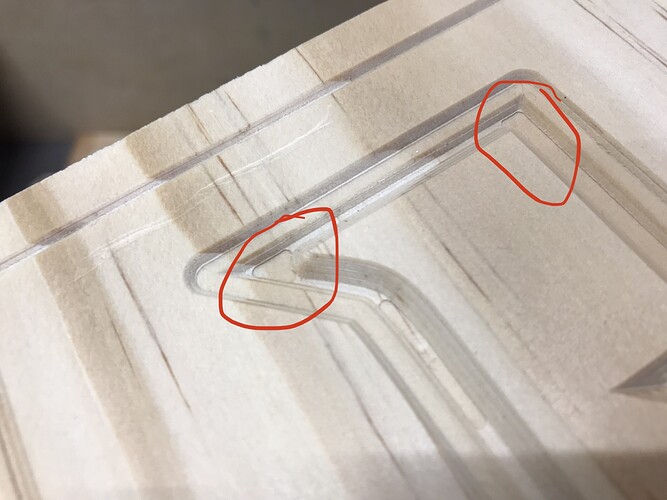 Are you using the probe? are you setting your Z in the same spot both roughing and detail? Is you material able to flex at all when you have it secured to the waste board?

I get this occasionally, I found that running my detail pass first helps.

Yes, I use the Z probe for both passes and I am sure to do it in the exact same spot each time. The material is locked down and does not move or warp. This happens with all my carves (as large as 15”x12” and as small as 4”x4”). All these boards were well clamped and .75” thick. The 4”x4” one was also red oak, .75” thick with a cut depth of .2, so I am positive there was no warping of that piece. This issue is also being experienced across the entire carve, not in just a couple of places, which also would make me think that warping is not the issue.

Is there any play in your router at all. Grab it and pull up or down on it. Also the dust boot can cause issues some times. I keep mine a solid 1/8" above the material. Also I get better results running the detail pass first.

Have you ever re-ran your roughing pass to see if it cleans it up?

I checked all the assembly components multiple times now. Everything is snug with no play.

It does this regardless of whether or not I use the dust boot.

I tried running one of my smaller carves with the detail pass first last night. I still get the exact same result. The roughing pass goes deeper and I get webbing all around the entire carve.

What bit are you using for the roughing ?

1/8” Dow cut from inventables for roughing pass. I have both bits selected in Easel and I use the inventables suggested settings for both.

I thought it could be the tip on the 1/8" bit. A ballnose may take care of that.

This is caused by the detail bit is too big to fit into the space to cut those sections to the depth specified. The bit may physically fit, but the software generating the g-code (Easel) does not think it will fit. Use a smaller bit for the detail pass and it will cut properly.

I understand that this space is too small/tight for the roughing bit to fit into. But the detail pass with the V-bit should still clear it up. Again, my issue is that the roughing pass is carving too deep, which leaves me with this ledge all the way around regardless of what size bit I use. Yes, the ledge would be thinner with a smaller bit, but there is still a drop off all the way around. My roughing passes are not carving to the correct depth even though I use the Z-probe every time. If it set the carve depth to .1 deep, the roughing pass carves at .125 deep, yet the detail pass carves at .1 deep. That is my issue, not that I am not using a small enough bit for my roughing pass.

Steve: I have used a 2-flute straight cut with the same results. I have also done carves with a 1/16 up cut, a 1/8 up cut, and a 1/4 down cut. All of them end up having the roughing pass carve deeper than what is in the settings. I do not believe it is an issue with the material or the bits being used. Something is causing my roughing passes to consistently carve deeper than they should. Detail passes carve at the correct depth, but as soon as I do a roughing pass it is like the machine adds .025 to my cut depth without me telling it too.

Here is an illustration of the issue I am having. Profile sections of what I should get (in green) and what I am getting (in red). 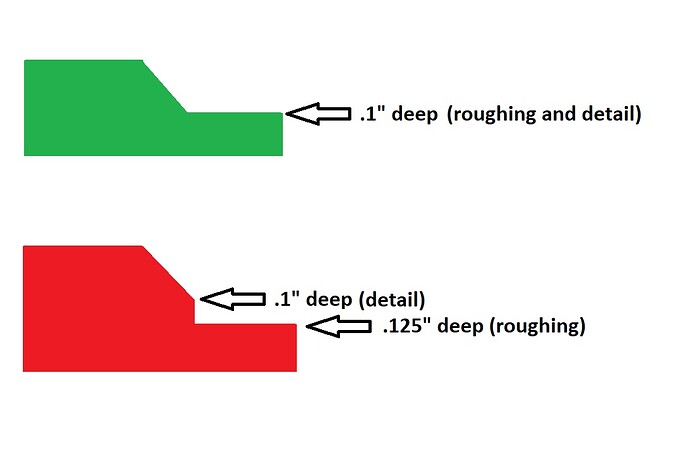 How are you setting Z-zero when you change bits?
Edit: I see you are probing.

Try setting zero by eye. Probing relies on the conductivity of the endmills which can vary. You may also try a better probing routine (would require a different gcode sender).

Yep, I have used the Z-probe every time. I will give setting the Z by eye a try to see if that helps. Would be a pain to have to do that all the time, but a may just need to upgrade the Z-probe to something better or use a different g-code sender like you suggested. Thanks!

Have you looked at the generated gcode for each tool? It looks like you are doing a 2-stage vcarve job. I would verify the gcode max Z depth is the same for both tools. It should be the same, if not it a bug in easel.

Thanks for the idea. I have not checked the g-code. I have only had my x-carve for a couple months, so I havnt dug into the code/settings at all. I’ll have to look into that though because it definitely seems like some setting is tweaked or a glitch in the software. Thanks again!