Roughing pass not doing some sections

I’m wanting to carve a basic project which was posted in the project section.
I’d like to do a roughing pass with an 8mm bit and a detail pass with a 3mm bit.
When looking at the tool path, it seems some biggish pockets won’t get done with the roughing pass but only the detail one. (pocket is roughly 20 x 10mm)
Any good ideas how I can “force” it to add this to the roughing pass?
Thanks for any tips and pointers.
File in question is:

You can’t really force Easel to place one path on a specific pass; this is done automatically in the cam software.

Although this might be a bug, it could be that the cam software determined that it would just be faster to machine the pockets out of just the detail bit instead of using both bits.

As long as the detail pass cuts it out, you will get the design shown.

I think it might be because the tool width is used to determine the “overlap” of the paths. So your 8mm roughing tool is 4mm radius, and that means a minimum of 12mm for a pass around. The little boxes that are being skipped are only 10.2mm in one dimension, so the tool can’t make one “loop” to do a pass (it could only do one single “line” which would be an 8mm slot only). The rough pass wants to do a “loop”, but that would require at least 12 mm (8mm tool, plus 4mm overlap = 12mm). The small boxes are not wide enough to do a “loop”. If you change the box size of the small boxes to 20.3 x 12, you will see the roughing pass hog them out.

I don’t think this is a bug. Fusion 360 will act the same way if you set it up correctly.

This is nor really the case…

Removing the detail bit causes the roughing pass to perform a loop inside the pockets. Unless it is determining the time will be shorter, it should let the roughing pass remove material everywhere the bit will actually fit.

This is with only the 8mm bit…and…there’s a full loop being carved in each pocket. 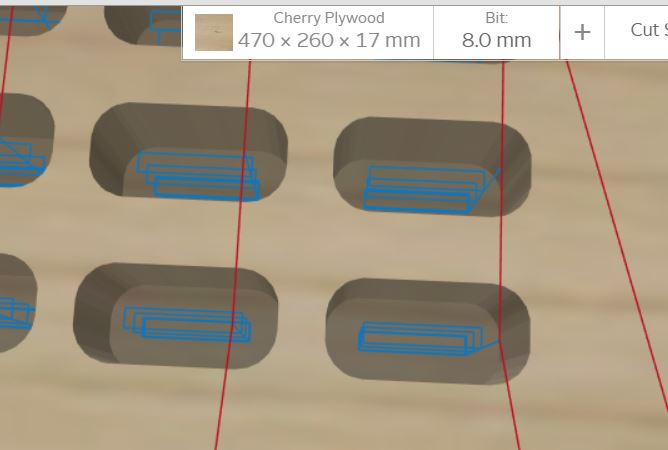 As I mentioned, it could be an efficiency thing for time-saving that Easel’s cam software is determining in the background. Only Inventables would be able to tell you what their cam software is doing on the back-end…