New to easel. need help making objects (rectangles) with rounded corners in easel. Is there a easel tutorial?

I think using just Easel that 2 rectangles and 4 circles would be the quicker way to do this.

Using InkScape or Illustrator to make an SVG is most likely the solution that most of us use, plus InkScape is free, so there’s that.

This does bring up something I’ve thought about. A “Round Corners” app in Easel. I wonder what @JeffTalbot would think about it. If no one else takes on the task… I might take a crack at it.

@FrankM, there is no direct way of doing that, however there are couple of workarounds using Offsetter app.
Method 1 (for any shape)

Thanks Ruwan, Appreciate the help. I’ll give that a try tomorrow. Having an app to do that would make life much easier! Thanks again to everyone who replied.

Thanks Angus. I did try something like that but the resulting shape seemed to the the reverse of what i wanted. the 3d view didn’t show the radius so I just assumed that this wouldn’t work. I’ll try your method and hopefully will succeed. Im surprised that easel doesn’t already have this option built in. seem like it would be a frequently used shape.
Again, appreciate the help.

Yep, in my mind there would be two sliders with imput boxes. One for inner corners and one for outer ones. Set for 0 radius to turn one or the other off. The sliders would change the radius, but the input boxes could also be used to put in a specific value.

@FrankM I’ll do a screen recording tomorrow of what I was talking about for rectilinear shapes.

@sketch42: I granted you access to the developer APIs.

We might add similar functionality to Easel’s built-in design tools, but your app might inform that feature, and it would be great to get your feedback on the developer platform as well.

I’ll start taking a look into the dev platform and see how it goes.

I have a pretty full plate at the moment, so I will hold off on starting the app for a little bit just in case someone else throws their hat in the ring so to speak, but if no one does, I’ll post back here when I start so that there isn’t double work being done on it.

Here’s that video I said I’d put together. Hopefully this helps… for rectilinear shapes anyway.

sketch42 thanks for taking the time to put the video together. I learned way more than just how to round corners. I need to go in and re-read the easel instructions. I was unaware of several commands you used. now I’m wondering what else did I miss .
thanks again, much appreciated!

@sketch42: after watching your screencast, I decided we needed to make it take less than 2.5 min to round the corners of a rectangle, so I added a corner radius option to Easel for rectangles:

Do I need to request access to thus feature? I don’t see it in easel, but would sure like to have it.

Rounded corners are only supported for rectangles. Maybe you had a different type of shape selected?

That could be. I don’t recall, but I do see it now, and I do have a rectangle chosen. Thanks for the reply.

I do not see “rectangles” only “squares”. I do not see the radius corners option, anyone have any ideas? 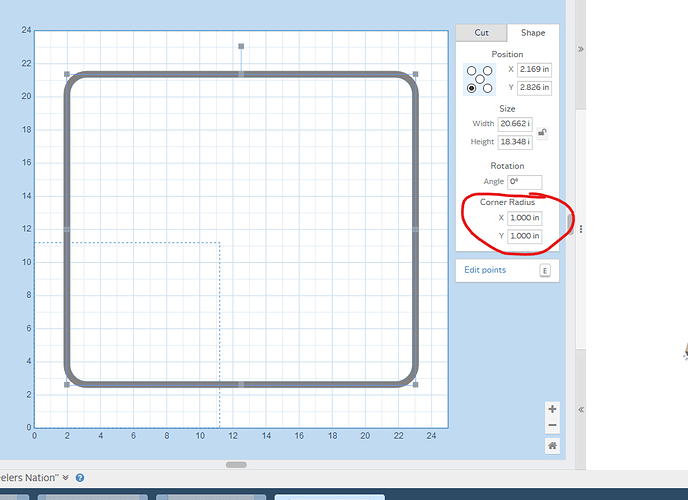 That portion of the window does not show up…