I am just wondering as it could possibly help quite a few people if it’s a viable solution…
I just stumbled upon get one of those rockler (or many other companies) router speed control boxes where u plug it into the wall and plug your router into it and it has a knob for speed control.
Would that be a viable solution for people with say a Bosch colt router?
I was using my colt but switched to makita variable speed and realized how much power etc I was waisting lol
Anybody who knows if this is a solution for those with single speed routers in their X carve, please chim in!!!

you mean this one? http://www.rockler.com/router-speed-control

These types of controls aren’t that great and generally don’t work with newer routers. They will only work with routers that have a universal motor, no internal speed control and no soft start. That said, they still won’t be that useful as there’ll be no way to figure out what the RPMs will be at a particular setting because the dial does not have any idea how the motor behaves under load, what its typical RPM is and there’s not real indication of if the knob adjusts linearly or logarithmically. It’s a full analog circuit, so the speed you set it to will change with temperature and contamination too.

it will probably only let the spindle speed go so low before it stalls out, that’s usually around 10k RPM.

AvE did a review/test of this type of control a little while back (small language warning): https://www.youtube.com/watch?v=n_uK2G4qFG4

In addition, routers are typically cooled by integrated fans, and if the speed gets too low, may overheat.

As Ryan has pointed out the Rockler is not the way to go. If you need speed control then look into the SuperPID:

Thanks for the info on this. Obviously not a viable option, but was worth a look though. (I’m sure I’m not the first, but searching the forum can b a pain when u don’t have much time.)
I looked into that super pid, and while it sure is nice, it costs far more than I paid for my makita variable speed router!!!
So while it seems a great product, the people who would b interested in the rockler switch would b the ones who don’t want to spend a bunch of money!
I probably didn’t state it, but was hoping the rockler switch would be a cheap solution to a non variable speed router.
That super pid sure is a nice piece electronics though! And if I needed it, that would be what I’d go for!!

FWIW, this was documented on the Shapeoko forum a while back: http://www.shapeoko.com/wiki/index.php/Spindle_Options#Spindle_Control

I actually use one on my machine, but set to 100% power — just use it as a conveniently placed on-off switch for the router.

Okay, so I have had a cheap Harbor freight speed controller, but i recently swapped over to the HD one on the page listed. Yes, it won’t work with soft-start or variable-speed routers. But I have a craftsman that I pulled all of the PCB stuff out of and hardwired to the power cord, and a porter cable 690 that I use on the controller every day. It is a nice piece of gear… 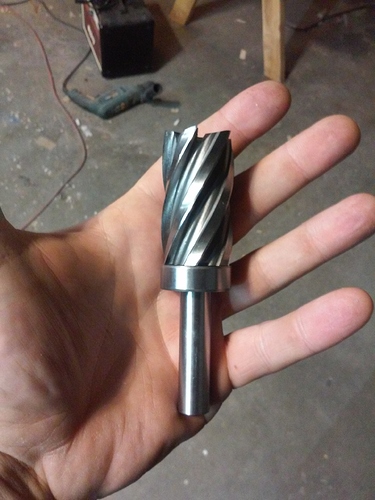 I use this big bastard in my router table with the Porter cable to trim guitar bodies down to template spec in one pass. The bit is probably 8oz, and has a max rpm of 12k. But I never even turn it that fast. I get it up to an rpm where the harmonics and inherent run-out of the router smooth out, and go to work. With the initial bite, the router slows down, but it holds a constant RPM after that.

I know diddly-squat about the PID, but I know it requires router surgery, right? So for a fraction of the price, this piece is pretty nice.