I’ve been using the Dewalt 611 since buying my X carve and it seems to have done a good job, the bearings are getting a little noisy so will be replaced in the new year. I’ve never really thought about it much but what are the other options? I know people have used other trim routers like the Mikita for example.

Looking on google there is a MASSIVE selection of CNC router spindles with high power outputs like 2.2kw. Should we be looking at other alternatives?

Thought this would be a good discussion.

following this discussion… I too have been starting to look into spindle options. Really thinking about VFD. Found one that goes from 0-24000 rpm. I won’t be changing my dewalt out until I start making money with my machine. Now that I have time and my shop almost setup… I’ll be doing more cuts and putting stuff out for sale. 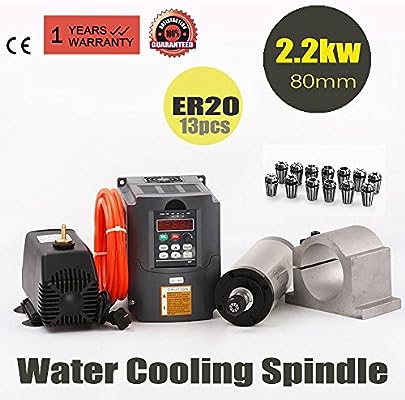 This is interesting.
I’ve had my machine since mid November and my DWP611 quit just this past Monday.
I still haven’t heard back from inventables, but after doing some research around the internet and forums, it may not be the best choice for the X Carve.
There are quite a few people that have experienced premature failure with these routers.
What is VFD?

wow that hasn’t lasted long. Mine has lasted over a year but saying that for a lot of the year it hasn’t been used.

While it may be tempting to upgrade to a 2.2kW VFD-spindle realize that such force require a very rigid setup in order to work/utilized properly. No point in running at 2,2kW if you can only use a fraction of this before vibration/bit deflection become very real.

For those who have VFD setups, what power range are you guys operating at?

I got mine last November as well. I have gone thru 5 of the 611s. You have to contact dewalt online. They all have 1 year warranty. Full replacement. I bought another one for backup. Going to upside now. Just don’t make em like they use to