I have had the 1000mm X-Carve for a few months now and I just recently hooked up my dust boot system.
Ever since I assembled the X-Carve, the z-axis has been clunky going up and down while close to the most raised height. It would be smooth, however, when the spindle was lowered.

Before the dust boot, I was able to z-probe and run my projects without the z-axis ever having to go up so high on the threaded rod. However, today I was doing a two staged carve, and when I put in the 60 degree v-bit for the final pass, I had to probe, then lift the bit high enough to get the dust boot on. Well when this happened, I had to go to the higher portion of the rod and it must’ve skipped. When it went down into the project, it went too deep and wrecked the design.

Attached are a couple of videos and pictures of the clunkiness, as well as the aftermath on the project. Can you help me troubleshoot?! 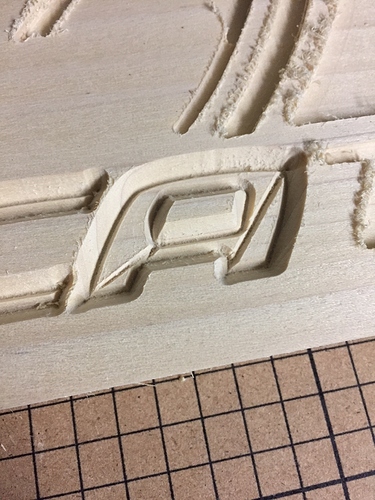 I have a better video that shows more of it, but it won’t upload. Probably because it’s 22 seconds long

Is it possible that router plastic housing is crashing on the Z moror plate? Looks real close and I think I remember others having this problem. 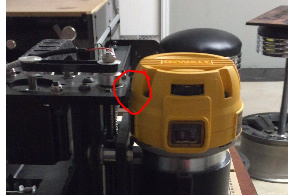 3.In those directions, there is no instruction to tighten screws on that black nut that is on the ACME threaded rod. Am I mistaken?

I will also make note that this may be damage from initial install. When assembling everything together, the Dewalt Spindle could not clear the plate that the threaded rod goes through. Apparently this is a known problem for some on the forum, so I shaved the plastic down on the spindle to make it clear.

It originally did, but I shaved the yellow housing down just enough to pass it.

Hmm. I don’t understand how to turn it. The only way I thought you could move the Z-Axis was through Easel, in the carve settings.

All teeth seem to be there.

After watching your videos I’m almost certain you have this issue, having had to work through this same issue myself.

The is definitely steps lost in the video, you may also try to loosen the screw block so it is only “just firm” instead of tightly screwed to the carriage. If it is overtightened it can marginally twist yet cause great increase in motion resistance.

Is it possible that router plastic housing is crashing on the Z moror plate? Looks real close and I think I remember others having this problem.

Get a Dremel out and grind down the router housing. It’s some pretty thick plastic but you can grind enough away to clear the z plates.