Safe Travel Height and End of Carve NOT to 0,0

It appears that changing the safe travel height only affects mid carve movements.
The travel height at the beginning and end of the carve appear to be hard coded at a very low point.

Can we get an “advanced setting” that allows us to define what the actual safe travel height is for the entire carving process. I like using Easel, but I’d also like to be able to use what I feel is a safe height to zoom across my workpiece. I worry every time the bit gets down to just above and then ZOOMS across to the first cut point. It could damage my expensive CNC, it could break my not too cheap bit that I don’t have a several of laying around, and could damage a work piece that might already have quite a bit of time invested in it.

Similar to this an “advanced setting” to return to G30 or G28 instead of always back to 0,0. This is for repetition as well as for setting up carves that might need to start away from 0,0 (I set G30 to where I want to start) and stay away from returning to 0,0 due to whatever reason I might have.

Need some help please! If I’m cutting 3/8" wood and end the cycle early via the X by the progress bar in Easel, the machine drops to Z0.25 and goes for the program origin, snapping the tool and/or jamming things up (I program with the wasteboard as zero for Z). How can I change this “safety height” when I cut a program short to actually be safe? Something like 2" would be nice. That’s what I set my safety height as but that isn’t what it uses when you stop short of finishing a program. Thanks …

I have set my safety height to 1" before and all it did was cause the bit to go up 1" between travels during the carve. As soon as the carve was over it was right back to skimming over the work back to 0,0.

It was an early thing I noticed: manual generated g-code example

So apparently as I assumed in that thread, the return to 0,0 is hard coded and doesn’t read the safety height variable at all.

I really don’t want to have to use a different g-code sender. As far as I am concerned Easel is “integral” to the X-carve.
It has got to be just a few lines of code that for whatever reason are not getting the safety height from the variable that can be changed by the user.

That move is not added to your generated toolpaths, it is a default Easel motion after completing your toolpaths.

My opinion on this: CAM software and gcode should handle machine’s motion. The controller UI should do only what the user tells it to do. The only time the machine should be automated is when it’s running the code that I told it to. If I break something, I want it to be my fault. I’m usually smarter than my tools.

I second this request. I’ve scarred at least 2 of my work hold down arms already. Either allow us to turn it off, or set the safe height.

Where are you setting the 1" safety height, in Easel or your cam software?

I was just playing with this changing the last G0 command to go to max y of the workpiece, but the preview still shows it going back to 0,0. Just my 2 cents, but moving the router to max x,y would be a nice thing to do at the end of a job.

It’s confounding to me that it drops from xy zero and then moves. Then does likewise at the end.

Completely opposite of what should happen, in my opinion.

Sounds like the development team needs to address this sooner rather than later.

I second this request. I’ve scarred at least 2 of my work hold down arms already. Either allow us to turn it off, or set the safe height.

Any update? I’m new to Easel and I ran into this issue on the first few runs of my machine. The pre-toolpath and post-toolpath jog need to be much higher, or customizable by the user.

Any update? This has been such a consistent issue with clamps pre-toolpath & post-toolpath jog that I am growing very frustrated with Easel.

Any update on this issue? Still damaging bits and hold downs.

I second that. I see zero benefits to the extremely low default start/stop travel that has damaged so many of my bits. I would love to hear why it’s optimal.

I’m not sure what the behavior was in Dec 2018 when this thread started. However, the return to 0,0 at the end of a carve should be at the safety height. The default is 0.15" but if you change it to something larger that should be respected.

Have you tried increasing the safety height? If so, do you have an example project where this isn’t working as expected?

I think the question is why isn’t the default more like .5? Or at least higher than the clamps sold with the machine? What’s the benefit of the starting/ending travel being so low?

I know I have changed mine at times but it seems project or even workpiece specific?

Easel currently only has one height that it will lift to when performing rapid movements over the work piece. It uses the same height at the beginning and end as it does during the carve itself. Because of this, a higher value would add more time to the carve as it will increase the amount of up/down travel. For this reason, 0.15" was chosen to balance safety with performance. If you have clamps positioned such that a tool path could cross through them, then you might want to increase the safety height value for that project if the clamps can’t be re-positioned out of the way.

In the future Easel might support multiple safety height settings or other strategies to make it easier to avoid clamps.

The big takeaway for you, Inventables, is that something should have been changed about this whole workflow by now.

Tired of hearing, “in the future” @JeffTalbot.
We your users have given ideas and how we do workflow for YEARS.
There have been few and far between updates to software beyond cosmetic stuff.

You’ve got a new PRO machine coming… time for some PRO and production level capabilities of the software that comes with the purchase of the machine.

P.S. Time for the carve? HA! How about fixing the “wandering salesman” order of operations. More time spent watching the gantry move all over the board with the bit up than down in work.

For imported g-code, Easel gives you the option as to whether or not you want to have the machine return to 0,0 when you start the carve. This change in the walk through was released in March of this year: 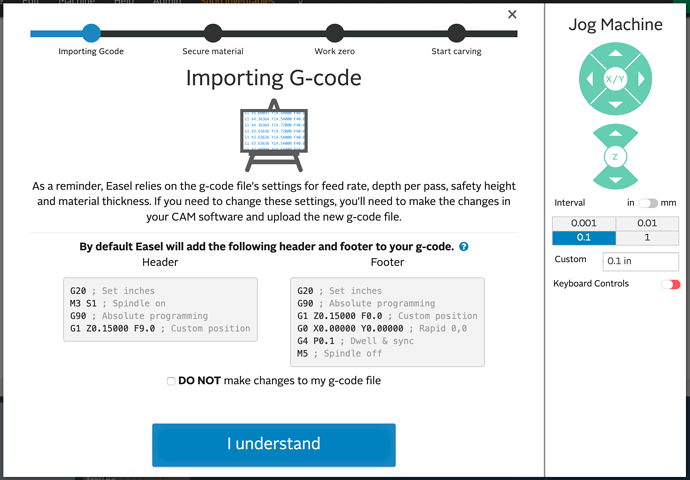 Great. Now that I know that, I have a workaround for the safe travel height because I will never have to have it go back to 0,0. I will simply create the g-code in Easel, export, modify, and re-import…

man if only I could just not have to override an Easel “feature”.