Does anyone know the specifics on the set screws for the pulleys? Specifically the X-Axis, 23-Nema motor. Apparently I lost mine, and it must have gotten vacuumed up, as it is no where to be found. Help would be greatly appreciated. I’d like to buy it here locally if possible so I can resume cutting tomorrow. (local is Houston Tx)

Right on the money! Thank you. I had some spare 3mm x 20mm screws laying around so i swapped one on the z-axis since it had clearance. worked like a charm.

If you find them local, let me know where. I’m also in Houston.

M3x4 are the set screws.
I swapped them for M3x8 hex bolts since the hex heads on the m3 sets are just horrendous and keep getting loose.

ACE does not have 3mm set screws. they did however have 3mm button head screws. I found I had a few of those lying around and ended up using one in the z-axis stepper as it has the proper clearance for the screw to stick out and be properly secure. Worked like a charm after doing this.

@AngusMcleod there’s plenty of space, you can go as far as 10mm i believe

Once fitted get yourself some nice patterned tape, I like black and white stripes. Cut a bit big enough to go around the pulley. Then affix. (I’m against using thread lock on such a small and soft set screw).

This way, if the set screws come loose, they will be retained and you won’t have to dig through your shop vac to find it. If you use a nice striped tape you can also see small movements in your pulleys more easily which is handy for fault finding/diagnosing missed steps/slipping belts.

Another tip. I found Thread-Locking 18-8 Stainless Steel Socket Head Cap Screw M3 Thread, 8mm Long screws at McMaster - they’ve got a nylon patch on the side of the screw to thread lock them. They do stick out a bit from the pulleys, but don’t actually hit anything. They worked very well for me.

Just wanted to comment that I ordered the screws that Steve mentioned and the only pulley that you can’t use them on is the pulley for the ACME drive rod. The screws stick out too far and hit the button head screws on the motor plate and it stops the rotation. I just used the set screws that came with the Xcarve and put on some blue loctite for that pulley.

Could you flip the pulley and run it that way so the set screws won’t interfere with anything.

You might be able to. The only concern that I see would be the clearance between the drive rod and motor pulley with the mounting screws of the top plate to the makerslide. It looks like the belt may rub on it.

I knew I had to do something else, and still can’t quite remember what it was, but it’s easy and it works just fine. I think it might have been flipping the pulley as mentioned - it doesn’t rub. I’ll try to remember to take a picture tonight.

I also have my motor plate flipped on accident so maybe that is part of my problem. That’s another issue though.

Here’s a picture of the top of my machine with the replaced screws. The clearance is very tight, but nothing bumps. On the top you can see the 3D printed 46mm hose clip I designed (shared on Thingiverse), the screws don’t touch it either. To mount that clip I replaced the 20mm Z motor bolts with 25mm ones and added a second set of 5mm nylocks, so the plastic doesn’t get any of the force to secure the motor. 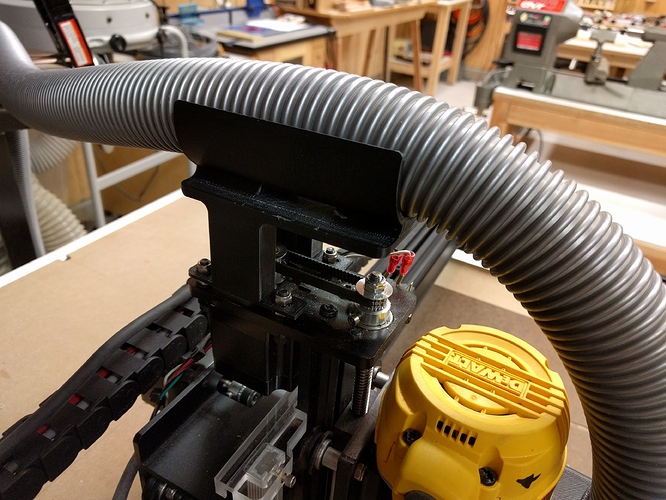 I just wanted to add for anyone who loses one of these set screws that if, like me, you’ve disassembled a laser printer or similar electronics device in the past and held onto some of the screws, you should have a pretty nice assortment of M3’s to choose from. I was about to order spare set screws (and I probably still will) because I lost one on my Z-axis. No doubt, to someone like me holding a vacuum, it just looked like a speck of dirt, lol. Luckily, I checked my small screw/bolt assortment–most of which resulted from disassembly of old electronic devices – and voilà, I’m hopefully back in business again (haven’t tried it yet)! BTW, the root problem for me is that my ACME rod is apparently bent because when I was initially “exercising” it along with the delrin nut using my drill, I noticed that it had about three tight spots (which I can’t even imagine how that could happen). Hopefully this won’t be a reocurring event for me.