I made these 5 shadowbox clocks as xmas presents for my parents and siblings. It was my first real project on the X-Carve other then upgrade parts for the machine. All the parts were cut in Easel from illustrations I did in adobe Illustrator and imported as SVGs. I was very happy with how the machine performed.

The only issue was when I tried using tabs, they tended to cause strange behavior, that would cause slipping in one axis, or have the bit drive across the middle of my part. So I ended up just cutting almost all the way through, and then used an xacto to complete the cut.

The thicker “frame” pieces are made from 1/2" birch ply which I cut with an 1/8" 2F spiral upcut bit. The thinner pieces are 5/32" birch ply, cut with a 1/16" 2F upcut bit. I stuck them down with spray adhesive to a waste piece of MDF that I level-cut first. 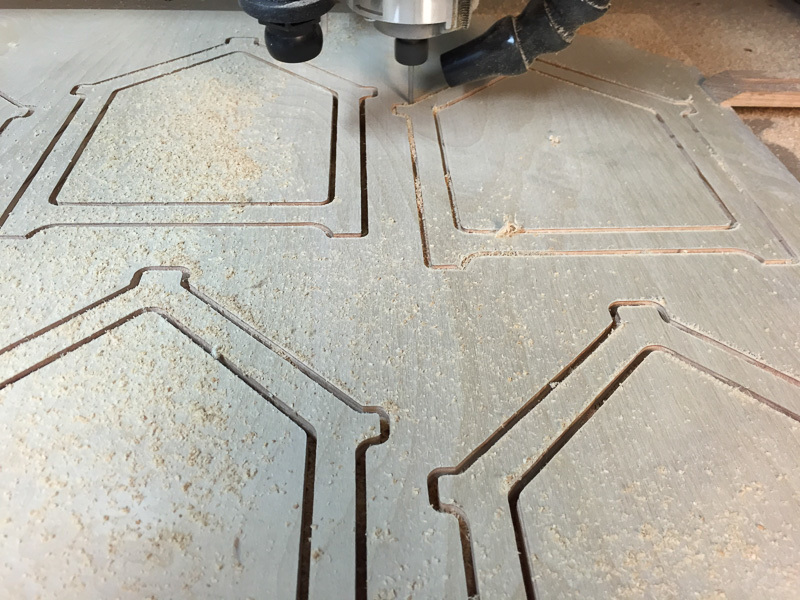 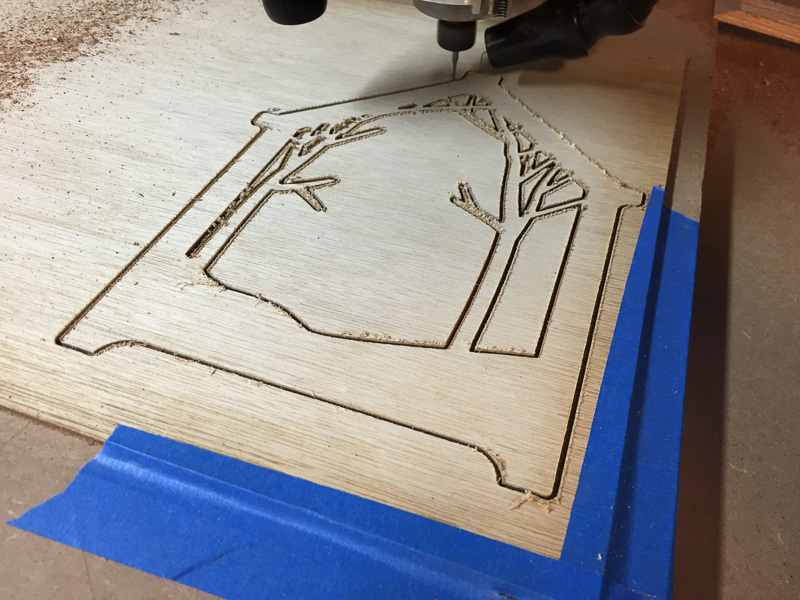 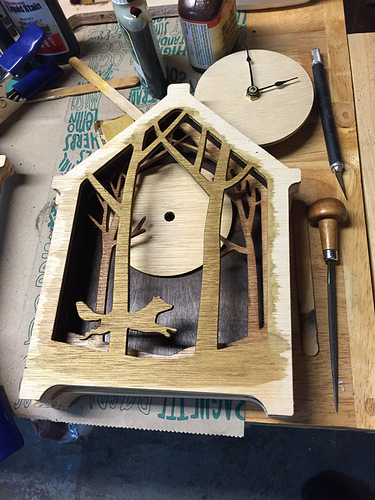 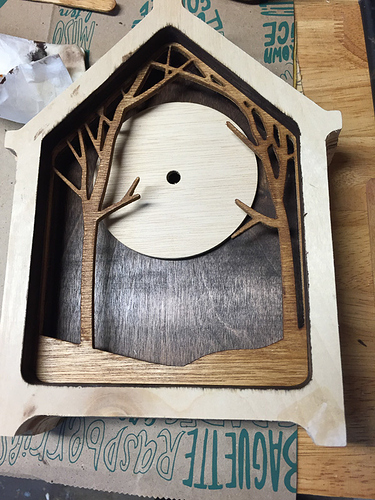 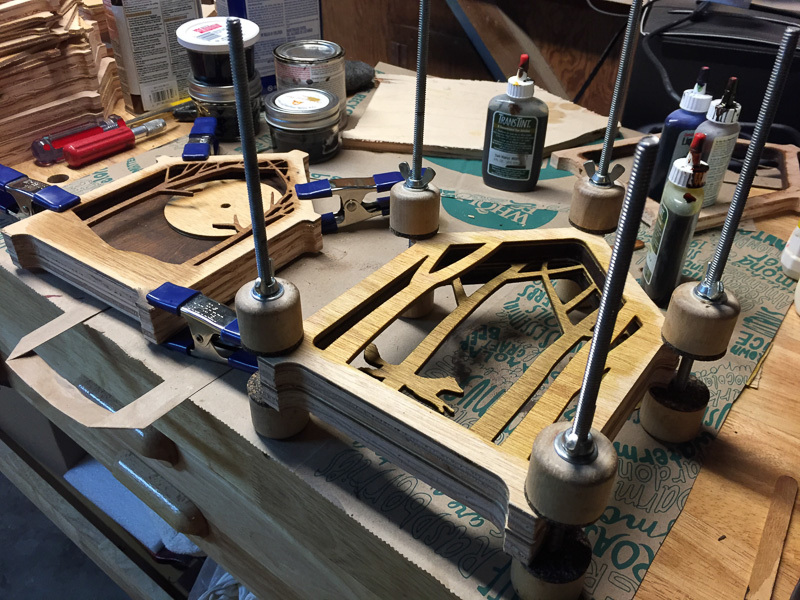 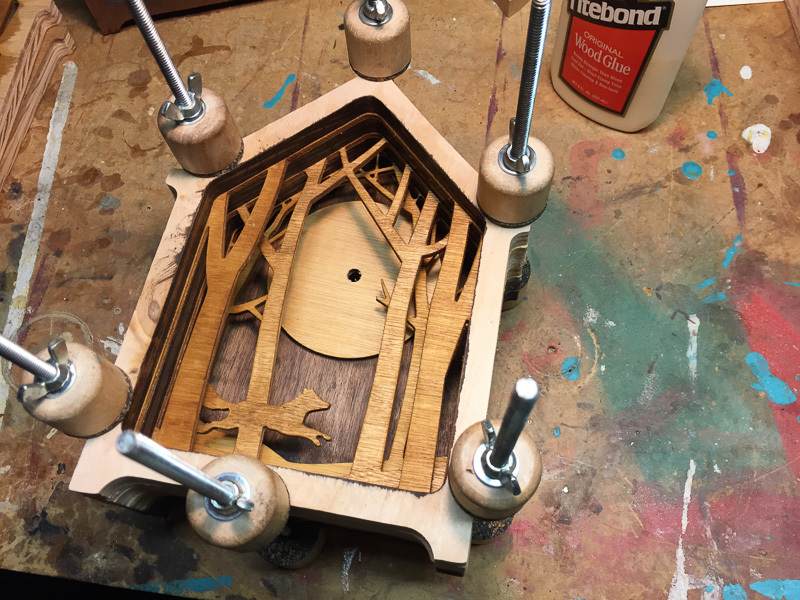 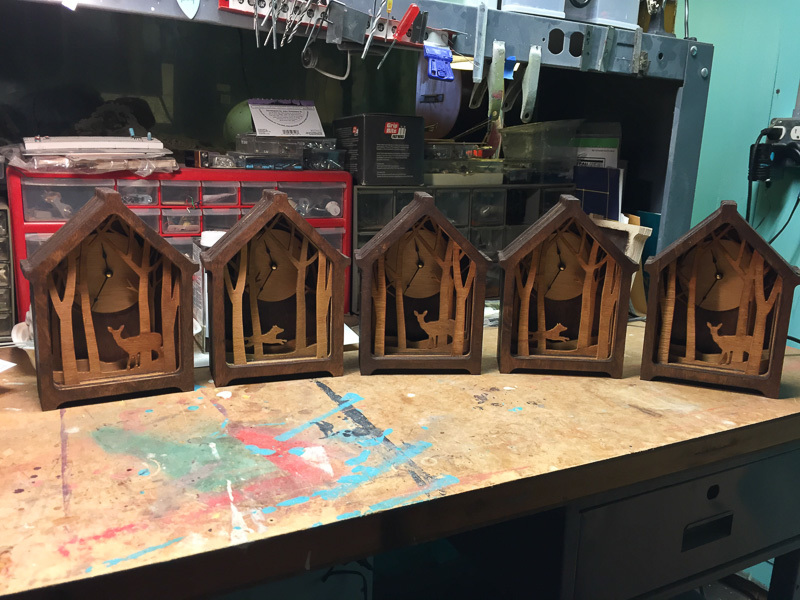 Great looking clocks, and great idea! Any chance you’ll turn this into a project for Inventables?

Are there lights inside?

No. I had thought of cutting the clockface, which is suppose to sort of be the moon, out of translucent white acrylic, and then lighting it from behind. But time and budget didn’t allow for it.

The moon! That’s genius. If you want to do 1 more Inventables would love to commission it. If you sell them we can buy it and if you don’t sell them we can pay for all the materials and give you a little bonus for the time to build it.

I’d love to have it on our shelf of projects.

If you don’t have time or want to move on to the next project no worries.

A cool add on would be something like a Adafruit trinket with one of the new NeoPixel RGBW LEDs and have it back light the shadowbox with the “time of day” lighting… That’s a few $ in parts and would be super cool!

Hey Zach, I’d be happy to build one for you guys. I’ll PM you about details.

@HenryFeldman I haven’t really dabbled with microcontroller boards before, but you got me thinking, seems like lots of possibilities with something like that! One reason I didn’t go with any lighting was I wasn’t sure the best way to power everything. I really didn’t want to put a plug on it, and didn’t think an AA battery would last more then a few days or so with some LEDs hooked up to it. Maybe with a controller board I could time it to come on for an hour in the evening or something?

@JohnBaum if you got a more sophisticated controller (like the new feather) it has a built in LiPoly battery interface, and charges via USB and has integral WiFi allowing (depending on battery size) a pretty long run. You could (if you really wanted to) add a photocell so it only backlights when the light is low, or only during certain hours. A single NeoPixel only draws 60mW at full bore (a LOT of light - especially since it now has a single white pixel so to just get light is less than the old making white via RGB part) you could run one of the larger LiPolys for a long time.

Hey @HenryFeldman, thanks for showing me another place to spend my money

Lots of cool stuff there. I guess I need to learn how to program arduinos and such.

I like the idea of having it be rechargeable. Do you think there is a way to also have the feather or other board control the clock, so you’d be recharging that as well? So, a digitally controlled analog clock?

A while ago I did a project with a $15 solar LED garden light kit I bought from Harbor Freight. It charges a AA battery during the day and lasts a few hours at night. It ought to work indoors pretty well.

Great project by the way, I’ve been meaning to do some shadowbox designs for a while now. This is a wonderful inspiration.

@Mike Great idea, I’m going to look into that. 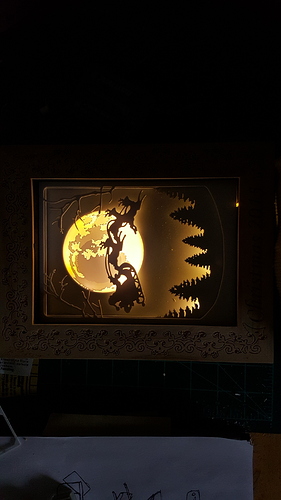 Ha! I had seen that when you first posted it, but forgot about it. Very nicely done!
I think your’s is mostly laser-cut isn’t it? When I was designing mine I sort of wished I had a laser so I could do something more delicate and detailed, but since I have a CNC router, decided to go a bit more chunky and folky.