Hey guys, I just launched a 9mm version of the stock belt clips on my website. These are in production now and are laser cut, formed, and powder coated grey. Price is $20 + $7.50 shipping anywhere in the US. Orders will ship the week of 5/21 at the latest. For international customers, shipping is $15.

Includes 6 powder coated belt clips. Drop in replacement for the stock clips, so no special hardware is required. 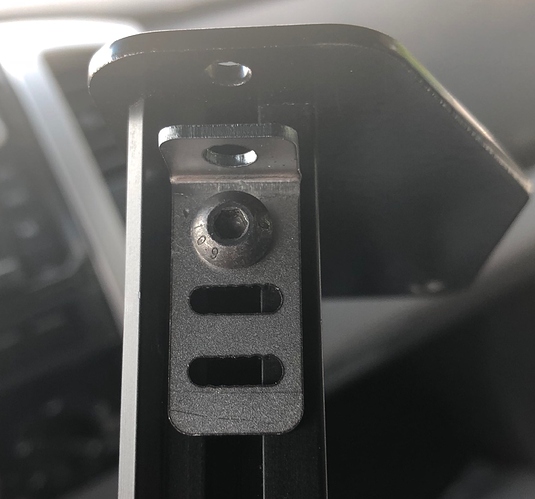 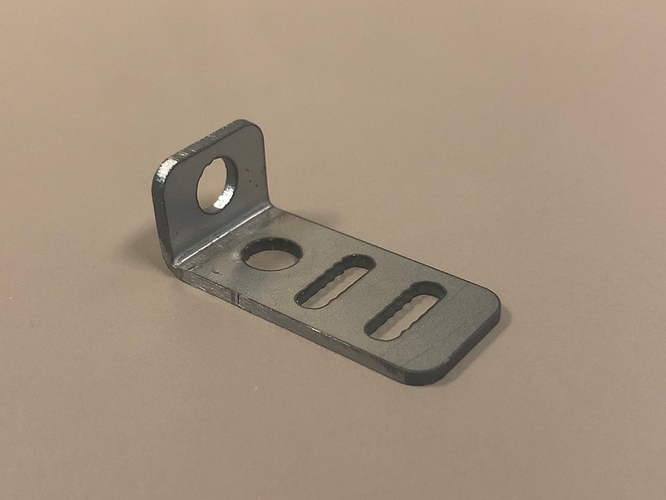 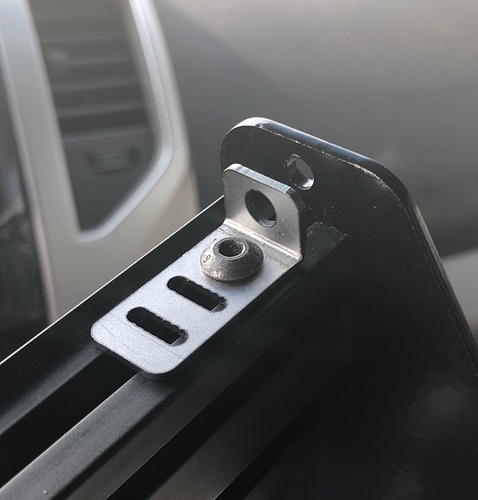 Come on man, I was on my way to pick up my sample when you posted at 9am this morning. It’s just a coincidence that we both launched at the same time. There’s nothing to copy from you - it’s just the stock belt clip made a little wider. 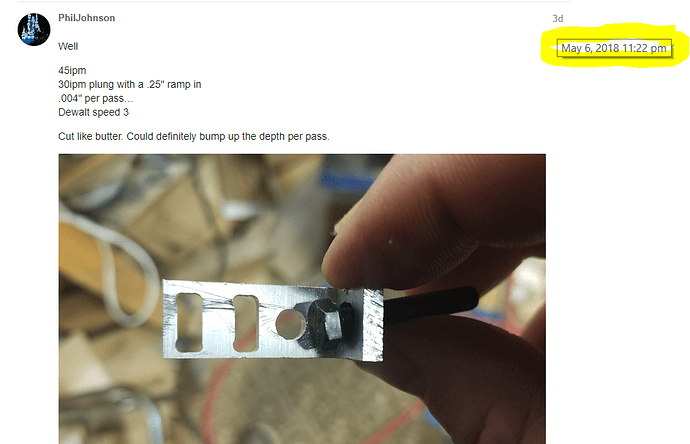 You posted a week ago about your printer issues, but even that was after my RFQ was already submitted.

Come on Phil. This is a basic function item. I’ve been 3D printing them in various widths for ages. You might was well say that you copied Inventables.

In his defense @PhilJohnson I had ordered his aluminum ones weeks ago because nobody else seemed to offer them and I don’t trust the 3d printed to hold up to the stress and did not like the fitment of them stacked on the stock clips and this is where he ended up trying to figure out a better way to do them. We were just discussing a couple days ago that we can’t believe nobody even offered a product like the stock clips yet. Guess great minds think alike and timing just happened to be poor. I know people have been looking for this solution for months including myself.

Love it because it will give back the extra inch of lost travel with my 3d printed ones but again brings in the question of how hard can I push the machine with plastic clips?

Competition is a good thing, it keeps prices lower than otherwise and it serves to keep quality high.

I couldn’t agree with you more!

Hey Bill - what’s the mechanism to adjust tension when using these zip tie clips? Is it just the zip tie that goes between the zip tie holder and the riser plates?

Sounds like an innovative budget solution. Good thinking. I know personally I like having more precise control over belt tension, but this is a great backup option.

I do notice that your limit switch is pretty far in on the rail, and the zip tie clips are fairly high. Do you lose a little travel with these clips?

sorry Phil, I disagree.
You publicly accused him. If it were the other way around there would be a war going on now. It’ only decent to acknowledge his timeline checks out and you were wrong to accuse him. If you don’t want people to stick their nose into something, discuss it in private, which would have been the better option.

I made metal 9mm clips back in ‘16. It’s on my blog. Who cares? No one is entitled to such an obvious part. It’s not anybodys proprietary design except maybe Inventables’.

Okay Phil I said what I had to say. Make of it what you will.

I get where Phil is coming from it’s not so much the product as it is the hey I am selling these followed by hey I am selling the same exaxt thing within a few hours. I don’t know if the similar timing and or wording was intentional but I would also be pissed if I offered a new product and immediately after someone else offered the same exact thing I had just finished building up the hype for. Intentional or not I think he has a right to be upset. 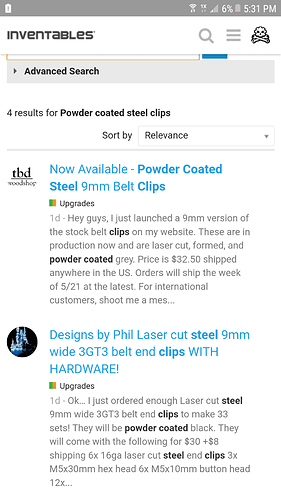 I agree 100% that Phil has the right to be upset with the timing. He chose to take that out on me, which is inappropriate.
It is unfortunate for both of us that we both launched a similar product on the same day. I was upset when I saw Phil’s post, because I didn’t know anyone else was planning on launching these. However, it isn’t reasonable to expect me to not launch my product just because someone else had the same thought. The only thing I was waiting on was the sample so that I could confirm fitment. I brought makerslide and end plates to work with me that day so that I could test fitment and post as soon the sample was ready. I chose not to post a product that I hadn’t personally verified fit properly.
I got the call that the sample was ready at 8:53 AM. When I got back from picking it up, Phil had already posted. I don’t lose my right to sell my product because all mighty Phil had the same plans.

As far as the titles go, who would call these anything other than “Steel 9mm Belt Clips”?

Phil certainly does not have the right to accuse me of copying him. This is the only thing I copied: 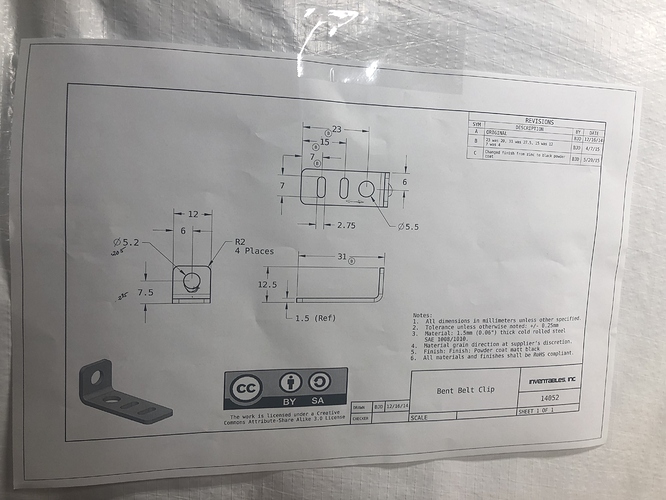 One thing I ran into when I made mine was V-wheel clearance due to the added width. Has this been checked?

edit: here’s my old ones:

They are offset as you can see so there is space for the V wheel to ride alongside. Doesn’t look like your design (and Phil’s for that matter) took that into account. Not a huge deal but it may hurt the wheels over time and it shaves off some travel.

You’re absolutely right, but I wanted to keep the belt in the center (so that the tension bolt was pulling straight in line with the belt instead of torquing the clip sideways) and the stock clips are already 0.25mm (0.0101") from the V wheels, so any increase in width will cause potential interference. I could shift the tensioning hole over, but that would require custom end plates and it wouldn’t be a drop in part anymore

My solution is to grind the v-wheels down just a hair so that they clear the clip. 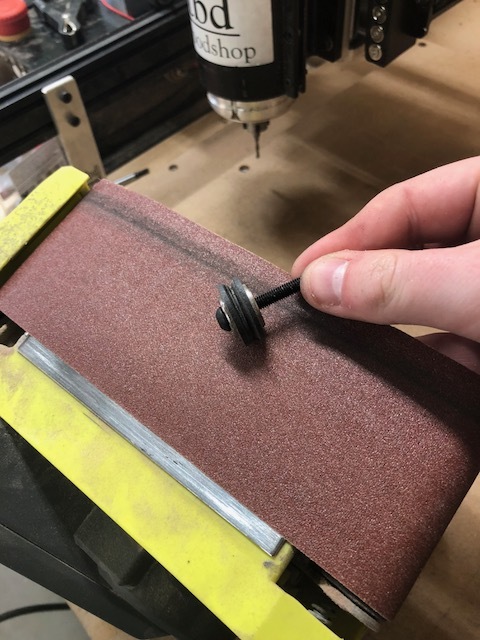 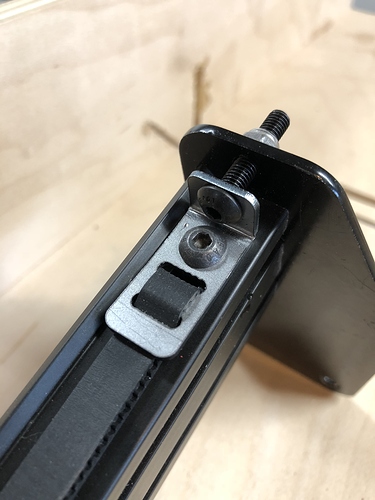