I have the exact same problem as on the video. Same axis, same wheel location. I feel like my problems showed up soon after I switched to the dewalt router. My cuts have been awful. Bit has been getting pushed or pulled slightly while cutting. A straight line ends up kind of wobbly looking. Going to take apart wheels right now and go shop for washers. I badly need this to work.

Dan
When you get some washers you may want to set up a little test stand. Drill a 5mm hole in a piece of metal and clamp it in a vice so you can get to both sides. Assemble a wheel with new washers and bolt it to the plate like it would be on the machine then see if it turns smoothly and if there is no axial movement. If all is well put that wheel back on the machine and test the next. etc

@BadWolf - where did you find those washers? Anywhere online?

pic via alandavis, was his idea and should get any credit 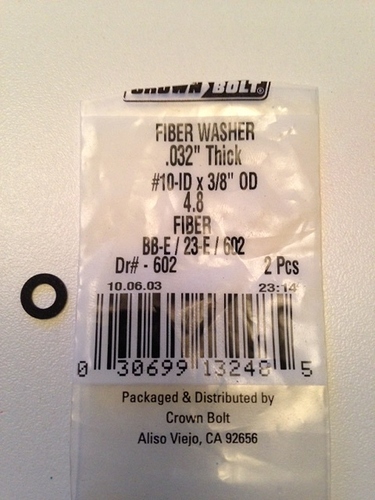 New washers did the trick. Cutting smooth. Thanks for the advise.

Same here - thank you @DavidSohlstrom. I got the last three two packs from my Home Depot! It makes a huge difference. I meant @AlanDavis! Sorry… too lazy to scroll to the top.

I just got my x-carve today and I was planning to perform this modification immediately to save myself some hassle later. So far, I’ve tried a half dozen wheels and the bearings seem to be seated much more tightly than described above.

Should I expect the bearings to come out easily by moving the bolt back and forth? Mine definitely don’t do that, so I’m wondering if there has been some change in that part and I got a good batch of wheels or if I’m just doing something wrong.

You won’t notice until your spindle is mounted. It only really matters on the spindle carriage v-wheels. Assemble, jiggle, replace washers.

If you can punch a 5mm hole and cut the OD to 10mm then there is no reason at all not to make your own spacers for the v wheels.

Ya, I’m too lazy to do that, Home depot much closer.

Guys, there is a reason behind using fiber washer. If you can find same thickness fiber of course you can do it. Out side Diameter is not important. I don’t want to go over pressure and flex statics here. I tried many different way to do this, all failed after first job. Trust me on that. I’ll give you specs one more time, in case you need it. 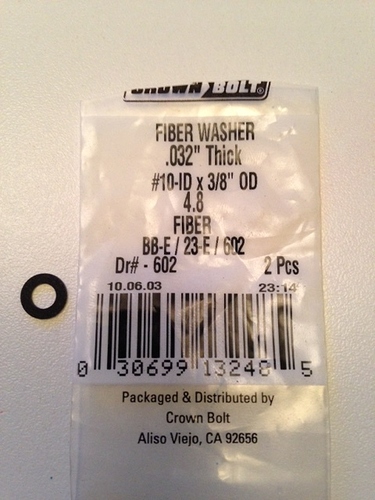 Thanks for your advice, Alan. I picked those washers up this evening, but I’m having a hard time getting the bearings out of my v-wheels in order to replace the washer. I think you said they should pop out easily, but unless I’m doing something horribly wrong mine seem to be pressed much more tightly into the wheels.

I’ve tried both a small screwdriver as well as using the bolt to get leverage to pop the bearing out, but they seem to be in there pretty good. Any ideas what I might be doing wrong?

Unfortunately new shipped V-Wheels seems little tight. Some other friend found easy way to take it out by installing first (It doesn’t have to be precise) push it up and down until you hear pop. They come loose. They’re not pressed, not glued. I think plastic shrink a little.

Cartoon maybe. The hard one. You probably can find any art/craft store.

I put the bolt in one bearing and angled it back and forth violently, hoping I wasn’t damaging the bearing. It was pretty violent and my bearings survived. I also struggled getting the bearing off of the bolt past the dried locktite. I used my dremel with a brush wheel to get the gunk off the bolt so the bearing could pass through.

I use blue locktite everywhere on my machine. I love the stuff. You can still remove everything but it holds otherwise. If I spend an hour adjusting V-wheels I want everything to STAY.

if you can get the washer to slip down where the hole doesnt line up you can then just stick the bolt in and push against the washer and the bearing on the other side will pop out.