Alright not curing cancer here, but wanted a sign to hang over/behind my x-carve. Now to be honest this isn’t pure x-carve, I laser cut the letters out of 1/8" MDF (mostly because it’s way faster). The gear is just out of the spur gear generator in OnShape CAD, which I exported as a DXF (I did make it a keyed shaft just for realism). The paint is Behr Marquee for both, which I applied with a roller (after the pic I went back with a small brush to get those holes). The gear is 1/2" MDF from Home Depot. 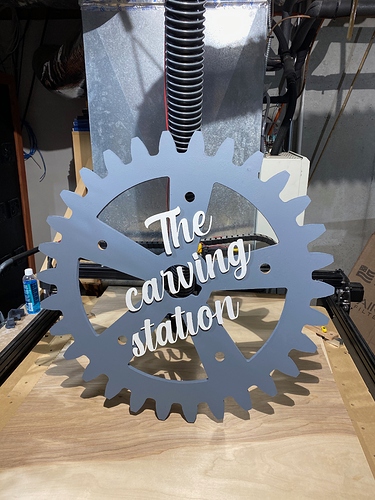 Very nice what laser are you using?

A lot of options out there not sure if I want to get something I can cut with or just engrave. I have looked at the GlowForge seems nice, the foot print concerns me though. Trying to decide if I should go with the Jtech 7w or something more substantial.

After getting a 1000x1000 x-carve, footprint is a different perspective. And after getting a Tormach weight/size also. However the huge advantage of a GlowForge is both the software and that everything is included (cooling, exhaust) so if you bought something else you still need those. Also I would never as a doctor have an Unenclosed laser (I do have safety goggles but even so). I have made so much stuff from medical instruments, lab experiments, signs (obviously). There are much faster lasers out there, but they are larger and more expensive, I had originally planned on getting a Chinese blue/white laser or a red/black one (40 or 60w). It you have to add a bunch of things to make it work, and all the scary stories of lifted grounds, scared me (the GlowForge is UL listed). The forums for GlowForge are even more helpful than the inventables ones (and I love this forum)

And at first I thought proofgrade material was a money-making crock, but it is really nice (you can use any brand, I use inventables all the time) it you don’t get the same quality of masking or plywood core (no fillers with glue). There are a lot of myths about the GlowForge (it can’t do absolute positioning - it does, I do it all the time). Once you’ve gone auto-focus and optical alignment it is hard to go back to a z-probed laser. I even take mine to the hospital where I teach a course on medical making (just hang the exhaust out the window). Glowforge sponsored me for a booth back in 2018 at MFNY and had the GlowForge in the booth making stuff, and we won 3 editors’ choice awards. Booth was mobbed. That poor machine survived 3 days in 90+ weather laser in fall day. It’s not as hackable as the x-carve but they aren’t opposed to small mods. The best comparison is the x-carve is a home-built gaming PC while the GlowForge is a MacBook Pro.

Trying to decide if I should go with the Jtech 7w or something more substantial.

GlowForge Basic (I was one of the original pre-order backers)

I convinced the school I teach at to do this. They made me cancel after it was delayed beyond the fiscal year.

Thanks! your comments are what my concerns are on getting the Chinese ones, I have been watching the videos on the Makebox and the Glowfordge. I have been casually looking, what appears to be the ease of use with the Glowforde has me interested but the choices and prices have me confused/questioning which to buy. I am afraid I will be wishing I would have gone more than basic if I go that route as I really am not sure what I may do with it other than it being an expensive toy / addition to the shop.The Jtech seems to be nice for the connection between the X carve but from what I have seen it seems to be a slow process with the 7w.

I have no experience with lasers but I am intrigued by what can be done engraving everything from cups to leather and everything in between. I am concerned with learning and using some of the more complicated software. Easel for me has been pretty easy and I find it very user friendly and it appears Lightburn is the same way. The Glowforde seems like a very nice package.

I would have gone more than basic

So to be honest capability wise there is almost nothing the pro can do the basic can’t (the only real functional difference is the passthrough slot (Only a few times in my life have I ever wanted it, but it’s limited to really thin stuff) but otherwise the ruggedness and extra cooling really only matters if you are a production shop. If your glowforge is indoors and not in extreme heat I have never run into a problem (at MFNY I did but to be honest if Baliey from marketing at Glowforge hadn’t come by with popsicles and water bottles when she did my thermal protection would have locked out as well! I does a beautiful job engraving (much more engraved than a tiny solid state laser bolted onto your spindle. I have done inlays with the laser and they work great. I’ve done things that now that I have my x-carve working would be good projects for the x-carve (carving oak trail signs for the riding trails at the barn - the dark is just the laser burn while the colors are just liquid acrylic paint poured in. Then urethane over the whole thing) 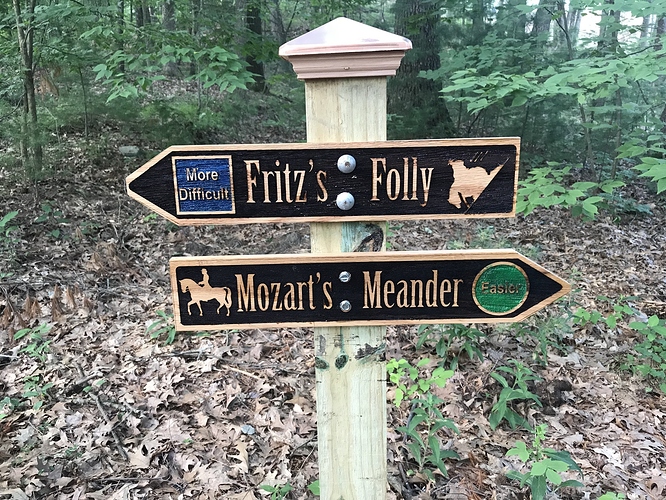 Hi Steve,
I bought the J-Tech 7 watt and have no issues with it.
So far it has done everything that I wanted. (engraving)
I bought it mainly as an added tool so I could get finer detail on my wood work.
However lately I’ve been engraving ceramic coasters also.
As for software, take a look at Lightburn. 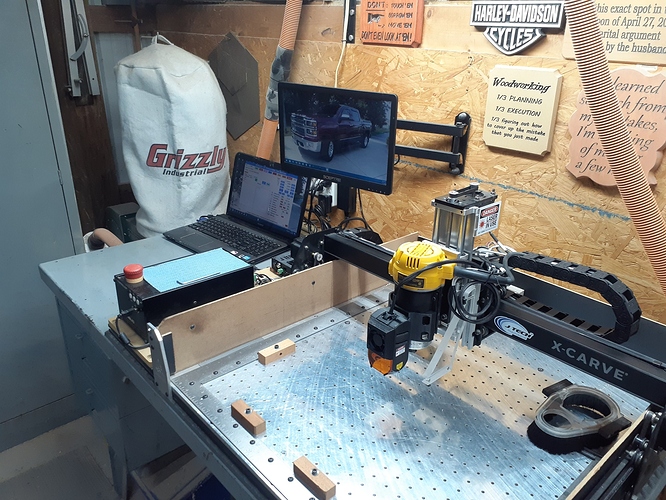 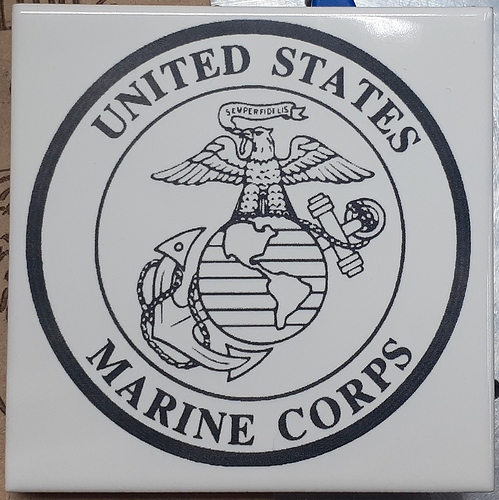 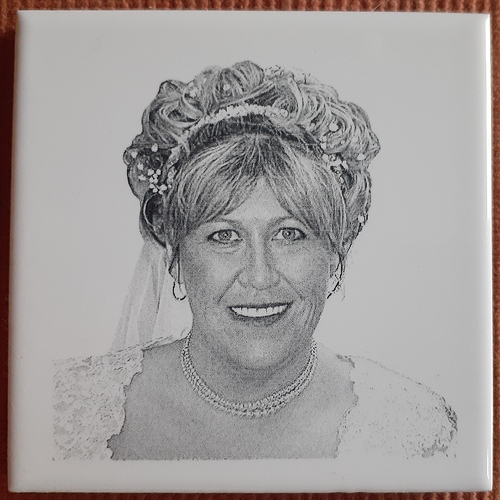 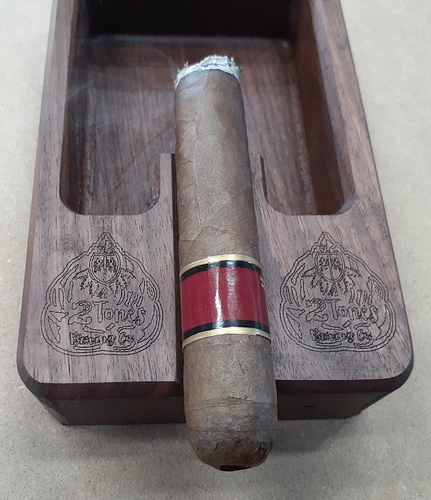 As for software, take a look at Lightburn

That’s a big difference with the Glowforge is you don’t need an external “CAM” package like Easel or Lightburn. They have their own web-based UI (we all call it the GFUI since they never named it). Sure you still need something to make the images (illustrator/Inkscape/photoshope/GIMP whatever) I generally work off CAD since most of my makes are mechanical in nature and then export into cut files for the Glowforge. If your use-case is marking wood like @JanVanderlinden does above than yeah, a small solid state laser works great (not as safe as an enclosed vented laser, but effective and obviously cheaper). From a safety standpoint the unenclosed laser is a bit less awesome. And without an air-assist blast like a regular laser cutter has your risk of fire is much greater (engraving probably less so but not zero - I’ve proved that). If there are any kids around I would not get an unenclosed laser (I’ve had kids as young as 3 play on the glowforge with me) Also fume management is important (most of the stuff that comes off a laser is nasty stuff. Even when cutting just wood (this isn’t burning it is more decomposition, so you get CO, CO2 and all sorts of nasty organic compounds) with a full 40W laser you need either external exhaust or real laser-grade filtration (I have both the filter for teaching)

One of the reasons I chose the J-Tech is that it has an enclosed beam with a safety window in the front.
The focal point is 1/8 inch below the body. 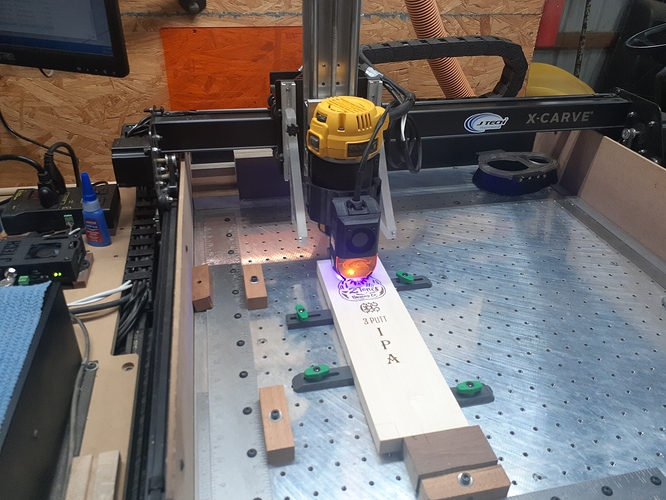 Certainly safer than fully open laser but not the same as everything inside a box (and certainly for airflow to remove toxins). I can’t imagine doing leather on a laser like this considering how bad the stench is on a fully enclosed system with powerful exhaust.

intrigued by what can be done engraving everything 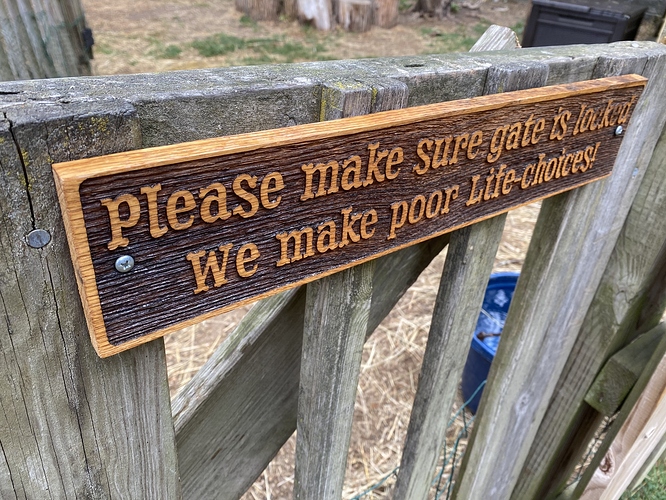 The engrave depth is about 1/8” (single pass)

Thanks for all the info, I need to make up my mind on my path forward, in reality at this point I don’t feel I need a huge footprint for the type of stuff I think would laser.

I really like the results you got on this sign. What type of medical instruments are you making? I have been watching videos, everything from tiles to shot glasses on the Glowforge.

What type of medical instruments are you making?

I end up making a lot of things to hold things on the OR table for the surgeons I work with. I do most of the “real” surgical instruments out of either 3D printed nylon (FDA certified) or 316L. In general I am of course making prototypes. One device I made which went to a clinical trial was designed to hold. Special kind of endotracheal tube during thoracic surgery… I’ve also done a bunch of lab devices for experiments (like a custom vacuum chamber out of 3/8” acrylic for our thoracic surgeons. We do a lot of 3D printed surgical guides for the orthopedic department too. And soon hope to have a workflow to mill custom plates to repair fractures (316L); I’ve just been scared of the 316L milling since mistakes with 6061 or 7075 just generally result in a trashed piece or if it is a small endmill a broken tool. But with 316L you can break big things.

I need a huge footprint for the type of stuff I think would laser.

The bigger challenge with the GlowForge is not the total footprint, but rather the odd size. Almost all supplies in the US at least come in foot increments, but the bed is 20” wide. So if you don’t have a table saw you will be unhappy. The proofgrade materials are of course 12x20 so they fit into the bed with a nice snick (surprisingly tight tolerances). I think part of the challenge is they were up against the shipping box size maximums so couldn’t go 4” more.

The design of the machine is very high end, and if it didn’t sound like a VF-22 Osprey on takeoff you would have it front and center in your office. (It’s very Apple-like). However that design comes with some absurdity that can be annoying. The thing most of us have been annoyed about over the years is the totally absurd fan guard. So inside the exhaust port is a hex-grating. I’m not sure who that is there to protect. Sure the machine can be used by school children but that fan is inside the duct to the outside. All it does is make cleaning the fan a pain. When your warranty runs out you can cut it out with a a dremel. A couple other specific things: you need a specific brand of Zeiss lens wipes (some special compound) otherwise you will destroy the laser lenses (amazon sells a box of 200, not crazy expensive, which is good since you clean laser lenses a lot). Note it is cloud connected (the easel equivalent is on google cloud) and that’s not optional. Never been a problem for me and allows you to control multiple Glowforges from anywhere on earth (someone has to be physically present to press the go button); this is handy as one of the university labs I teach at is about 30mi away, and when one of the docs there has a question, I can jump on from anywhere and see, program and operate the laser. But it does feel somewhat silly when you are 3’ away on the same desk. There is a scan and trace feature which is really useful with kids, but other than some friend’s kids I’ve never used it, because my first instinct is jump into CAD.

So inside the exhaust port is a hex-grating. I’m not sure who that is there to protect.

Maybe its actual purpose is to deter would be intruders that might climb up through a hastily installed outdoor vent that has no mesh covering the outside opening … ? Just a thought …