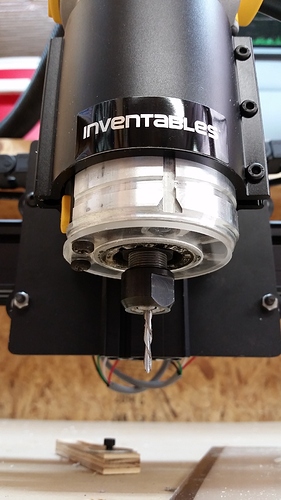 Made this simple dust cap out of thin plastic.
Just measured the inner ring on the DeWalt 611 and the outside.
Cut out in easel.
Drilled the small screw holes on a drill press.

Being that it is clear so i can not tell but is that closing off the holes?

congratulations, you found the way to cook your Dewalt. Those holes for air circulation to cool down your router.

Just what I was thinking…

Thanksgiving is coming up!

Ahhh yes Thanksgiving. now i get it this is how to cook a turkey on a dewalt. But no seriously if that is blocking the airflow off the dewalt has no way to cool off. If i remember correctly the dewalt has thermal protection that will shut it off and that could cause damage to the xcarve components, bit breakage, and damage to the project. The same could happen if the motor just burns up. worst case it could cause a fire. All jokes aside we are just trying to help. so let us know if their is something we are missing is this photo.

For a similar idea, but one that still allows airflow, look up what people have done with diverters for their 611’s. Some also like the whole dust shoe, I’m still probably going go this direction soon.

I would remove this right away. Not gonna end well.

Over a year later and 300+ HRS still rockin the plastic on the DeWalt.

You never did explain your reason for installing it.

I will say, Thank you! You just showed me what bit I should be using for Plexi. …not the straight flute.

Good to hear that, you want to hear something if makes sense; That air blow also cleans dust out of cutting path. I wouldn’t block that helpful air for any reason. Especially if you have good dust shoe, that air kicks all dusts into suction.