I’ve seen lots of good looking benches, but not many sizes or heights for them. I’m thinking I’m going to build a basic torsion box type bench for my 1000mm x-carve. What’s a good size? I want enough room for the machine and somewhere to put my computer and other things I may need. 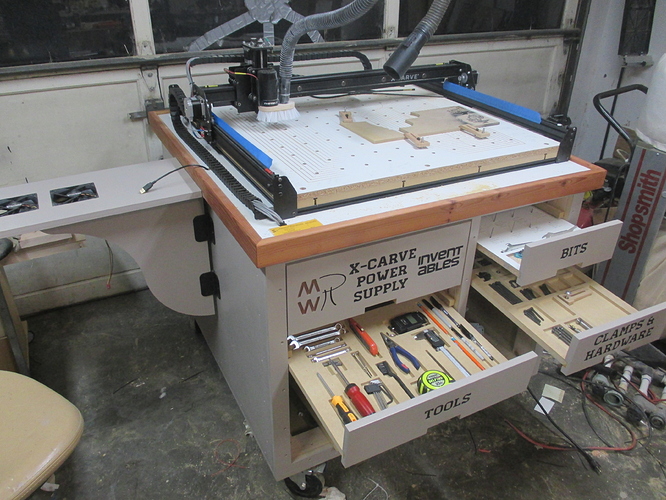 The inside of the cart is divided in half. I plan to store materials and such in the front, and will divide the back half up as necessary to store a vacuum, computer, and anything else that I won’t be touching very often. If I do put a computer back there, I would probably find a way to attach a monitor, keyboard, and mouse to the laptop wing.

I currently have my partially built X-Carve on a 1200x1200 sheet of MDF (table is a bit too small) and that seem to be a perfect size for a bench top. Any bigger and I’ll tend to clutter up the surface with, bits, tools etc.
A simple stand with (probably) drawers to hold miscellaneous tools, bits etc. Undecided as to how/where the electronics (Gecko based) will mount but as they’ll be in a 300x300x90 metal box, a small shelf should do. The computer may eventually get a shelf but until then, it can sit on the floor
Plan at this stage is for a torsion box top but that may end up being a bit ‘drummy’.
First job though to finish the X-Carve build…

I’m thinking the other way with my x-carve. I got it a few days ago, but haven’t gotten around to the bench yet. I’m trying to plan and build the bench so I’ll have a place to assemble the x-carve, and be able to use it when I get it together.

I don’t think I’ll ever be done with the bench. I’m going to run power all around it once after I place my next Amazon order, and will use the X-Carve to make the outlet plates. Should be fun.

I was a month waiting on the x-carve but never had any time to build a bench. Now the x-carve is here and I’m scrambling to try to get the bench done to get it out together. I wasn’t going to do anything too elaborate, but the talk of needing a torsion box made me nervous. I’m Concerned that if I don’t get good results, I’ll wonder if it’s due to the benches inaccuracy.

I didn’t do a torsion box, but I over-engineered the heck out of it. The 3/4" MDF walls are glued and screwed to the extensive 2x4 framework, and the top is a single sheet of 3/4" MDF with a second layer of 3/4" melamine glued and screwed to it. There are 5 casters, and I’m confident the cart is solid because as I move it around the garage, there are areas where it will wobble because a caster isn’t touching a low spot in the concrete. The build video is at https://youtu.be/n9qI6K7Spj8, and I’m working on a video detailing some of the modifications, like the drawers and the electrical system I’m installing.

It may not be accurate enough to give me .0001" precision, but the machine itself is only supposed to be capable of .003". The bigger sources of error I foresee are the weakness in the X and Y axes, which can be modified, and unevenness in the wasteboard, which can be fixed by leveling it at intervals.