This was a fun weekend experiment, and a fairly Rube Goldberg way of designing the skateboard: I used Google Tilt Brush on my Vive to sketch out the board in VR (allowing me to experiment with many life-sized designs quickly), which I exported & brought into Fusion360 for CAD tracing, then CAM output. I knew that the 1/2" HDPE sheet wouldn’t support the weight of an adult, but I figured I may as well test my cut settings for this material anyway

Whole cut took less than an hour out of a 12x30" sheet. Used a 1/8" 1-flute upcut endmill, DeWalt on 1, 120"/min did just fine. I had started at 60"/min, but got some melting around the cut, the more I sped it up the better it got. It looks rougher than it really is, the endmill makes interesting patterns in the plastic that reflect in the light.
I may try a 3/4" thick sheet next, see if that will hold an adult’s weight, but not weigh too much itself. 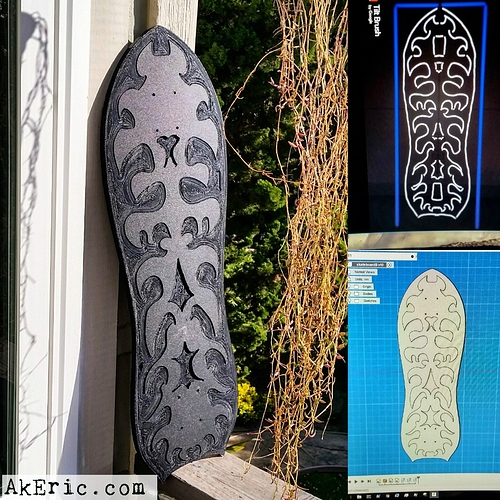 It is great attempt.
1 Hour… That tells what’s wrong with those pockets.
I would rather to use large area clean with 1/4" bit, then you can do second stage with 1/8" bit.
Also check the step-over rate on your tool database. the rule is 1/3rd of the bit size for better pocket surface.
Don’t rush it. Go several passes with shallower DOC. Job like this could take over 3 Hours. You’ll see the difference.
What I do if this one is my project is;
(I have Aspire and Vcarve pro) I generate Vcarve tool-path with 90 degree Vbit and give .05" flat depth, use 1/4" bit for large area cleaning on first stage.
That way you have nice 45 degree clean edges on those motifs.
Just my idea, if it make sense.

Looks pretty cool. I think the tool paths make it look cool. you could probably laminate it to plywood to get the strength you need.

Thanks for the feedback @AlanDavis : First time I’ve used this material so I’ll take all the help I can get

While there is no doubt the pockets could be better, I intentionally caught the reflection in the sun (which makes them look ‘worse’), since that black is so hard to shoot otherwise.

I completely agree though, normally I’d use a 1/4" but for the rough. Issue is, I don’t have any 1-flute bits of that size, so I just used what I had (1/8"). Just fyi, my stepover was .5 bit width. I had planned to use my v-bit as well, but the next issue is, that my v-bit is on a .5" shaft, while my 1/8" bit is on a 1/8" shaft, and the chucks really don’t like to come loose without a bunch of tugging, and I was afraid I’d loose registration during that process.

But again, appreciate your thoughts, I’ll reference them next time I do a cut like this

Verify the maximum weight capacity and width of the board to guarantee that it is safe and stable for you.
Be sure that even while you’re not using it, it is still light enough for you to bring it around.

Did you finish it? Can I see the results? Really looking forward to it

No, I just stopped there. I don’t skate, my kid does, and he has so many decks that he doesn’t even use so the project went by the wayside. Was a fun learning experience though.