Slicing a large 3D file in to small Pieces

Hello first post I hope its in the right section. I plan on buying the new X-carve but i have a question about if a certain process is possible. On my current machine if i have a 3D project that is too large for the machine to handle I can slice the project into pieces and then assemble it after. Im gonna attach two images to make more sense of what I’m trying to say. 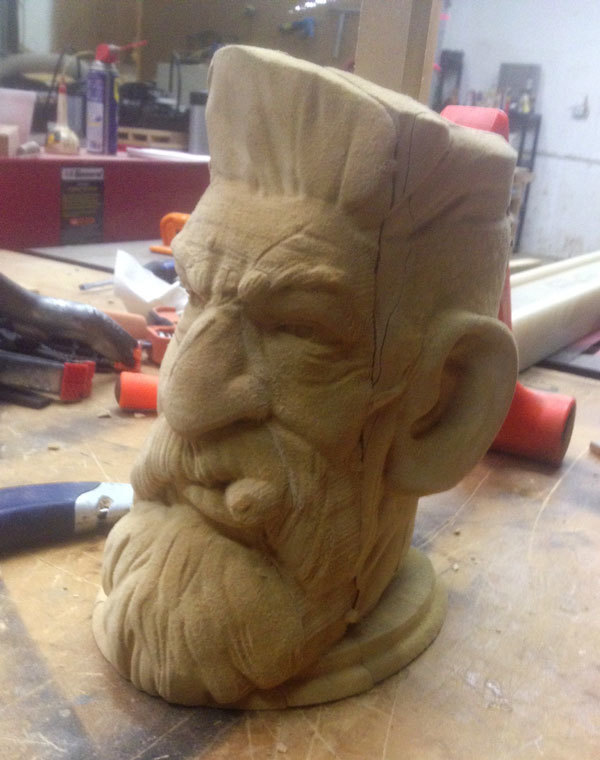 So what I’m wondering is if this is possible on the x-carve?
Thanks

What you are asking is more of a software feature instead of an X-Carve capability. Vectric’s Aspire program has this ability built in, I am not sure about Fusion360 or some of the other CAM programs.

So the quick answer is yes, the X-Carve can do a project like this with no issue, you will need to use software that can generate the toolpaths for you.

Splitting isn’t the issue with the model you posted, the real issue is that you’ve got overhangs. Keep in mind that the bit on a CNC always comes from straight above - you can’t carve away material out from under another area. Look at the ear and nose in your model.

VCarve also can do this, break up a larger 3d model into “Slices” to match your material thickness. You can download a free demo o see how it works

I’ve done this on vcarve.

Meshcam also has that functionality.

You can run Meshcam with full features if you download it for the trial period and see if it works for you.

Thank you for all the answers. Aspire and vcarve pro seem to be too expensive for now. So out of meshcam and vcarve desktop which would you recommend? I will making all my 3D files in solid works because that is the program I am most familiar with and then importing into one of the above programs.
Thanks for the replys.

I have never used Vcarve, so can’t give you an opinion on that one.
I dished out the 250 for meshcam and have been very pleased with it.
Specially on complex 3D surfaces.

I just tried slicing a 3D body that I had imported (.STL) and breaks it up onto multiple STL files.
Then you can import each individual slice and process it and generate gcode.

Seems straight forward. I would definitively recommend playing around with the trial version. It should allow you to try this functionality. 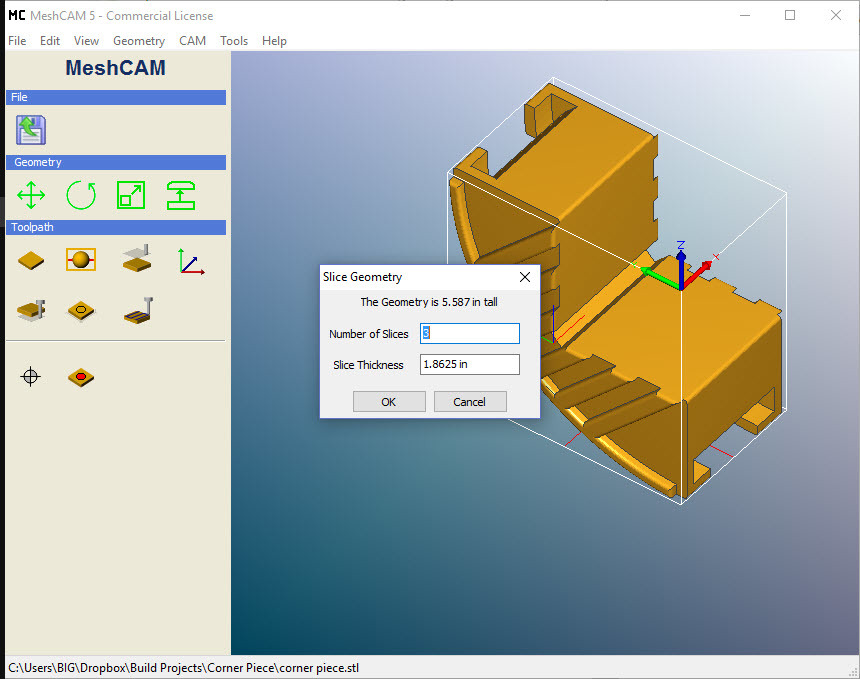 If you’re cheap like me, the software you’re looking for is NetFabb https://www.netfabb.com/ There’s a free version and it’s dead simple to use. Load your file and on the right side are some sliders. Move them and see where the line moves on your model and then make a cut. You can slice and dice the individual cuts too by selecting the one you just did. Then just export that piece. I’ve been doing the same thing to make small cars.

Pulled a random google image of it to show the interface.
http://3dprintingwizard.com/wp-content/uploads/2013/01/remove_part_1000.png

I’ve used MeshMixer for slicing large 3D models into 2 inch slabs for the X-Carve to cut. It’s free and it works great.

Here’s a dinosaur head I did recently;

Cut3D can do this. Same company as V-carve
it will slice up the model for you and you then just feed it 2" Z height blocks at the X,Y size you need and then you glue it together.
Cut3d is what I use for geometry.
Nice model I recognize it.
Zombie Hunter.

I’ve been having issues with 3D finishing toolpaths being really inefficient when cutting out 3D components that have flat surfaces equal to the Z height of the material (flat on top).

I’m slicing a large 3D component into slices so I can cut them out and then assemble them afterwards.

Several of these sliced 3D components have FLAT parts that signifies the top of the work piece being cut out.

For whatever reason, when I generate a 3D finishing toolpath, Aspire creates toolpaths that run the cutter over the FLAT areas unnecessarily… and this ends up doubling or even tripling the machine time.

I realize it is hard to visualize this problem just by explaining so I’ve made this video to demonstrate my issue:

I’m wondering if I’m missing a step when creating the flat-area vector boundaries?

Here is the original Vectric tutorial I followed:

Many thanks for any insight you can provide! Cheers