i tried the calibration test last night and everything seems ok and pretty close to the sizes, but each time the bit plunges to start its toolpath on each shape it seems to step outside the line slightly then come back in to the shape leaving a small kink in the line of the shape.

below is a picture to hopefully explain. 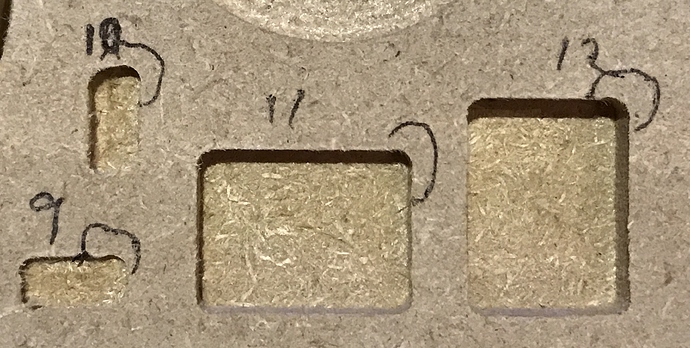 Ha!! I’m seeing the same thing. I was wondering if my Z axis is not exactly perpendicular to the waste board, so I’ve been shimming that and adjusting and will be trying again tonight. I’m interested in what you (we) find out in this thread.

all my axis are pretty bang on, if if was an axis that was out i would have though the whole shape would be wrong rather than one small kink.
Why would the router bit go off line then come back in? all the shapes and depths are within 0.1 to 0.01 mm to the calibration sizes apart from the kink bit is it a stepper problem or the gcode?

That issue is generally due to an overly aggressive plunge rate, slow the plunge rate down so the bit isn’t stressed so much as it enters the material for the first cut and it should straighten that out.

Endmills cut great on the side, but not so good from the end. Once the bit is inside the material and cutting on the side it performs so much better. Plunging too fast will flex the gantry or deflect the bit causing that little bump on the side.

Makes sense. I’ll try that in about an hour at home. ;). Too bad Easel doesn’t allow ‘ramping’ into the material like Fusion does. Could that be made into a product enhancement request?

im not sure a 1.6mm cut per pass is aggressive in mdf, surely from the example photo the bit is in the wrong position in the first place if it is cutting outside of the line?

I assume you are talking about depth per pass since you posted it in mm per pass. @ErikJenkins is referring to your plunge rate which should be represented in Inches per minute or millimeters per second. If you are using Easel its this setting under the cut settings tab. That setting basically tells the X-carve how fast to run the bit into the material. Too fast and it will try and bend to one side. 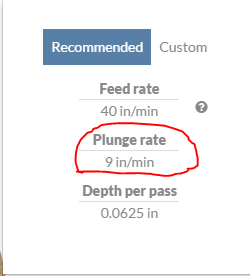 V-Carve also does the ramping in (if you choose it) and it helps a lot. It allows much faster feedrates.

@AndrewPutman - I was talking about plunge rate, not depth of cut exactly what @RickPeterson was saying.

plunge rate was at 3.8mm per second. ill retry the test tomorrow at different plunge rates and see if it makes any difference

the belts are pretty tight but i do have a guage coming tomorrow to fine tune them.

I had that issue, and my circles were off as well. It was the vwheels.