So frustrated. why does this keep happening?

For some reason your machine is loosing steps. Are there rapid moves during the operation. One of the other causes can be noise from the spindle causing lose of steps.
I’m seeing a lot of folks with this same problem. The folks at Inventables need to find what the main cause of the problem is and tell people how to correct it.

If your belts are OK, adjusting the stepper motor current might be the solution. Below are two links that will explain the process.

belts are tight, zip tied and no slippage, eccentric wheels are not loose, checked all wires everything is connected firmly. turned on spindle no motor movement or green lights on gshield, ive adjusted my stepper driver currents. ive been fighting this problem basically since i got the cnc going three weeks ago. seems to only happen on long jobs and i thought it had something to do with UGS as up til today thats what i had been using on bigger jobs where this would happen but this happened using easel so that rules that out

im beginning to think its a spindle issue either a noise issue like mentioned here or a voltage drop like mentioned in other threads. hopefully the inventables folks see this

It is most certainly a spindle issue. I had the exact same problem. A replacement spindle completely resolved the issue.

I apologize if this is a bit of a repeat. I am having some issues with the x-axis losing steps. The easiest way to describe the issue is when cutting a circle. I setup easel to cut a 3" circle outline clear through 1/2" birch ply with a 1/16 bit (from the starter set). The first pass looks great and then the second pass is pushed to the right about 1/2 the bit width. That pattern continues on the next pass. At this point I kill the job so I don't wreck the machine. I have done the following as…

How did you go about getting a replacement?

also i remember tonight i did notice a change in the sound of the spindle while it was cutting. it sounded like a drop in rpm. it happened at a point where it wasnt cutting anything that would have bogged it down. it was very weird

You could help verify that it’s the spindle by attaching a pen/pencil to your machine and having it run one of your projects with the spindle off, just a thought.

how would you account for the z travel with a pen?

I’d velco/zip tie it so that it was snug enough to draw, but could slide up when pressed as the z moves to another depth. It doesn’t have to be exact, just trying to get an idea if it’s going wildly off-path like your last project did.

Email help@inventables.com and tell them your spindle is having issues with maintaining rpm and they will mail you a replacement along with a return label for the bad one.

There is a small percentage of spindles experiencing this issue and the cause is still under investigation.

You can read more about it from this thread

Houston we have a problem! (intermittent spindle) Troubleshooting

Everything was running fine! Cutting out a signing 1/8" mdf. Half way through the second pass on the outside, it hits a snag of some sort, veers of course. So I stop the process through easel. Spindle lifts, stops, & goes to home. After that is when the trouble began. Spindle won't turn on. Either way,,,, manually or automatic. 24 volts going to the motor. I gently tap the spindle bracket with a bit wrench (I'm the wife of a master mechanic), and the spindle turns on. Speed goes up to …

Also make sure your fan is blowing on the chips of the shield, not away. I made the same mistake.

i emailed help this morning, just waiting to hear back

Make sure the set screws on your pulleys are tight as well, if those are loose it would look like this.

ran the project with he spindle off and a pen attached and it came out just fine. no wandering lines or lost steps 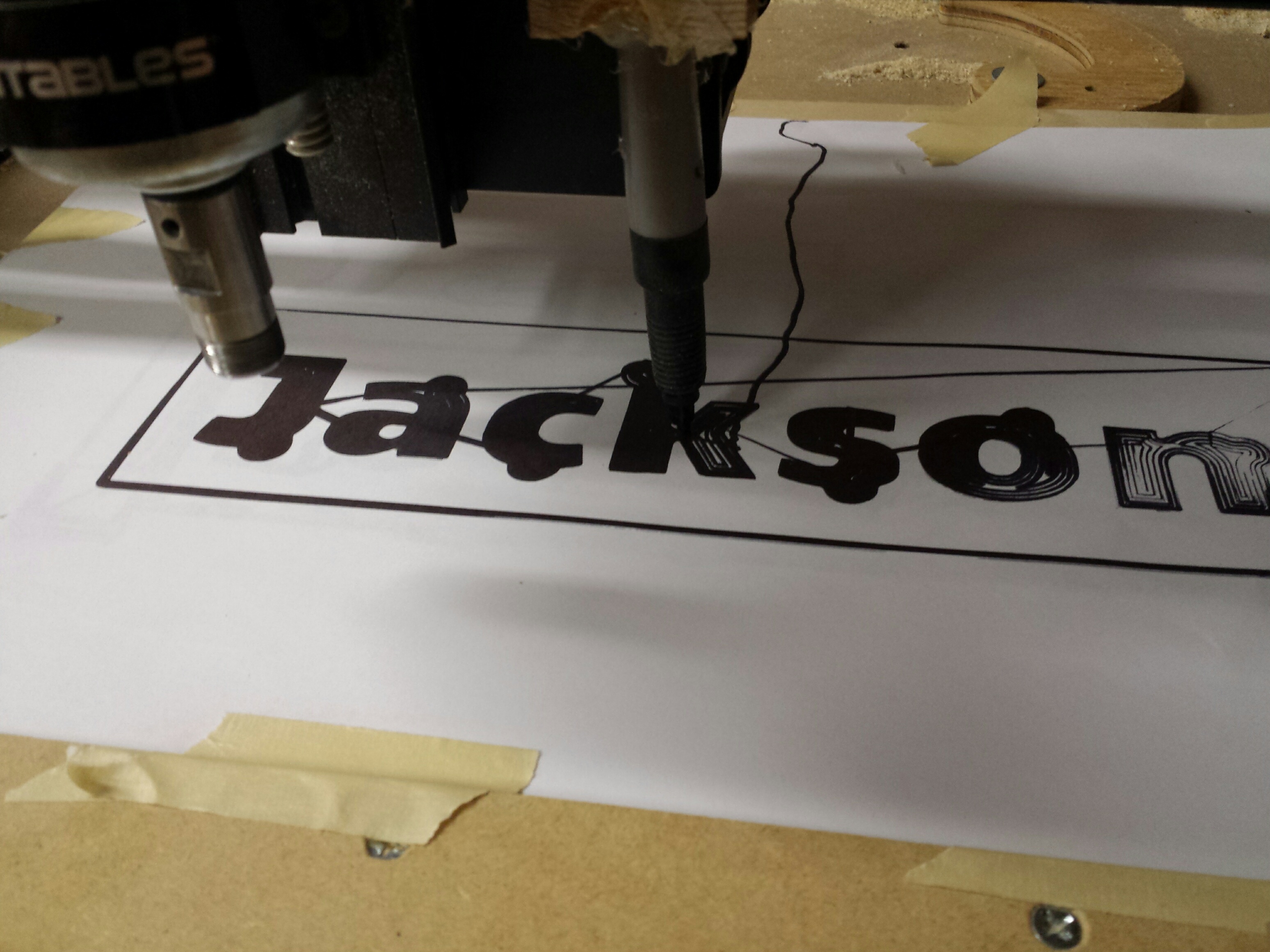 I wonder if it might be an “under cutting load” issue?

got the new spindle in the mail today and put it on. so far so good.

Same problem here… What to do?

if you are asking me, id call inventables and tell them you are having issues and want to change to a dewalt dwp611 router. get the mount from them, buy a 611 router, throw the 300w spindle in the garbage and install the 611. enjoy your new powerful machine