My X-Carve is ordered so working up some project ideas as I wait for it to ship. I use Illustrator daily for work, so plan on doing designs in there then importing SVG to Easel from there.

I’ve seen mention of other programs, like V-Carve or Aspire, but none of these seem to be Mac-Friendly except for Meshcam (not really for designing) and Fusion360 (not sure if it creates the right file type or does 3D carvings well).

At first I’m planning on doing normal carvings, but do have interest in 3D carvings as I gain experience.

Mac friends, what software do you use?

and don’t say Bootcamp into Windows…

Depends on the designing you want to do. If you are using Illustrator then you are well on your way to where you want to be with 2D stuff and even some 2.5D stuff. I use Illustrator all of the time for my stuff and just import the SVG into Easel. This process works great.

When you want to really step into the world of 3D you can look into SketchUp for simpler stuff, but really Fusion 360 is the way to go for an end to end solution… you can step through design and model and tweak and visualize and then even create the tool paths in the CAM section. These two examples are for more of a CAD/CAM approach and much more “left brained”

If you are wanting a more sculpting and artistic approach then you might want to look into Blender or even Modo 901 if you have the cash. I love using Modo, but both will work and Blender is free. With these, you would save out an still file and then MeshCam is your friend. It is great for turning STL files into tool paths.

If you just want to go super simple and dip your toes into the 3D world then I have used TinkerCad and 123DMake to great effect. They are free and easy and TinkerCad is even cloud based if that appeals to you. http://www.tinkercad.com

Thanks for the info! I downloaded Fusion360 yesterday and taught myself some basic commands, but definitely seems like a learning curve. Will look into TinkerCad, never heard of that.

I guess it would’ve helped to give an example, this would be an extreme example, but would love to be able to do “3D” carvings like this one day: 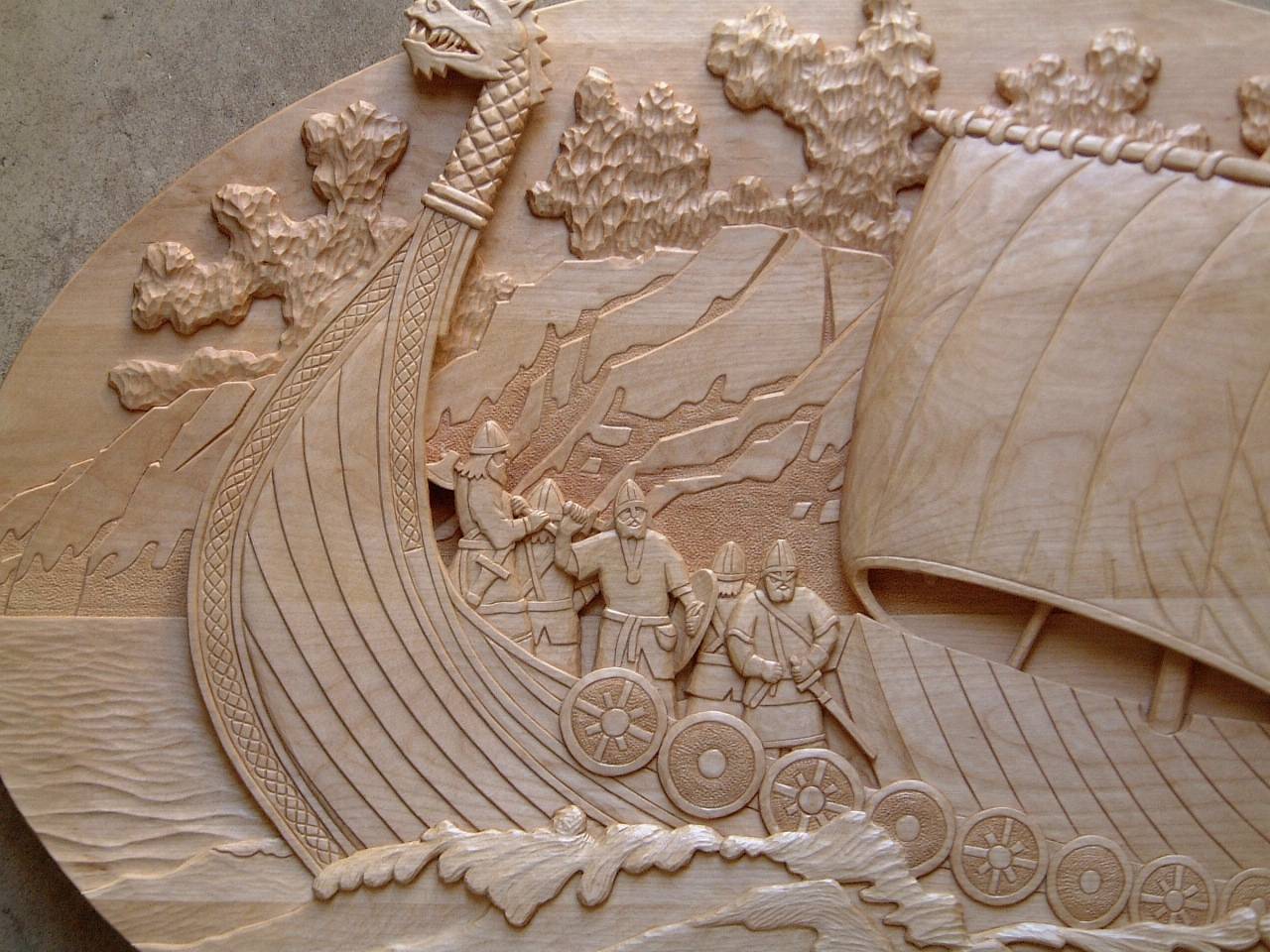 I’ve seen V-Carve having a lot of presets for shapes for carving, and maybe I don’t fully understand, but everything online looks like true 3D objects, like in Fusion360? So you would take a true 3D object, and just set it up to mill from one point of view?

Unfortunately, in v-carve you are limited to existing 3D models. It gives some 3d clipart that you can bring in plus you can import existing 3d models. In Aspire you get more capability but it costs WAY more.

I hope somebody sees this picture and points to a free or low cost program that allows us to import photos or vectors and “pull” out features to create 3d models like this.

Here is a clipart eagle head from V-carve. The selection is quite limited. I would love to be able to CREATE 3d models from art files like this.

I couldn't resist trying at least an eagle head (only had a hour). I used one of the 3m wheels to debur it... and I didn't realize I was cutting the piece from a laminated panel. Whoops. Still, it adds character. Thanks for the inspiration. [image]

I have a method for creating 2.5D carves using an image and Blender to create an STL that can then be put into MeshCAM or V-Carve and milled. I’ve written about it on here before, but it might be time to do another carving and write up a tutorial.

@michaywood as far as the image you posted. Yes and No…

No, as in I don’t think that is how the carve in the image was achieved. Looks like V-Carving to me, with different bits for the different textures.

Another application I forgot to mention that you may want to take a look at is F-Engrave… this does similar things.

In the end, I think you’ll find that you will need to rely on multiple apps and connect them into processes that fit the work that you are trying to accomplish.

A Side Note: minus a few of the textured spots, it is possible to even lay this pictured carve out in Illustrator and carve it with Easel… it just wouldn’t be the most efficient way to do it and you would have to have a high level of skill in Illustrator.

I’m in the same boat - XCarve is ordered and I am Mac user. Glad to see some suggestions here!

Also as I surf the forums, it looks like V-Carve is a type of carving as well as a software that capitalized on the name?

If so, would love to find a mac program that can v-carve (like V-Carve Pro can on a PC)

And eventually v-carving might even be available on Easel.

Tell me more about what you are doing with Blender.

I found this video example of turning a picture into a 3D STL file. I have never used Blender, it looks like it has about a 1,000 hour leaning curve.

Yeah, blender is not the most intuitive of applications. I normally use it for similar things like converting models to height map images that I can eventually get into Easel.

It is pretty powerful for free software, but the money is in refining the experience. My normal advice for designers wanting to get into 3D is to work their way up to Modo and stick with it in the long run.

I use Fusion360, it’s a great cad program with excellent cam abilities! Not to mention the free trial and awesome deal Autodesk gives.