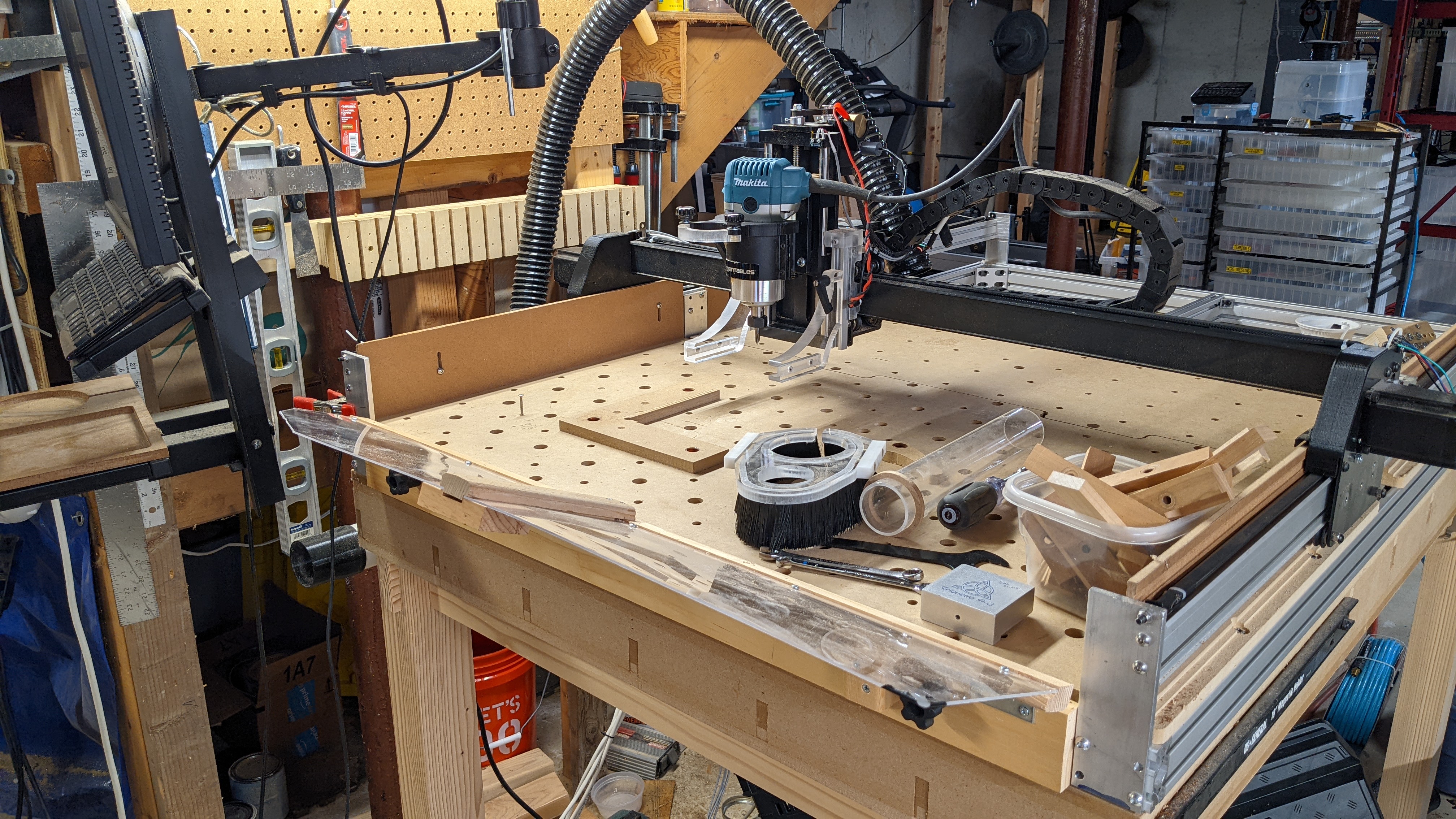 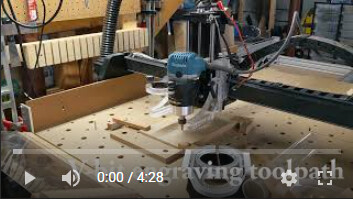 This started out as a barebones X-Carve kit bought in 2017; I coordinated it with Inventables and bought it without the rail kit, and then separately bought a 1000mm gantry extrusion and extra long Y rails from them which I cut to 1500mm, so this is a larger working area than any of the off-the-shelf X-Carve kits. I built it on a base frame made from double-height extrusions from 80/20.
The Y rails are raised about an inch relative to the stock brackets for some more Z clearance, and there’s an extra support bracket mid-span. The stock Y rail end plates are included if you want to drop it back down for some reason.
The Z-axis has been upgraded to the “Zplunge” which was available a few years ago; bottom line is that it’s based on linear rods instead of V-wheels so it’s more rigid than the stock Z axis.
The dust boot is my own design, made on the X-carve of course out of acrylic. Back when I made it there weren’t really good dust boot options on the market, but the design of it is generally similar to the official x-carve dust boot that they sell now; it snaps on and off easily for tool changes, and the dust boot height is set independently of the Z axis.
The steppers are upgraded to larger than stock for a bit more torque. The belts were upgraded to 9mm wide 3GT, so less stretch and you won’t be skipping any teeth.

The wasteboard is my own design, made out of MDF - it’s got a grid of 1/4-20 threaded inserts for clamping, as well as a staggered grid of smooth-bore holes for cam clamps. I designed the bed in 3 sections so that I could use the X-Carve to fully machine its own wasteboards (rotated 90 degrees), and you can replace a section individually if it ever wears out. I never actually got around to making the rearmost section of the wasteboard, because I never got around to carving something that needed the full 1500mm extent of the Y axis.
Personally I don’t like the approach of carelessly gouging the wasteboard, so it’s fairly close to pristine condition.

The controller is custom, but inside it’s just GRBL with an arduino and a protoneer-style stepper driver shield which uses pololu-style modular stepper drives so you can easily replace them individually if you manage to kill one. There are independent stepper drivers for each Y axis motor, rather than current-sharing with them in parallel.
There’s a relay built in for automatic spindle on/off control with normal M3/M5 commands in your G-code. The spindle is a Makita RT0701C.

There are a few other odds and ends, like dust shrouds around the drives on either end of the gantry, dust shields along the sides of the Y rails, a caddy for the touch probe, etc. There’s also a Triquetra 3-axis touch plate in addition to the stock Z touch plate. Various wooden clamps and 1/4-20 bolts are included, like what you see used in the video. I’m not specifically planning to include any cutting tools, but I don’t mind throwing in a small assortment if you need them to get you started.

No computer included, though you’re welcome to take the monitor arm with keyboard, mouse and pendant trays - including the monitor and keyboard - if you want it, no extra charge. No software included - I always used free software like CNC.js to run the machine, and Fusion 360 to do all my CAD and CAM.
I’ve got the machine sitting on a torsion box made out of MDF, which is also included if you want it.

The machine is in good working order; follow the link for a video I took today demoing it.
I no longer use it because in the meantime I built a heavier machine of a different design.

I’m new to the forum, so it might be that I don’t know how to do it.

Just click on his name then hit message that will personal message him and welcome to the forums.