I think that’s all the needed info right? Now, onto the problem. This is my very first part ever on any machine so i’m still learning. Everything was cutting smooth as butter… 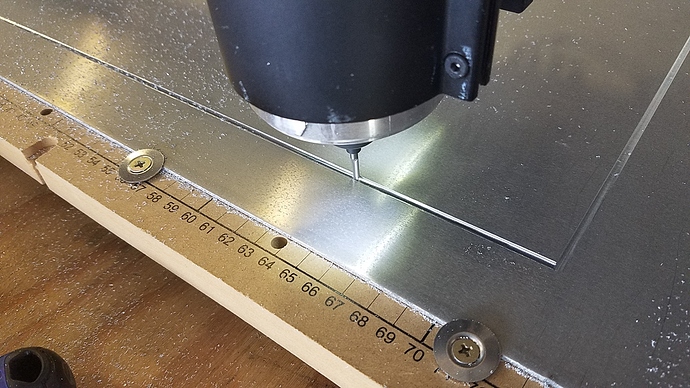 Until some where around .055 deep when this happened 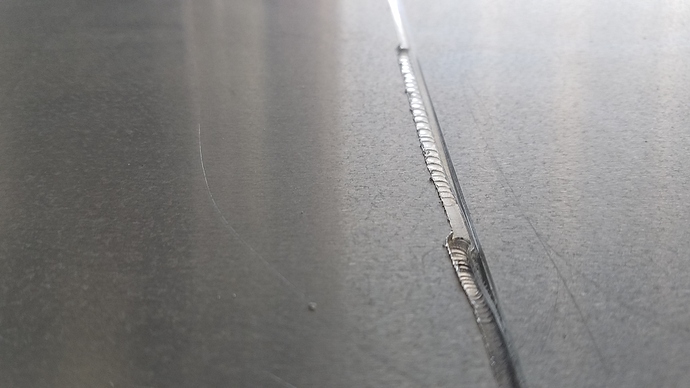 I stopped it as soon as I could and went back to machine zero. After checking everything over and not finding anything loose or unusual, I started again. Made about 3 more passes, then this!

(Nevermind that little cut to the left. That was a test I accidentally stopped earlier in the morning) 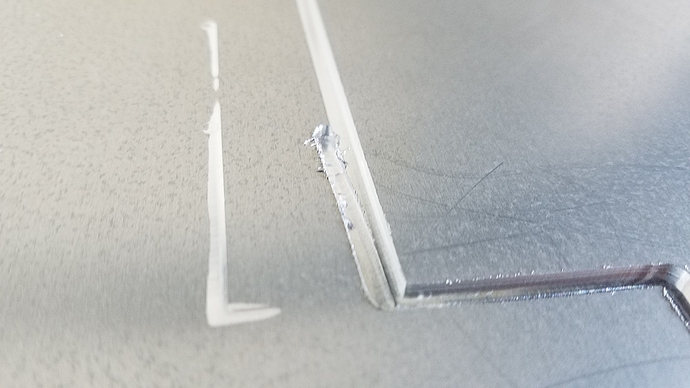 So now, a little over half way done, the cut starts acting up! 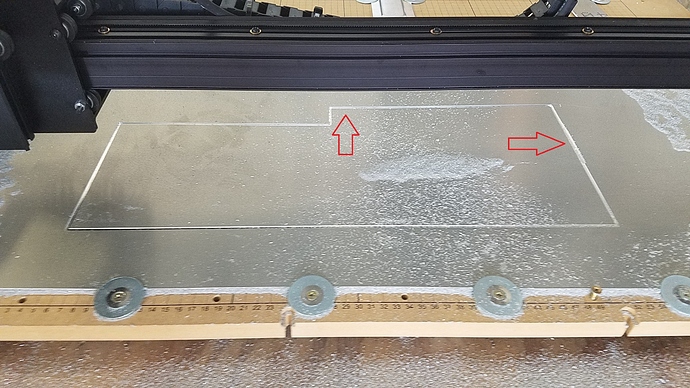 Everything was spot on! Then out of the blue the bit starts walking away and the machine sounds like it’s about to explode! Everything i read here and else where said to take it nice and slow with the set up i’m running. I did notice that for the 3 or so seconds before I shut it down it started cutting bigger chunks and it actually wasn’t doing to bad until it went into no mans land. I wonder if it could be cut better if I upped the feed rate for a better chunk (what’s that called again?)? Also, should I try using oil or some sort of lube? Is it possible that I overheated the bit when it started to get further into the cut and that’s why it took off on me? Did fine at a shallow depth but once the sidewalls started coming up, the heat might have gotten the best of me.

Can someone with some knowledge please school a noob like myself? I think I can still salvage the part by cutting outside the line instead inside. It shouldn’t bother anything in this particular job, but I can’t go messing up good aluminum either so the sooner I sort this out the better. Thanks everyone!

That’s a big cut, make sure you are vacuuming out the chips as well as keeping air blowing on the bit. I also wipe the bit down with 3-1 oil before cutting. Single flute router bits work good for me,

First things first. You say this is your very first cut on any machine, have you done all the ‘standard’ set-up tweaks that most folks have found necessary?

Set pot voltages?
Checked & double-checked that all motor pulley screws are locked and not slipping?
Double-checked all wiring connections are electrically solid?

Your image looks like you may have lost some steps somewhere.

I was not vacuuming on the first “jump”, but was when the second one happened. No air either. I will be sure I have either or both next try tomorrow.

Everything but the pot voltages. But again, I was cutting for over an hour before the 1st mistake happened. I have another thread showing some of my machine set up. It’s mechanically and electrically sounds. The first misstep happened seconds before it started to walk off and act up on me.

Just before the images above happened, I was cutting this shape of the overall panel. After an hour, I realized that I was cutting inside instead of outside the line. So I stopped it. Perfect cut, but I probably stopped it around the 50% complete mark. Same specs as above. I wonder if I had let it go would it have done the same thing when it got a little deeper? 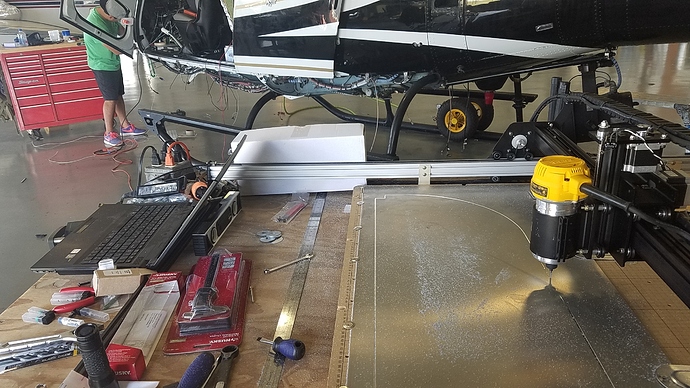 … I’m almost positive it was because of the heat. My feeds and speeds are wrong… 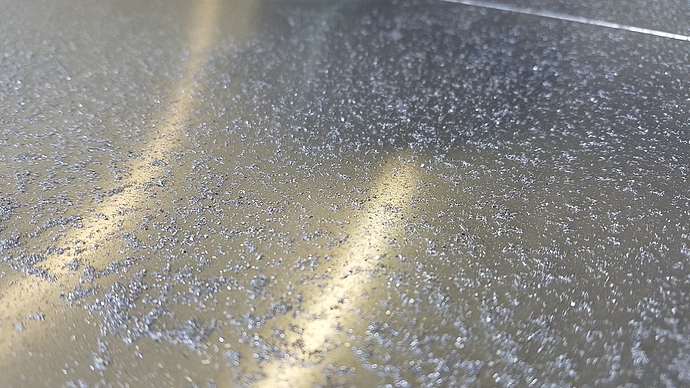 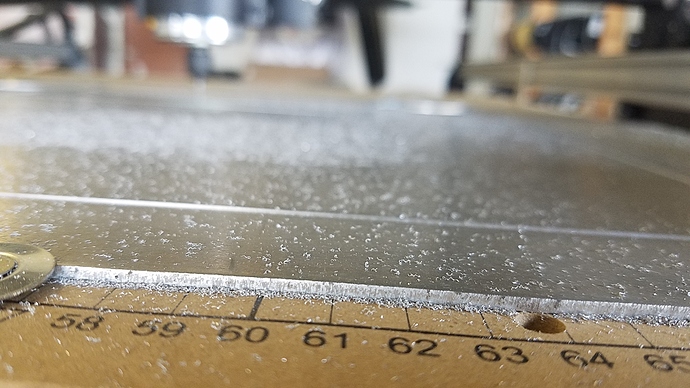 Just looking at what you posted, 3 flutes with your feeds and speeds is probably not helping. 15ipm plunge is pretty fast. You might want to bring that down.

Personally, I wouldn’t use 3 flutes with the dewalt, but you can try setting on 1 and bringing your feed rate up. do a test and keep increasing. Try 30, 35, 40 and so on.

Check your bit to make sure you haven’t welded any material to it.

Maybe it’s not the case, but typically issues where the machine loses steps because of slippage or isuffient motor voltage, always occurred when my machine was under load.

Even if the depth of cut remains constant, the actual tool loading is likely to progressively increase the deeper the tool is within the material. This will occur simply through friction and will be exacerbated by any ‘flex’ in the machine, any movement of the material or by any lost steps.

The greater the tool loading you have, the more likely it is that issues relating to belt/pulley slippage or low voltage will begin to show up. Once the ‘true tool path’ has been lost (even by a tiny amount), this loading can potentially increase enormously. Missed steps, will also most likely tend to show up on ‘corners’ and curves.

I’d be very tempted to adjust the voltage ‘by ear’, purely because it’s such a simple thing to do. I’d also suggest the ‘bolt’ stiffening mod on the x axis, again because it’s very very simple to do. Even if they’re not strictly necessary, I’d personally do this just for piece of mind.

I’d then test things using some scrap, using a shape with some long curves and lots of corners.

I’ve not done much in the way of milling aluminium, so I cannot comment on the feeds or speeds, but given its cost, I’d be trying to eliminate potential machine errors first.

Something else to consider as well. Fair is one step above poor on the scale.

Just a guess mate , but would it have anything to do with the helicopter that has landed 6 feet away ?

Do you have a link to what the voltage should be? Do I read it off each motor under load or can it be taken from the board so I can get them all quickly. I use a high end multimeter daily for avionics work (As Greg alluded too in his post about the helicopter next to my machine

). … which by the way shows my stiffening mods for both the X and Y.

After reading some comments from @AndrewRemmers about cutting aluminum, I believe he is spot on about my situation here. As the cuts start to get deeper, i’m overheating the bit. To cure this, he cut a wider channel to relieve the stress/heat from getting deeper in the material. I also think maybe i should switch to a 2F bit instead of a 3, or up my feed rate a bit.

Also, is there an easy way to get my passes to make wider channels? Basically if i had a 10 cut job, turning it into a 20 cut job. The 2nd being a step over cut and then just bouncing back and fourth between cuts until it’s cut the piece out.

On my conventional machine I get this effect if I machine too soft aluminum without lubricant. The aluminum sticks to the bit and it rolls its way out of the product I am machining. Once this effect starts I cannot recover and have to replace the bit. I have not done any aluminium yet in my ShapeOko2.

In order to make wider channels I would not draw a line and choose inside or outside but define a channel, two lines parallel just a little bigger than the bit diameter. The CAM tool should then make two passes per depth, one inside the outer line and one outside the inner line.

Using aspire, finding out how to make that channel was tough. I couldn’t even find anything on google talking about it in the manner I need. But, after just having gotten off the phone with @CharleyThomas, he told me about the “offset” button in the Drawing tabs which should do exactly what I need it to do. Though having just clicked it and recalculated the toolpaths, the time “est time” didn’t change for the wider cut… I may be doing something wrong or maybe it just doesn’t account for that?

Anyway, Charley suggested I up my feeds and speeds anyway which I have to agree with. I think it’s clearly a heat issue and it’s probably all from my low rates. .09 material should be easier to get through than what I’m seeing so… I have a few things to try now

I’ll update after my findings

When I was cutting aluminum and I wanted a wider channel for cutting out a part, I selected the profile, copied it and made it larger…I then selected both profiles and created a pocket toolpath between the profiles.

Using offset will cut the same width just offset from where you really want it to be.

That’s what i was going to do, I was just hoping there was a quicker way. Like an “enter pocket channel size” button.

Have you tried lubricating the bit while cutting?, every spindle has a runout so the cut should be slightly larger than the tool itself. My Dremel e.g. has a runout of 0.1mm so it cuts 1.6mm wide on a bit of 1.5mm.