(SOLVED... For now )Anyone else having issues with the latest Chillipeppr release?

While I use Easel for most of my simple jobs I also used Chillipeppr for complex cutting that would take too long with easel.
Well today when I tried CP it told me I needed to update the JSON server so I did, now I have no control over the machine even though it shows as connected and a busted homing switch to boot.

Is anyone else experiencing issues with CP?

Last night when I tried to load it, it did not work as usual. It was not reporting any machine-positioning data, etc. The machine homed successfully, but I wasn’t about to trust it with a cut, so I sent the job with UGCS. I figure there’s just some kind of oddity with the newest update, I’ll wait a couple days and try it again.

When I got home tonight I fired up the machine for the first time in a few days. ChiliPeppr wouldn’t unlock the motors. Then I saw a message about updating the JSON server, which I did. Now when I try issuing commands I get a lot of garbage mixed with error codes in the serial port console, and it still won’t let me unlock the motors. It gives an alarm error but has some random symbols mixed in. Too bad. I had a gcode file all ready to load into it tonight.

Thanks for chiming in, at least I know it was not “Just Me”

I downloaded UGCS and spent the last hour figuring it out (still a bit to learn) but I have my large file running with it now (fingers crossed). While this is a stop gap measure I do want CP back up and running.

Yeah, it’s certainly not as easy to use as CP, that’s for sure. It does work well, though. Up until a few days ago, that’s what I used exclusively and generally with very good luck. I’m hoping CP is back up soon, I like it better.

I used it yesterday, and it seemed fine.

Same here managed to cut a few jobs on it last week and now nothing at all… cant unlock from alarm - click to reset and the serial port console is spitting out jiberish.

I tried it tonight, and it seemed fine.

No dice for me tonight either, sent the job with UGCS again. I’ve updated the JSON server like they asked and everything. I note that in the area where I select the port I want to connect to, I can’t select GRBL in the drop-down anymore…

@DanBrown
make sure the arduino comport is NOT selected, then you can select Grbl in the drop down menu. 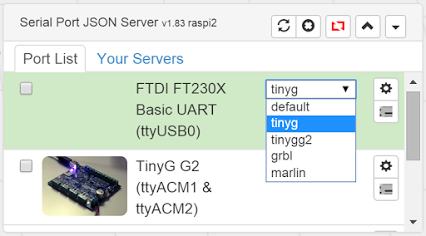 Ever since the latest update I have not been able to get CP working. This morning it almost started working before it hit me with errors again. I try a jog command and it spits an error but letting it sit for a minute it will eventually do the command, definitely not confidence inspiring!

I tried posting on the google+ chillipeppr page but got no response, will try John lauer direct

Ah, interesting! Thanks, I’ll have to give that a shot. Kind of annoying, I’d just really started to like using CP!

Looks like there is a workaround for now, see my response HERE

I’m looking into the issue. There were no changes to the Grbl buffer in the 1.83 release, so it must be a layer up in the Serial Port JSON Server this is happening.

In the meantime, you can go back to 1.82 by downloading the appropriate SPJS from http://chilipeppr.com/downloads/v1.82/

Thanks John, your support of CP is one of the reasons I use it and will continue to do so

Thanks for the reply, John. I’ll give 1.82 a try tonight and post my results.

I try to never make changes to Serial Port JSON Server because it’s platform dependent and that is one of the hardest things to deal with. It’s why 99% of the code for ChiliPeppr is in the browser. So it is very possible the problems some folks are seeing is only on one platform because I’m seeing everything working and so are lots of other folks.

We’ll nail it down though.

So would it help to know that I’m running Windows 7 64bit and Google Chrome as my browser?

OOPS! spoke too soon, just tried 1.82 and still having problems but 1.80 is working.
In 1.82 tried unlocking and I get errors 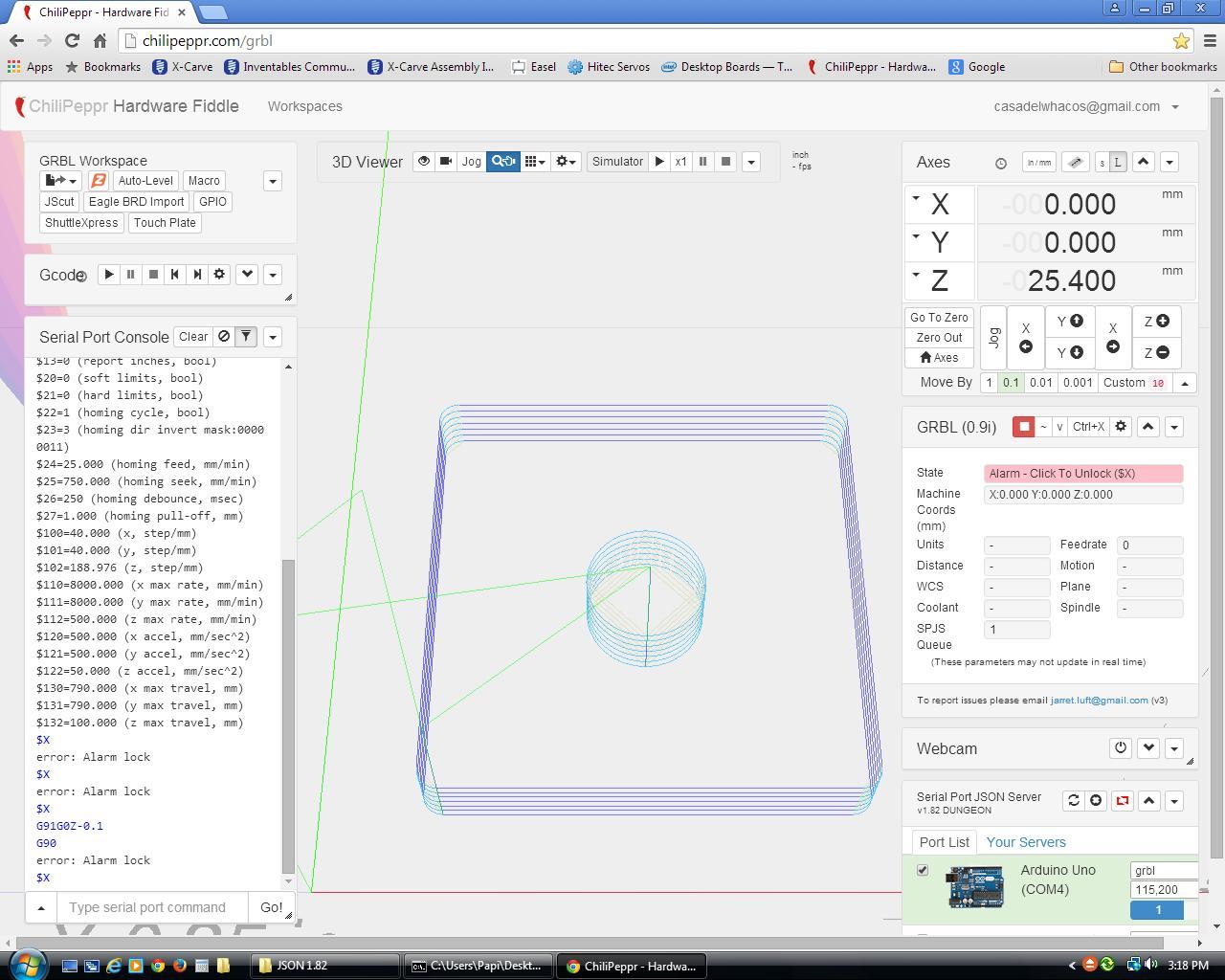 If there’s any way we can help, let us know! I’d be happy to provide details, system specs, etc as needed.

At this point it looks like we’ve narrowed it down to both 32-bit and 64-bit Windows and Grbl only, not TinyG. So we’re getting closer to figuring out the deal. What’s interesting is I did move to a new serial port library in 1.82, so you saying 1.82 doesn’t work either helps. I think it’s the Go lang serial library in Windows. It was the Arduino.cc guys that moved to that library so we could fix the port closing bug, however, that seems to have introduced this garbled text bug on Windows only.