Guys!! I’ve figured it out!! I’ve seen a few threads asking about this, but no one seems to have a solid solution. Instead of answering each, I’m just posting it as a new thread. It’ll be interesting to see if this works for other people, and what other variations people might come up with.

OK so the goal was to generate text that consists only of single line paths that can be used in Easel; not outlined characters, not filled. This way it can be engraved/carved/lasered in a single pass, without tracing back, without thickening/bolding the characters, just like writing by hand with a pen.

Here’s how I’ve done it:

I’m using 2009 AutoCAD LT. I use this because I’m already familiar with it and can draw to scale.
Other fonts might work, but most likely they’ll need to be .shx fonts. My understanding is that they’re made with line paths, unlike normal truetype fonts that are outlines…??
Printing to pdf is the key to this puzzle. It’s the only way I’ve found that converts the text to single line paths. Exploding in acad didn’t work, and expanding in illustrator generated outlined font. Also, I think you’ll need to use the pdf printer from Adobe, not another software company. I’ve had trouble with others in the past. Could be wrong, but that’s my experience.
I use Illustrator to convert to svg just because that’s what I have and it works. I’m sure you’ve all got different programs to do this.

Anyway I hope this helps some of you. It’s certainly opened the door to a lot more projects and paid work for me. Happy carving!

Screenshot of my victory! 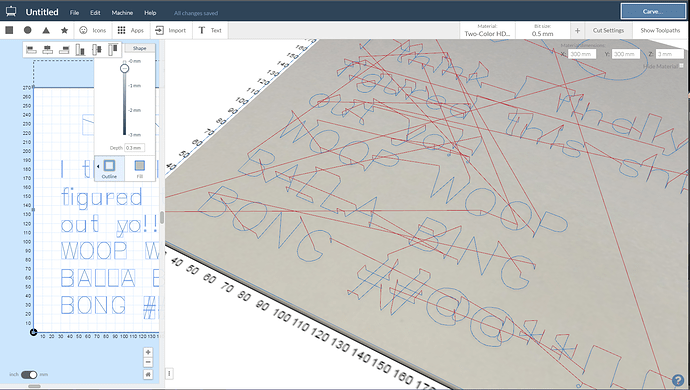 It might not be ideal, but if you have CorelDraw you can use the technique below. It works pretty well. [image]

Does Easel use Truetype fonts ?
If so, there are some single line fonts available here.

I’ve used these with CamBam and engraving. Not an Easel user so apologies if way off track here

Inkscape uses whatever fonts are natively installed on your PC. Easel does not.

Of course there is an easier way after I figure out a hard way to do it haha! @PhilJohnson does Inkscape allow you to draw things to scale? For example, if I wanted to cut out a square 100mm x 100mm, would it be easy to do that accurately?

I can’t seem to import svg into easel, I read that it is possible but no luck.

I create my single font Hershey text, select it, path to object, save as either inscape.svg or plain.svg

Easel will not open when I import .svg.

would really appreciate any help on this

Yes just text, I select all and then Path, object to path, ( this does not do anything obvious on the screen)

Then when I go to save as, I only see inkscape.svg or plain.svg

I’m not sure, I will uninstall and try again

That sounds great! How would it work with other software like Inkscape?

I reloaded Inkscape and now I have the optimize option.
I then found the issue with the spaces and couldn’t figure this out until I read the post above.

Is there a way to produce this single line svg in Adobe Illustrator?

This may be a stupid question, but while I have succeeded in creating text in Inkscape and importing the .svg into Easel, it tells me there is nothing to carve. My impression is that Easel simply will not deal with anything with zero line width, so how do you deal with this?

I’ve run across the same limitation with Easel in other areas. For example, if I specify a 1/16" bit and want to make a round hole that is 1/16" diameter it won’t do it. In fact, I have to increase the diameter by 4 or 5 mils before Easel “sees it”.

Well, a mill bit certainly can cut without moving laterally, but let’s focus on the line text problem: I have a path, how can I get Easel to simply follow it?

Phil, here’s what you posted here some time ago:

I have done as you suggested and can see the text, but Easel won’t carve it. How do you do it?

Regardless of how I set cut parameters (fill, outside, on path) Easel says there’s nothing to carve. Changing the bit size changes the width shown, but no matter what size, it won’t carve.

I’m using a font called “CamBam_Stick”. I don’t see a font called “txt” in Inkscape, but suspect it is not truly a single line font, as CamBam is. “txt” fonts are available from multiple sources, so I’ll try that.

The “txt” and “CamBam” fonts do not behave the same. I was able to replicate your results with “txt”, but doing exactly the same thing with “CamBam” fails. The bug you mention does not seem to be the problem. Instead, just clicking “simulate” generates the error message “There is nothing to carve. There are no objects in your design that can be carved with your current settings.”

With “txt” I get the same message if I select “fill” and set the bit size to anything greater than 3 mils (I imagine that the exact number depends on how much you have scaled the text), but “on path” works at any size. “CamBam” does not work under any circumstances/settings.

BTW, I did some screen captures, but don’t see any way to insert them here. How did you do it?

Rough path was excellent. Nothing carved on detail path. Support team. Looking into it. They said that the five lines of text might have too much detail. I used the new folders and made a copy of the file and split into different folders
and it is carving now. Did have one other issue. The safety height is fine on all but TWO of the pathes as it is cutting. The spindle did not raise high enough above the board in two places where I took out the text. All the remaining safetyheights were fine. I was a little surprised by that