[SOLVED] Squaring the bit on an X-carve

I’ve been able to solve my issue. Please read through the posts to understand the issue.

I’ve read through some posts about squaring the bit. I’ve decided to go the “credit card shim” route. I’ve found that in order to get my bit square I need 4 credit card thicknesses to get close… within 0.5° of square.

So now that I’ve placed the shims in there the bolts aren’t long enough. No worry, I’ll head to the hardware store and get longer ones.

The thing is… why is my X-carve so out of square to begin with? Is there somewhere else I should be looking? I’ve searched the forum for answers and that’s how I found the credit card shim thing. Is that all I can do? 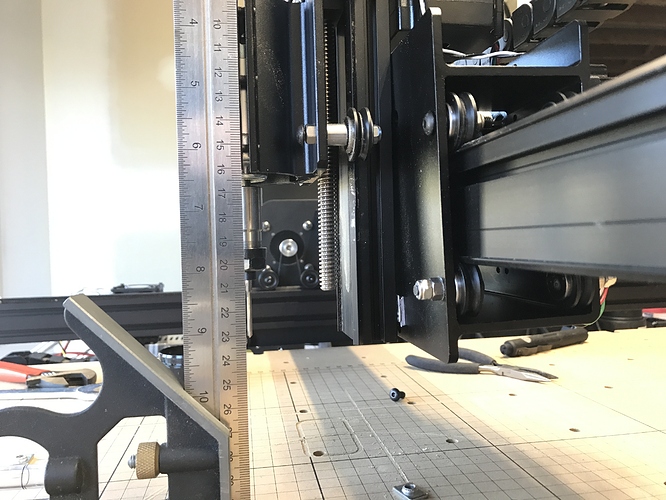 I have thrown away(or modified) a dozen check squares, T squares and combination squares (cheap ones) because they just aren’t square.

Not saying this is the case, just saying that it is possible that a bad square can amplify any bad measurement

That’s what I did before the shim job but it was the uneven skim cut that led me to square my bit. Hmmm

I tried that too. It helped a tad. I even tried the same with the Y rails… pushed down on one end pulled up on the other. Hmmmmm

I’ll check the square but I used a drafting triangle as well… same result. Hmmmmmmmm

I usually default to my drafting triangle, too. Or a block of wood cut on my crosscut sled.

Still scratching my head and searching for ideas.

Thanks so far guys… good ideas and tips.

Yeah, probably. I’ll start over again and see what I mixed up. If that doesn’t work I’ll just do the shim job.

You can see my issue in the photo really (I think). It looks like the X-carriage is rotated on the X-rails. Like it’s clocked a bit counter clockwise in the view I took. Would an assembly mixup throw it off that much? That’s where I’ll start my reassembly.

My x-rails are square too. All the rotation starts with the x-carriage.

What x rail do you have currently ? One piece or two? I had problems like this from my original two pieces rail twisting I never could get it really square

Have you checked squareness on multiple spots on the wasteboard? I remember seeing somebody having to shim the wasteboard up because it Sat lower than other parts…

I’ve got the OG two rail setup from three years ago. The rails are nice n square though. I’ve gotta dig into the carriage.

I’m with ya Robert. I’ll dig into the carriage. It’s quite possible I mixed up some parts during assembly.

I’ll check that out… good idea.

Look at your V-wheels. Are you missing a shim washer between the bottom V-wheel and the X carriage? Looks like there is one on the top wheels. Can’t see the bottom clearly.

I solved my issue with squaring the bit. As some, including myself, assumed, I assembled the X-carriage V-wheels incorrectly! Some of the V-wheels were missing the washers! Not sure how I did that but, I did that.

I’m going to work on dialing it in some more but it’s definitely in the ballpark now. Just some tweaking here and there and it’ll be golden.

Thanks for all the tips and tricks everyone. Hopefully this helps someone that’s dealing with the same issue.

way to be more persistent than the machine!