The instructions and video make it seem like you should be able to easily thread the four M5 screws. Mine don’t fit. I measured the hole diameters with my calipers to be around 3.7mm.

Is it possible the holes were tapped to the wrong size? Or am I just not using enough force to get the M5 in?

FWIW, a lot of holes on my plates were undersize. Not sure if it was burrs, or, something else.

So, i’m leaning towards the holes are not undersized. They’re the wrong size… Unless its normal to take an enormous amount of time (and weight) to drill these screws in. I guess keeping these steppers in place (but not flush) is important? 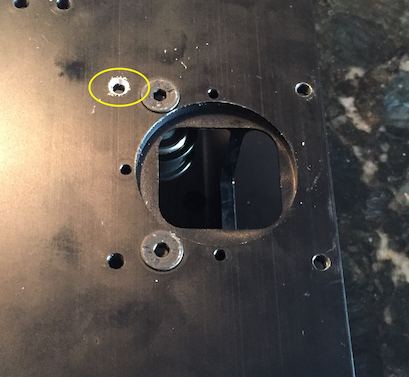 Mine went right in! Um the screws they sent were too long but no worries they fixed that issue

I don’t think those are the right screws, looking at my machine which I assembled about 10 days ago, the socket head screws are smaller.

Yep after looking very close those are definately the wrong size, so maybe they gave you the wrong screws or a mis labeled bag.If I remember right the screws should have been packaged with the motor in the box.

Yep after looking very close those are definately the wrong size,

No, the screws are the correct size. I measured them. Also, they visually matched all of the other M5 screws in the kit.

Inventables sent me a new carriage, as I suspected, the holes were the wrong size. Occam’s Razor.

We bought a bunch of extra prototype parts for marketing purposes. Marketing did not use all of them and returned them to stock. They did not realize that there was a change before we ordered production parts. Therefore several old rev parts got mixed into the production parts. We did not know this until we started hearing about the problems from our customers.

You will see the change in the hole types.

Corrective Action: Marketing got an old school scolding about messing with production parts

I guess this is your way of saying I should have butt out. Sorry, just trying to help you as my screws WERE smaller so I assumed you had the same. Either way I am glad you got it solved and hopefully your on your way to enjoying your machine. Cheers

I guess this is your way of saying I should have butt out.

Not at all. It was my way of saying “I over thunk it.”