Some diagonal lines are fine, some notably off-track

I’d like to use Fusion, and V-Carve, but I’ve rolled back to just using Easel to isolate my problem, of the X-carve wandering a bit.

See attached. The machine starts in the bottom-right point of the star, and goes counter-clockwise. It gets about 1/2 way around the star, before it gets to start weird, but then re-starts the second pass just fine again, and then goes wonky at the exact same point (passes of .06", 30ipm, 1/8" bit, birch plywood) 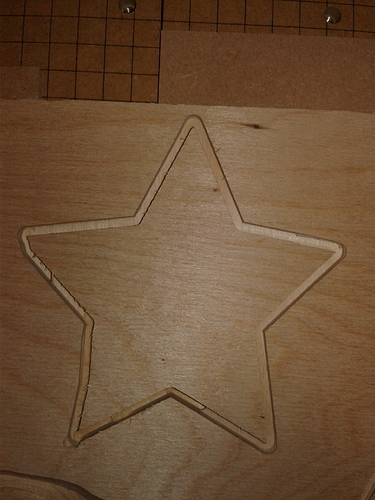 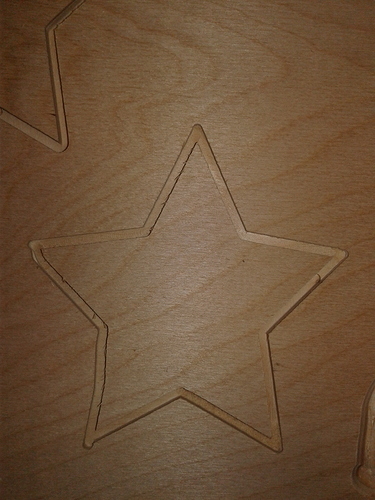 Have you checked for proper belt tension? or v-wheel?

The fact that it is a repeatable pattern likes that makes me suspect it is a mechanical issue that is occurring when the bit is making a specific kind of motion against the wood. (like diagonal cuts while moving “up”, etc)

My thought is something is loose, probably a v wheel?
Be sure to check your Z axis v wheels too. It might be flexing more as it moves “up” flexing back from the gantry rail as oppose to “down” and towards the rail. (or vise versa)

Ugh. I recalibrated my potentiometers just in case, tightened various nuts, bolts, and wheels, re-tightened a few electrical connections, and squared-up my z-axis to the table a little better, and…NO CHANGE.

I can cut out a square just fine, IF it’s also square to the table. But rotate that square 45 degrees (diamond-ish), and it gets these two little jogs, on the far-right and far-left corners. Top and bottom corners are fine. I went down .3", at .028" per pass (30ipm, 1/8" end mill) and every single pass was the same: straight line, straight line, mild jog, straight line, straight light, identical mild jog again, etc. 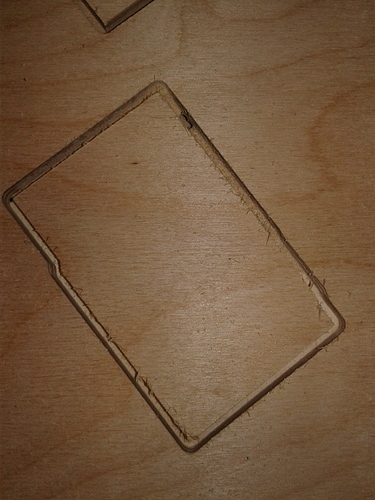 That’s so weird. Have you checked all the wire connections of your steppers? (at both the motor and the controller).

That is really weird…
I have to agree with Robert, triple check your pulley.
It might be loose enough that it slips just over the flat area so it only affect a specific section of the cut…
But then if that was the case you should see it if you are cutting along a straight line on the affected access… ?
I guess it would manifest as a change of speed along the cut? Slowing down as it slips then sudden jumping back to the proper speed as the set screw hits the post? Hard to see but you might be able to hear it as a change in sound as it cuts?

Take a close look at your belts too. It could be a bad / damaged tooth on the belt