Some quick tips on cutting projects

Not sure if any or all of this has been posted before, I’d like to think I’m not reinventing the wheel but hey, there might be a few good ideas here that help and some have saved me a LOT of trouble. This board has been invaluable with help so thought I’d try to contribute.

If I’m doing something that isn’t mission critical regarding measurements - meaning I can fudge it a little in either direction for depth - one can save carving time by adjusting either the depth of the tool cuts or the overall depth on the item. For example:

You have a project with cuts that will be a depth of .1". Your X-Carve is set to .028" per pass. That’s going to be four times. One could adjust the depth to .099 and the X-Carve depth to .033, which is close enough that it should work fine but it saves you an entire pass. Depending on the size of your project this could be a HUGE time saver. I’m not advocating changing your tool depth to .1 per pass or anything, but a small increase hasn’t caused me any issues. Basic rule of thumb I always heard was half the width of your bit anyways.

Speaking of fudging, I’ve also lied to the Easel software about the size of my bit when I had a project that wasn’t super critical but the lack of a cut would look weirder than a slightly thicker one. I wouldn’t do this on parts that have to fit together, but if you’re carving a piece of art, sometimes entering the size of the bit as say .10 instead of .125 will make something carvable and still presentable without having to go to a .0625 bit and waiting a lot longer for the project to finish.

I’ve also had to drill simple holes in stuff before and used the X Y Z controls that come up when you start to carve a new project as a manual drill press. For me it’s a lot easier than measuring, drawing out the project, etc. I can at least do my pilot holes like this then come back with a hand drill.

You can stack tabs on each other to cut down on the number of them on a project - sometimes I have had items I was carving that four tabs didn’t make sense, so I pulled one on top of the other. I also like adjusting the height and length of the tabs as needed, usually you can get away with much smaller ones. It’s a fine line, but smaller tabs especially on a curved edge are a lot easier to deal with when you’re sanding them off.

For most substrates when I’m setting the Z height to touch the surface of the item, I’ll either put a piece of paper underneath and go down in .01" increments until it touches the paper (meaning I can’t move it) or I’ll actually turn the spindle on, and I can usually hear the bit when it first cuts into the wood.

If you can, don’t put a clamp near your X and Y 0.0 coordinates because if there is a problem with the carve and you cancel it, the spindle may cut into the XY=00 clamp on it’s return and just add more mayhem. Don’t ask me how I know this.

Oh, and advice from my dear departed father long ago - Measure twice, cut once!

Great tips here, Pete. Thanks for taking the time to write this all up.

Great tips, I think quite a few of us have “theoretical” experience regarding poor clamp placement.

The one thing I can add is that for projects requiring a nice bottom finish, I’ll tweak the cut depth like you mentioned so that the final pass is .005"-.015". That usually cleans up marks from the aggressive cuts and is usually shallow enough that both upcut and downcut bits are effectively the same, preventing the bit from pulling up or pushing down on the material and leaving a smooth bottom.

Regarding the clamping strategy:

I only put clamps OUTSIDE the area that imaginary triangle covers. 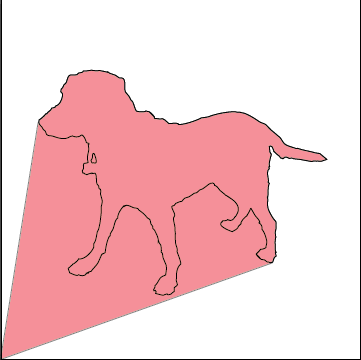 The spindle won’t go outside that area, even if you cancel mid-job, so it’s safe to clamp there, but the closer to the origin point the less material you have to clamp with.

You cut the wrong end, silly!

On a serious note: I find it advantageous on nearly everything I carve to use the center of the object as my X0, Y0 point.