Spacing between lines of text

I have 13 lines of text in a project I am working on and I want equal spacing between them. Can this be done besides using the old eyeball method?

Hi, Seth,
Yes please show me how. Never messed with vectors before so it will be good learning lesson for me! :))

@SethCNC is most likely talking about selecting a line of text and then sending it through the Xploder app. When it comes out, you will want to select all of the characters in that line and combine them to make them a single object. Do this for each line and delete the original text objects. Then use the Equal Spacing app. You will need at least three lines to use the Equal Spacing app. If you do not have two or otherwise just wish to do it manually, just place one object, select the center for the position coordinate, and then place the other object(s) at that X or Y distance plus the distance you wish their centers to be apart by.

I start out a little different usually, combining a line of text with a 0 depth shape allows my to skip the shape exploder… but the rest the same

Although, the two methods do generate extremely minute differences in the resulting objects. The differences are very small though. Below is an example of one stacked on top of the other with the top one being set to a depth of zero. You can see that it appears to have a faint shadow in the design area, and in the preview area, you can see that a few toolpaths are generated if you use a v-bit (22-deg in this case). It does look like @SethCNC’s method generates a vector with a larger bounding box than the one generated using the Xploder app.

That’s just something to be aware of. As to which one is actually the most precise one, I have no idea, and I can not imagine who would really care that much…

Thanks to both of you!! Now I can move forward on my project.

@SethCNC’s method generates a vector with a larger bounding box than the one generated using the Xploder app.

Let me just clarify what I meant by a “Shape” with a 0 depth It was not another font box with a 0 depth, but an actual shape and then combining… since anything with a 0 depth, placed atop a blank canvas section will be erased when combined… i use this trick to quickly convert font text to vector nodes… 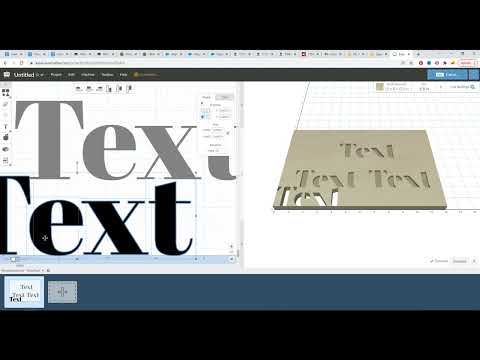 I, for one, understood what you meant. I created the font object, placed a square of zero-depth next to it, and combined the two. This created the vector object that I was speaking of and his “your method” of converting a font object to a regular vector object.

What I was saying was that after doing that, the object that was created using your method has a slightly larger bounding box than one created using the Xploder app. I set the one from the Xploder app to zero depth and aligned the two so that the slight differences could be observed.

I am not saying either is correct or incorrect. Both work, but for whatever reason there are minute differences between the two. I just wanted to point that out.