I’m fairly new to my x-carve and this is the first time I needed to make a circle pocket and I’m a bit stumped on what I am seeing in the attached. This is supposed to be a 15mm deep circle that is 47mm in diameter. It was suggested that my z-axis is not perpendicular to my wasteboard, which may be something I need to fix, but if that was the case, why this spiraling happening only in the innermost paths of this circle and not near the edges?

FYI, this is on 4/4 cherry (though I saw this on plywood too) using the Inventables carbide tipped single flute straight 1/4". My cut settings are 762mm/min, plunge rate of 228.6mm/min and 3mm depth per pass.

A few items I was thinking, would these help? 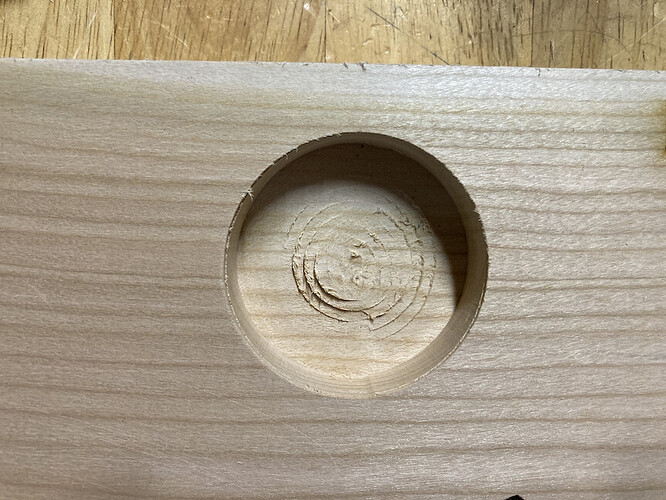 It appears something is loose,

How did you set your belt tensions?
Are your v-wheels snug when you turn them by hand?
If you grab your router does is wiggle at all?
The nut on the top of your Z is it snug? and the bearing snug in place it is secured to?

Thank you, I will check the various items you mentioned. I don’t recall how I set my belt tensions, however I just followed the build instructions that came with the unit.

As for the finishing pass, is the idea that this is a second job where I would enter a “depth per pass” that is right at the depth of my pocket so that it goes all the way down to the bottom of the pocket in one shot and does one pass and that’s it? For example, after I cut my pocket in 3mm passes down to the desired 15 mm, do I then set a 2nd job for a depth per pass of 15mm or is it slightly deeper like 15.5mm to clean it?

Correct that is how you do a finishing pass. For your belt tensions use a mechanical fish scale in the center of the belts. At 1" off the rail I believe it should read 4lbs.

A few items I was thinking, would these help?

1 - Keep 40%
2 - It would work but only for the bottom floor.
3 - You can dupicate the project and run a “roughing pass” with a bit false diameter leaving a smidge of material left. The followed by one full depth pass with true bit diameter, shaving of the remaining material.

I may have made a rookie mistake here that you all may already know…Because my job cuts all the way through the material in another area unrelated to this pocket, I have been putting a piece of 3/4" plywood down over my entire wasteboard because when I was cutting directly on the wasteboard, I could never seem to get the depth exactly right so that it cuts all the way through but doesn’t trash the face of the wasteboard. However, I suspect that even though I screwed down the large piece of plywood down on both sides and front and back, there are still a number of feet in the middle that are unsupported, so when I screwed my stock to this “fake” wasteboard, there probably was some vibration causing the spirals.

I’m assuming that’s it because after tweaking and testing a number of techniques, nothing worked, but the second I took off this fake wasteboard and carved directly to the board clamped to the actual wasteboard, I have virtually no spiraling.

I assume this is a known thing in these circles?