I bought a 1000mm fully-loaded kit from Robosavvy (UK based) in July, and finally found a place to keep it.
I hadn’t even opened it until today, I wish I had.

Firstly, the board has nothing printed on it. Pretty annoying, the grid would have been useful.

I’m currently on this page:
http://x-carve-instructions.inventables.com/1000mm/step2c/6adjustablevwheels/

I’d read on here about people missing a few pieces, but this is ridiculous.
I started subsituting early on (M5 x 30 for M5 x 35), I thought I could buy the bits I was missing at a later stage, rather than taking a few trips to the local bolt supplier.

When I got to the point where there was no spindle mount included, I gave up.
The kit cost me £1,400, and to have this much missing is more than an annoyance.

Has anyone had anything similar to this? I was thinking that a box may be missing, but the parts are all from different bits, so it’s unlikely. This is the first time it’s been opened.
Can anyone advise me what to do from here?

but I believe you’re looking at the wrong instructions. Here’s the link for the X-Carve 2015: http://x-carve-instructions.inventables.com/xcarve2015/

Thanks!
The paper which came with the X-carve had a link to the ones I was following. Is this wrong then?

Ah, that makes sense, though it’s pretty annoying. You’d think they could have made new links.
Your grid comment sounds probable. Pretty bad that it wasn’t mentioned anywhere though.

I bought the thing because of all of the comments about great service, I emailed Robosavvy 3 days ago and have so far had no reply. I wish I lived in the USA!

Where you bought it shouldn’t matter. It’s an Inventables kit. Get in touch with the US customer success team and get things moving for you.

The spinde mount has to be selected separately when buying at robosavvy, as I was checking my order I saw I was missing it as well.

Im in exactly the same position, i also bought then made space, im in the UK too and bought from the same place. On the order screen it says that the base board wont have any markings on it. Im also short a few things, but as you did i substituted what i thought was meant to fit then i happened to see the link under the main “which machine do you have” option on the build page and I’m now rebuilding for the 3rd time. only problem is i got past the cutting of the electrical wire so it looks like its a trip to the DIY store or a bit of splicing in a day or so. My fault for not reading every inch of the pages, but it could of been a tinsie winsie bit more logical in its layout ;o/ Just had a problem sorted where they sent the wrong size Z axis belt,contacted them and a replacement is said to be on its way. They couldn’t help fast enough so im sure you’ll be ok if you’re missing anything serious. i used the built in message system on the Inventables site, got a reply to my email client in under an hour.

You’re right, it would have just been more simple if they made a new link rather than changing the old.
In fairness, it was less than 3 months. It’s not exactly ages!

I bought the Fully loaded, it should have been included. It’s printed on the invoice!

PT1, thanks for this. Comforting to know I’m not the only one who missed it!
I’ll be taking apart everything tomorrow and starting again.

Going to be fun trying to work out what’s what!

Hi all! Just wanted to say thanks for your help.
Finally had the time to finish the build today. Ive got a few parts left over and I have a feeling I’m missing something.
Pics of the parts left and full build attached. 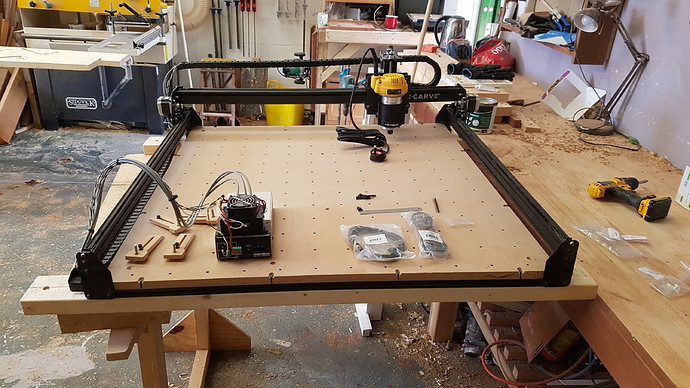 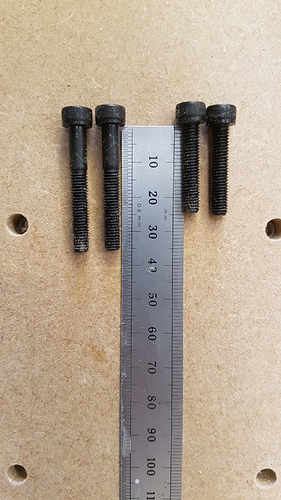 Oh no! you built it completely upside down…

just kidding! Looks great. I also had a few extra bolts… keep them handy but I am pretty sure you are good to go.

Tighten up the belts. Load up the software and get busy carvin’ ! 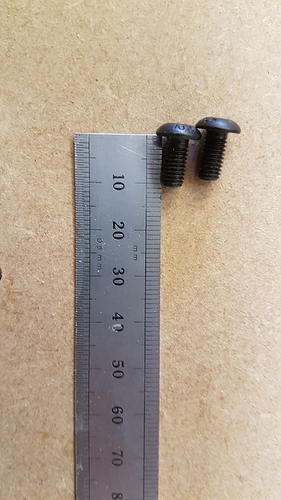 Thanks dude!
How come some people have 2 boxes?

The contol box and power box I assume. Electrical boxes anyway.
Sorry for my ignorance!

I believe those socket head screws are for the clamp sets. The clamps come with 4 of the 35mm and 4 of the 25mm. You’ll potentially need different sizes depending on workpiece thickness.

As for the 2 remaining button head screws, I think I may have had one or two extra. Just double check everything important.

That makes sense! Thanks guys, everyone has been really helpful.