Question then is if your Arduino have a known good GRBL install…?

Do you connect to it via Easel, UGS or other program?

I use Picsender to connect and it seems to connect okay, I used this link to install GRBL https://arduinoboardproject.com/en/how-to-install-grbl-on-arduino-uno-with-the-arduino-ide-software/
I am just about to connect the stepper wires to my old X controller after they come through the aviation plugs to rule out any error in the wiring /soldering there

The wiring/soldering of the aviation X axis plug was fine I did not check the rest yet, I changed the wiring from the aviation plug to the driver to what it was on the X controller and that worked, I was told to keep red and black as a pair and green and white as the other pair but that did not work in this case, it is now jogging on that axis, it was going in the wrong direction but I fixed that, it is travelling about 3 times the requested amount, so will need calibrating, and fine tuning in GRBL

Haldor, would you be willing to share your GRBL settings, I am having trouble with homing

Sure, I’ll get back to you this evening when I am at the CNC-machine. Could you post yours in the interim? 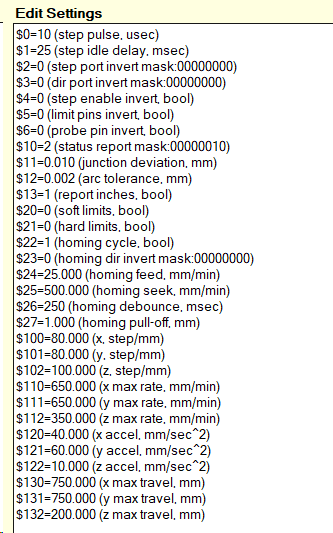 What are your troubles specifically?
Touching Z-switch only once?

Setup guide and explanation of homing setup in GRBL - https://github.com/gnea/grbl/wiki/Set-up-the-Homing-Cycle

No it does not touch Z limit switch at all, it moves down on Z 3-4 mm twice, 2 grunting moves and then moves the same in X and Y together as it normally does to get to home and then stops, I did take great care wiring and the only thing I had to do was link some ground wires together because there were not enough ground pins on the arduino, X Y Z all move as they should, I have been getting it close to calibrated and was going to do a final calibration when I get it homed, Picsender does some strange things if it is not homed first

These are my current settings, my homing switches are connected as normally closed (NC) hense $5=1:

I have been getting it close to calibrated and was going to do a final calibration when I get it homed,

Get each axis calibrated first

Where exactly are the homing switches installed?

The homing switches are installed at the end of each axis and have been tested with a multimeter all are working fine, but the Z-axis does not get to the switch it only travels down a few mm then I get the message homing is complete, all axis have been calibrated to within a few mm, as I said Picsender does some strange things before being homing so I wanted to do the final calibration afterwards, I am trying to download UGCS to see if that behaves any differently but not having much luck there either

Do your controller connect to Easel at all?
If the controller detect switched trigger, but is never near the actual switch then you have a wiring flaw/misconfiguring issue.

Do the controller issue an “idle / ready” status or prompt an alarm after you attempt homing?

If your switches are wired as Normally Open (NO) and $5=0 then its possible your controller read false triggers. Re-wire to Normally Closed (NC) and set $5=1 and retry.

ok
I also sent the same ? on Arduino IDE and got the same result back except it had the word Alarm in front

Haldor, I have wired the switches to NC and set $5=1 and it is a lot better, it moves about 2 inches up in Z and then moves about the same in X and Y, it stops as if it has triggered the switch, so you are on the right track, I would never have thought of that

Good to hear there is progress, I know how annoying troubleshooting is as I have experienced many of the common issues myself

If all three axes move during a homing sequence ($H) then atleast we know the Z is detected since this one need to clear before X/Y start their run. Do the machine state an alarm after completing the sequence or is it available?

I am travelling the next few days so wont have much time available to follow-up untill Sunday/Monday.

No, the machine does not state an alarm, I will have another go Tomorrow as it must be a seek rate or travel rate or something I can alter to let it seek further, have a nice few days travelling

Might try increasing $26 just to rule out switch noise?

Thank’s Haldor , I will try them all

I have rewired the homing switches using shielded cable, and also put Tinned Copper Sheath, Braided Cable Sleeving on the power cord in the drag chain, also earthed everything, machine, shielded cable and tinned copper sheat to ground, that seems to have cured the problems I had with noise, I still have to use it to carve something but at least it’s homing now,
the only problem I have now is getting the probe to work, it is showing open all the time, I have tried $6=1 and $6=0 and $10=115 $10=2 nothing seems to work, I checked the wiring with a multimeter