I’ve seen some pretty lengthy posts on here about how to preform the mod in several different ways. What I haven’t seen is what the mod would help with. Any insight?

X-axis flex. A small amount of flex there means more movement at the tip of the tool.

In a nut shell. The X axis having 2 20X40 rails for unsupported trusses have a tendency to flex and twist from the weight of the carriage and the spindle. This is even worse if you put a heavier spindle on the machine.
I figured that if you put a plate of metal between the 2 rails and locked them together with bolts that this made it into one much stronger truss that removed a lot of that flex and twist.

Others have used washers and shims between the rails and gotten good results.

The other big mod that folks did was change out the stock motor and ER11 collet adapter for trim routers that have better bearings, better collets, more power and in general just work better than the stock motor.

There are others that are working on new Z axis mod that increase the Z travel.
I also designed a taller and wider Y axis end plates. They are 50mm taller and 20mm wider.

Another mod that we see is folks putting mid span supports on there Y axis rails. This helps with the added weight of the X axis.

The gantry as it is has enough flex to twist a bit, especially when under a heavy load like a with the Dewalt router.
One symptom of this twisting is odd “fingerprint” cut lines where the tip of the cutting bit may be just a tiny bit off (both in the y and z) due to the flex.

Here is a pic that kind of shows this. (It is very hard to see in this sorry),
There are groves and ridges about 1/16 to 1/32 in height (I traced around them in red) 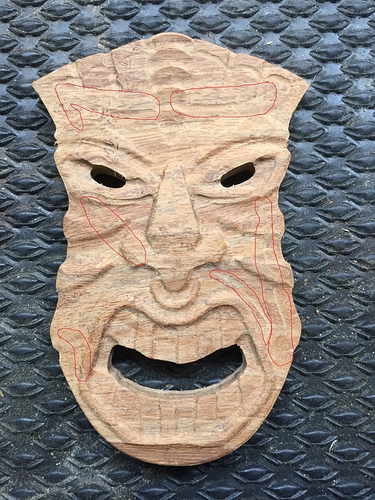 Fingerprint cutlines.jpg2448×3264 2.54 MB
This was confusing me as they were not in the cut file, but happened consistently on each one I cut.
Eventual I figured out it was the router “wiggling” as the gantry twisted. Dragged out or pushed back as it moved.
As a test I slit a metal bar between the gantry rails (Held in place by friction) and it went away.
I did the stiffing mod the next day

Placing a spacer between the 2 rails dramatically stiffens the whole gantry virtually eliminating the twisting.
There is a bit of debate as to just how much needs to be done to accomplish this.
Is just a spacer enough?
Are the bolts necessary?
And how much does the material used as the spacer add to the rigidly?

I decided to go with the steel bar and bolts which may be overkill but works fine.
Though I did go with a narrow bar that was used in the original mod. (They used what they had on hand)
I got a bar that was the next side down in width. Which is just a hair narrower that the V rail, still works perfect as a spacer (same thickness) but weighs a lot less.

But not mater what approach you decide to use it is going to superior to no mod at all.

Someone recently also put up a post where they just put bolts between the maker slide like every 4 - 6". They commented that it also helped a ton.

I think that’s the route I’m going to try

Yeah I think me too. I just bought some bolts for it the other day. The only problem for me is that my Shapeoko 2 has some weird X carriage spacers that give me very little clearance. We’ll see if I can get it to work, though.

I have done a stiffening mod with just bolts. Pictures below.

All I did was loosen the four bolts holding one of the gantry beams to the end plate and moved it as far to one side as possible, dropped 6xM5 bolts (50mm Long) with washers through the gap and then snugged the gantry rails together and tightened the end plate bolts back up.

Once I did that I then put washers and wingnuts on the bottom to just over finger tight to get the gantry beams locked together nice and snug. I immediately noticed the difference in the quality of my cuts, I used to have obvious steps in deep cuts and now they are gone. It is also quieter when cutting.

I have a machine based on the X-Carve design with a 400W quiet cut spindle. 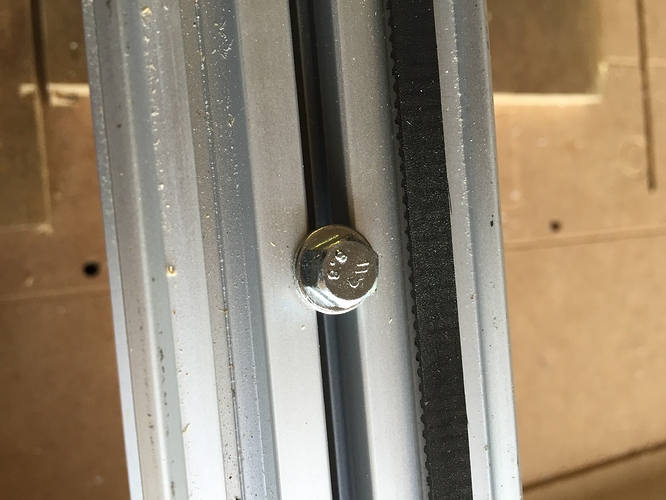 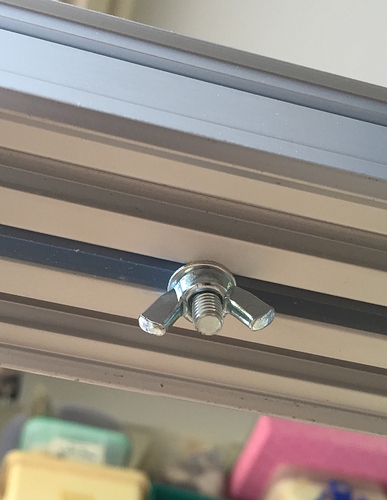