It seems like this has been brought up as an issue in a handful of threads recently. Is there any relative benefit to this change functionally?

I just recently found that this behavior was the cause of the perpetual fray line at the tab height when using an up cut spiral and a ledge when using a straight. It’s consistent and annoying! I would love to have a fix.

I had that issue when cutting some plywood parts. Had to hand sand every piece.

I just sanded 26 letters that have this fray all along the tab line (I’m not talking about the top fray.) Very very annoying. Nearly doubled the finish time. The cut was perfect except for this line.

@Zach_Kaplan is this reversed cut absolutely needed or can it please be gotten rid of? I cut tons of letters like these and have been cleaning the fuss without really considering it for months, but now that I know what’s causing it (and the fact that it seems superfluous) it would be great if it didn’t happen. 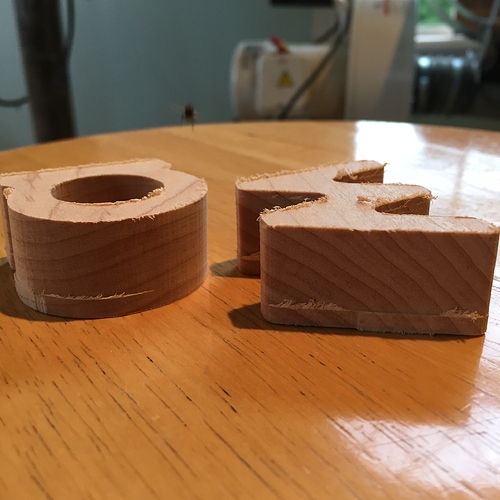 (Do you guys see the photobomber?)

yes, that is exactly what I am experiencing.

I had something very similar happen a couple of weeks ago and at the time I thought something was outta-wack, but now I think this is what I was seeing.

lol, I did too. I thought my bit was dull but same thing after I changed it out.

Fixes for both the reversing of direction and raising to the safety height are in the works. I can’t provide an exact date just yet for release, though. The best I can say is “soon.”

Raising to the safety height to go over tabs instead of just to the tab height.

That’s great you guys are working on a fix. Thanks a bunch.

But what do you mean about the safety height above the tabs? Are you saying it will only travel high enough to move beyond the tab and then go back to the cut rather the traveling all the way above the material? Because that would be awesome!

@JeffTalbot any word if when this will be fixed? I just broke my first bit because of the reversing direction

We are getting closer, but I still can’t give a date. There are a number of moving pieces and dependencies involved in this change.

Great news. I have had some issues lately.

I just ran into this issue as well. I’m not getting a fraying, but the time it takes to raise to safety height is adding way too much to the time per part.

Thank you for working to fix this!

I have the same problems with broken bits.

I only cut aluminum and have wasted more parts and broken more bits because of this issue than I care to say. Please let us know as soon as this is available. Aluminum is far more susceptible to reversing direction as the metal really grabs the bit and just destroys it and the part. I am at a complete standstill on intricate parts.

Is there an update on progress on this feature? Even if it is only stopping the reverse function, dont care so much about the up down distance right now just need to get operational. I need to cut several hundred parts in aluminum and cannot do so until this reverse function is stopped. Anyone from Xcarve that can weigh in on this?

If you are asking me, yes [quote=“JeffTalbot, post:16, topic:25731, full:true”]
We are getting closer, but I still can’t give a date. There are a number of moving pieces and dependencies involved in this change.
[/quote]

So is there an update?

Thats what thought thanks Phil