A copy of the file for reference:

It’s an SVG with 3 objects that came in from Inkscape. I scaled down to 5.5" so that I could fit it on a test poplar board.

It’s a catan board, with a sunken pocket for laying the pieces in (with some knobs raised up to hold the pieces in place). My plywood catan pieces have holes in the center. 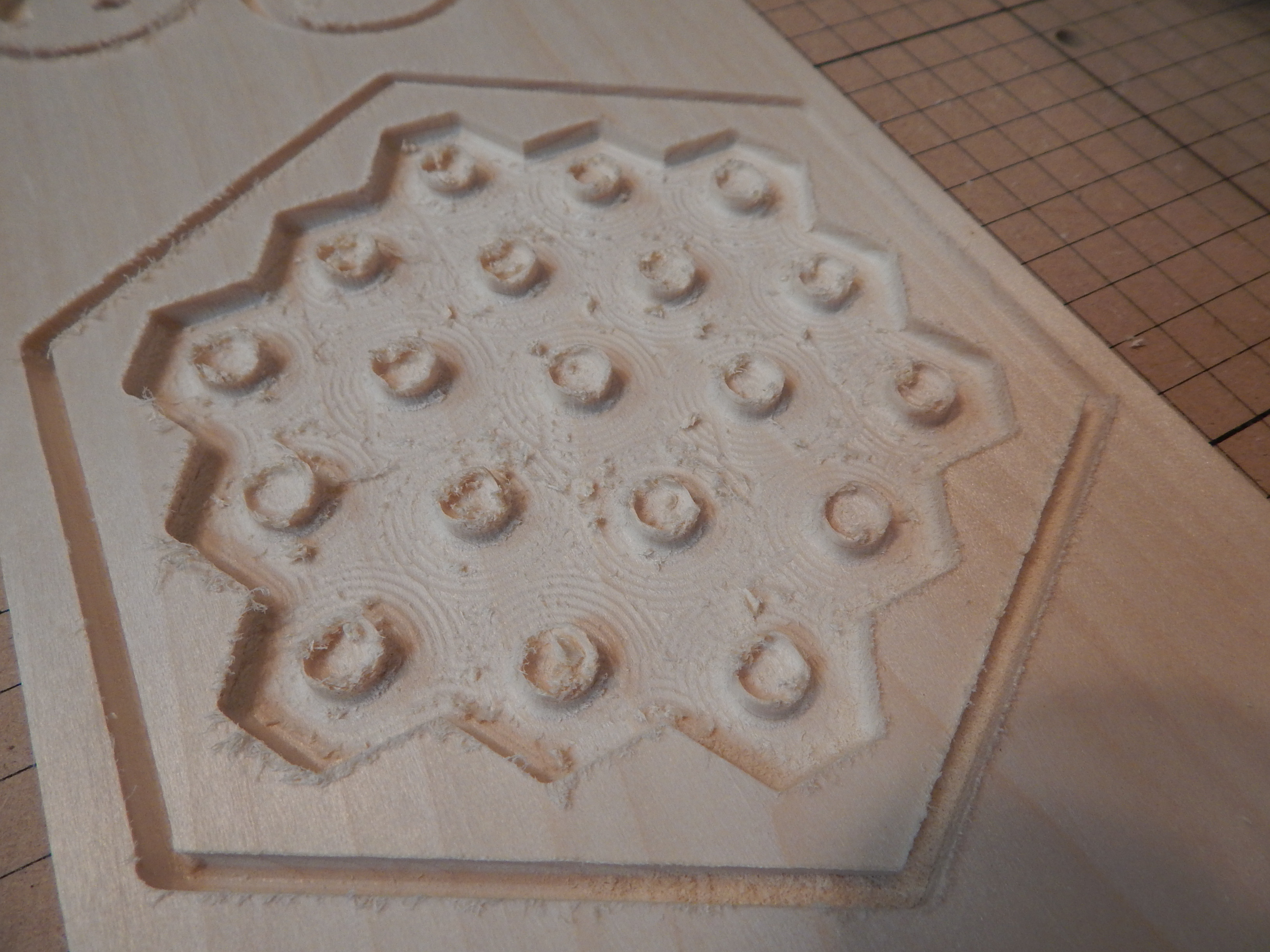 Those knobs are supposed to be flat topped circles, at roughly half the depth of the pocket. Instead of leaving some material and cutting around it for the pocket, it cut the circles and kept leaving a 'ring" around them that’s basically the full height of the material.

Is this just because I scaled it down? I didn’t see any major red spots on my 3d preview.

Cut with a 1/8 bit (the “middle” one from the starter pack that came with my kit, I don’t know what it’s specifically caled).

Also, any recommendations on better bits that wouldn’t leave so many burrs all over the cut on poplar?

Looking at the circular platforms in Easel, it looks like there’s a gap between them and the…uhhh…hex cluster?

object. If you change the circles’ cut type to Outline, Inside and zoom in just a hair you can see how they don’t quite match up with the “holes” in the hex area. I can see the discrepancy in the tool path as well when zoomed in some.

I’d try deleting the circles in Inkscape, and just filling the holes in the hex area with a shade of gray. I think Easel will pick that up as a separate object and allow you to set the depth independently. I think. Maybe. Or not. I don’t really know for sure.

Deleting the circular, I do now see that the grey hex pocket already HAS holes in them, and it appears that the manufactured holes to hold the tiles in are just ever so slightly smaller…thus that gap.

I can’t zoom the 3d window due to a PC issue. I have requested zoom buttons for the 3d preview to match the zoom buttons on the workspace, hopefully those will get on the list!

Maybe I’ll do another run without the grey circles.

Maybe I’ll do another run without the grey circles.

It should cut just fine that way, if you don’t mind your circles being the full height of the board. I can’t see any other flaws in the file that would cause any issues.

Also, as far as your furry edges go - try increasing your feed rate a little bit, maybe 40 IPM or so. Might want to make a couple of quick test squares or something just to check it out, but I’ve noticed on the poplar craft boards I have, they tend to stay a little fuzzy like that if I’m moving too slowly through them. CNC is a tough beast sometimes, very fine line between success and tears while we learn stuff.

Yeah, this is all “test run” stuff to see how different bits, speeds, and depth of pass work out on various materials while I keep tuning things and adjusting my expectations on how it all works. I don’t mind it being off yet, since this is just a fun test cut while I wait for more bits and stuff to arrive.

I’m 100% new to CNC and stuff, so I’ll have extra lag time making useless cuts in various materials until I see for myself what each type of bit does.

If you remove the circles from the hex-pocket shape before you save & import the SVG file, that should do the trick.