Dear X Carve Hive, I’ve well in to the middle of the X Carve set up and calibration phase after the initial first few carves. A couple of things went haywire, I got depressed, I tinkered, things got better, then other things needed calibrating, but all in all, I’ve become friends with the X Carve and need some advice…

I suddenly started getting crazy straight lines at angles to my paths… In the middle of no particular shape, the x carve would just shoot off in a bizarre direction. It’s not at the end of a shape cut, so that the Z was not pulling up high enough, it’s not only on certain types of shapes… circles, square all do it… I’ve listed some of the things I’ve already tried below:

Here’s a picture of the path of destruction… (btw the shape is not supposed to be a perfect circle!) 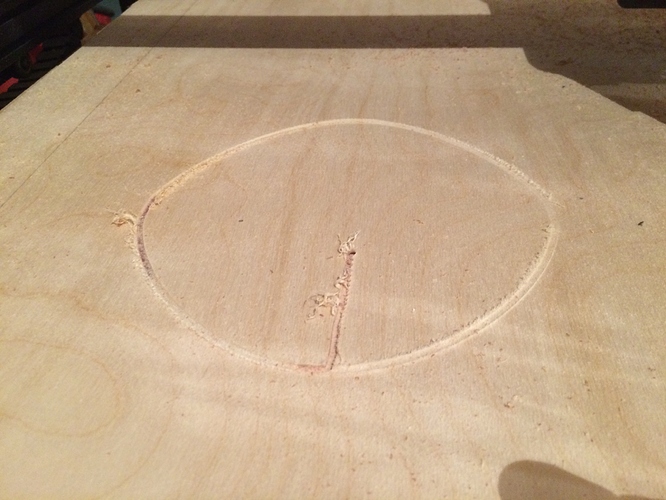 Was the priest properly ordained by the Church of CNC?

if so the ghost issue should be covered.

I had a depth of cut issue that was driving me bonkers on 3d carves where it was losing steps progressivly while running and kept going deeper. it turns out the nut at the top of my z lead screw was loosened up and when things warmed up a bit from the rapid action of the z axis it would start to slip on the lift actions and thus go deeper when decending.

Once I had that figured out things went much better.

Dumb question, are all your motors running correctly? Is it possible that you have a poor connection on one of your steppers? That particular carve looks very much like it could have been the X-axis stepper stopping motion before it should, about halfway around the circle, then the Y moved up just like it was supposed to…

I agree with dan, get a multimeter, and check all the wire connections. If you have splices, you should solder them, and cover them with heat shrink tubing. Make sure the wires in the terminal blocks aren’t loose, or accidently touching neighboring terminals.

Thanks all… checking all of these things… I will let you know what works or doesn’t.

I’ll defer to those with more knowledge, but this looks similar to some of the problems I had. Turned out I had a couple of issues.

Set screws on my pulleys were slipping. I had lots of issues tightening the small grub screws and eventually replaced them with machine screws. Next time I need to play with these, I’m going to file a small flat on the stepper motor shaft, which should eliminate any slippage entirely (wish I’d done this when I had it all apart).

The other problems were with the pots for adjusting the current (or voltage, I’m not a sparky) needed some adjustment. There are several posts on this subject, so if the pulley screws are not the problem, perhaps it’d be worth looking at these next.

I’m guessing it takes that path right where is plunges down, right?

Hey Jeff, It was just cruising along on the curve when it suddenly took the sharp left and went bonkers. Wasn’t at the point in depth where it was cutting tabs or anything. Has me puzzled.

Slow the plunge speed to 6 or less. and try a little less depth for each pass.That’s what I did to fix that when I had one of those.

I had this exact same problem during the early days of learning my x-carve. Some models would come out perfectly, yet on others the x-carve would just go randomly nutty and start carving the hell out of my stock. There was never any rhyme or reason to it. What it came down to with me was wiring connections. One of my stepper motor wires wasn’t screwed tightly enough in to the controller. When the carriage pulled a certain direction, it would momentarily break the connection with that stepper and then everything would quickly go to hell. All it took was one half second cutout of that stepper. Even if it reestablished the connection a moment later, all hope was lost for salvaging the model. As a couple others have said, double and triple check all your wiring connections.