I done a spiderman sign for a woman in work for her grandchild as a gift and her daughters likeed it. They asked the woman from my job to ask me to make another 2 for there kids and said they would pay me for them. One wanted batman, the other wanted the hulk. I have the batman one done and just have to finish a few bits on the hulk.
I’m happy the way they turned out. The 6mm straight bit I used on the batman sign left a super smooth finish 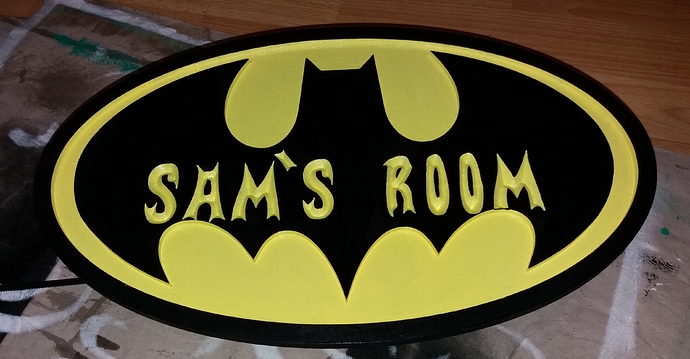 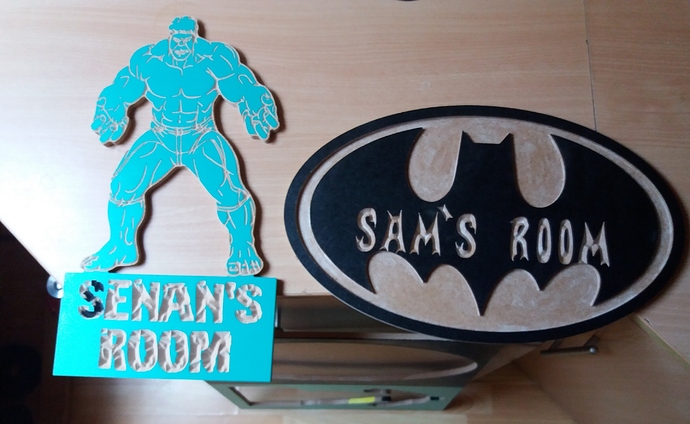 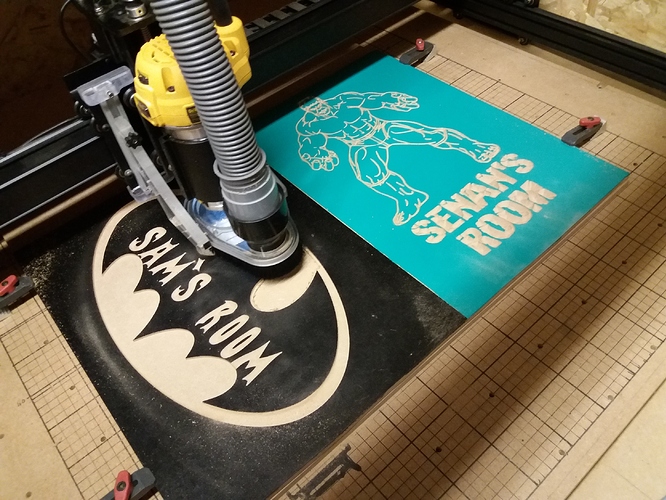 I think you should have figured that out with her before you did the work… up to her, I bet she hands you a 20 and says thanks

the signs look great though

all depends on your area, In my area I undercharge a bit, I’ve become the go to person now for signs and decor. for the hulk cutout sign I would ask 60.00 and it would sell immediately and the sam’s room I’d get 40.00. they would take an hour max to paint and maybe two max to carve and clean up. MDF that size would cost me approx 2 bucks in materials each,

Cheers man. Yeah the last one I gave as a gift and she got me a thank you card and €8 worth of scratch cards lol. I just feel guilty saying a price and worried they think its not worth it.

Man I wish I could get €100 for the 2 of them . As far as I can tell , there is nobody around my area doing personal signs. I get all my mdf for very little or nothing as they are off cuts from my job. Im just afraid she doesn’t realise the work that goes into them

If they don’t realize, then they don’t. I’ve made several of a certain sign and had a handful of people ask for them and how much I charge. When I tell them the price some back out. Doesn’t bother me, but my time means something to me, maybe not other people. Made one large 4’x2’ sign out of 150 year old american chestnut barn wood. Stuff was as hard as AR steel it seemed while cutting, especially after burning through a couple of saw blades. Told someone the price for how they wanted one and was told I was crazy. Then magically a month later they changed their mind after trying to make something similar themselves.

if she doesn’t, someone will. I went through the same thought process, then a customer reminded me of something. “can I buy this in a store somewhere with my kids name on it?”

I charged way too little in the beginning, I made sure that my work was immaculate though, on average ppl would flip me an extra 20 when they came to get it and see how nice it looked. so that extra 20 became my idea on how much I could charge for each item.

I use facebook to sell my products alot, so I gave friends huge discounts, in trade for them spamming every facebook with a pic of the project and my page info on every group they belonged to.

Wow. 150 years old? Bet that you cost a pretty penny alone. I see where you’re going about your time. Its fun making them but when you have a tonne of other things to make and a full time job it gets a bit stressful

Thats exactly why the 2 girls wanted them. They couldn’t find anything with the kids names in any shops. One of the girls showed people at the creche and got me a bit mor work so I’ll look after her with a good price

The market dictates what the signs are worth. But the difficult part is trying to charge after its made and then assigning a price. I’d just give a low number and suck it up. Hopefully she’ll give you good feedback and references/referals. You can’t charge what we think is a fair price after the fact. Some are ok with it, but others are not. Most don’t know the amount of work or cost of materials/tooling that goes into these kinds of things.

@TomP & @AngusMcleod
Yeah thats what I’ll do. I’ll just charge for the paint ,let her know I’ts just for the paint and get them to spread the word but the price for others would be higher

I would just tell her (with whatever amount she gives you) what the real price is that they would go for and WHEN she tells people about them to use that price. Then you can look at it as Advertising costs… She helps you sell one or two additional signs at the REAL cost. You are then doing great… it also allows you to give a “discount” to the new people because she referred them to you.

I look at it all as a teaching learning curve when I am making new stuff for people that I have not tackled before but want to be able to make more of down the road… I am working on a hidden storage flag for a customer now… It is something I have wanted to make but didn’t have an order for one… so I gave him a smoking deal just so I can get the kinks out on his and all my parts for the first couple of them are all paid for (and figure out how much time I will actually have in the project for the future ones). He is a big 2nd amendment fellow and I know I will sell a few more from his.

Nope, all free. I’ve got more American chestnut and oak anywhere from 80-150 years old than I could cut for in a couple years. Every piece of it free, other than making a couple of quick projects out of some of it for the guy that gave it to me. He told me if I run out somehow to let him know and he’ll get me more.

Ye , thats the way I see it too. And I have the files all ready to go if I want to make anymore.

Free ? You jammy git. I haven’t played with any nice woods yet. There is nowhere local only a woodwork hobby place and its very expensive:(

I forgot to post the finished finished signs. I have yet to deliver them. Hope she likes them. 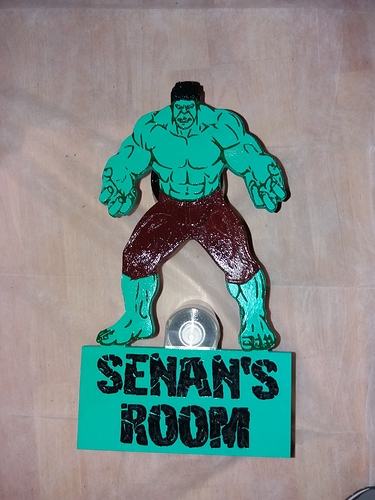 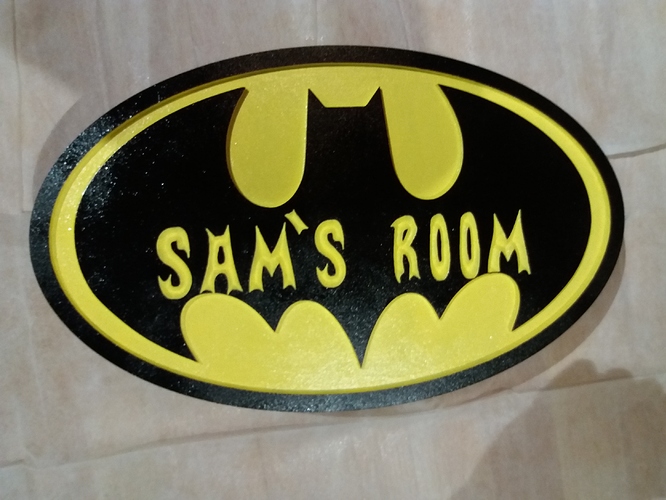 The polyurethane was still wet on the hulk

I made the mistake of giving good deals on a couple signs for a customer then when she wanted a completely custom piece price was not discussed and it took a lot of time and work a good 3 hours of just design time and then hours carving and even more painting with a deadline of only a week to get it done for a wedding. I still low balled it and she was upset it was double the cost of the other signs which were only a couple lines of text. I told her it was my fault for not giving a price up front and lowered it then she still ended up giving me the amount I asked for originally. Got to keep the customer happy or they wont be back and wont send more work your way is how I see it.

The guy told me he’d have a trailer load for me whenever I’m ready for it lol. I’m lucky too that I have a good mill a little over an hour from me that I just found out about. Every kind of domestic and exotic hardwood you could think off, and all furniture grade.

You’re right there. Lessons learned tho. The customer is always right lol

Fair play to the guy. Its nice when you find things like that when out and about. I keep saying I’ll go visit my local joineries andask if I can get a few pieces they throw out but Inever have the time