I downloaded a Corel file from Instructables and saved it as an SVG with Inkscape so I could import it into Easel. Not being the original creator of the files, not sure how/why any of the 4 pieces would be different.

When I imported into Easel, 3 of the 4 “side walls” of this tea light holder template gave me the red unable to cut marks, but one did not. They look the same size in the previews, so I don’t know if some lines are different sized or what.

So I took the 1 piece (upper left - ignore the square on the lower left - that’s the “base”) and copy/pasted it and removed the other original pieces since they’re technically 4 of the same piece. The second piece (to the immediate right of the original) copied with no red marks.

Copied 2 more times and move down to the lower row, and those are now showing red cut issues. Wondering how 1 piece with no issues pasted over and over are unable to cut. I’ve moved them away from other pieces to ensure there’s plenty of room to cut.

Being new to this, I’m a clueless newbie who doesn’t understand. Any ideas of suggestions would be much appreciated.

A link to the file:

Updated: I mistyped about the “ignored” square. It is the one on the left that is obviously not like the others.

I think the issue you’re describing might be just an artifact of the 3D rendering. If you click “Show Toolpaths” do you see paths generated for all four pieces? If so, it should cut the pieces okay.

I looked at your drawing and don’t see any red areas to indicate they wouldn’t cut. What I do see is pieces that won’t go together. Two sides have to be different from the other two for them to fit.

@BillArnold - I guess that’s what happens when I copy the same piece for all 4 sides instead of 2 different pieces that would attach to each other. 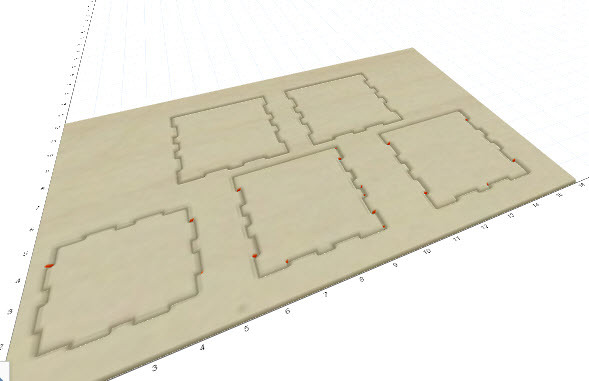 @rodovich - here’s a copy of my “show toolpaths” - I presume it looks like it is ok?

@AlanDyke, yes, that looks OK, at least as far as cutting all the pieces—but there’s still the problem @BillArnold identified of having pieces that won’t fit together!

There’s one exception to the “everything looks like it will cut”: If you look closely, you can see some spots where Easel will leave small support tabs instead of cutting all the way through. The easiest one to see is in the front of the square-ish piece, between the 2" and 3" markers on the axis. The tabs keep the pieces from coming free & getting damaged during cutting, and you can break them with a chisel or screwdriver once the job finishes. Alternatively, you could disable tabs (in Easel’s Cut panel) and use double-sided tape to keep the pieces held down during the job.

@Rodovich - Yeah, I’ll put in the 2nd piece back into the design now that I know that those tiny red notes just seem to be some strangeness either in my browser or something.

The real “question” that I was bringing up was more that the one piece looked fine (no red) but copy and paste made the 3rd and 4th pieces with potential cut errors. I figured if it could cut one of the same designs, it should cut all 4 without issue.

I’m still 3+ weeks away from shipping, so for now I’m just playing with how to bring things into Easel and move them around and look good. So by the time I’m ready to cut, the right pieces to fit should get put into the file for cutting.

Thanks for your help guys.

Another question if you don’t mind…what happens if a tiny section is red like my image? Does the machine cut everything around it? Or would (should) it skip the entire connected object?

I got to playing around with your drawing while taking a break from mowing my lawn. (Doesn’t take much to distract me from that!)

For a check, I opened your drawing using Chrome after initially looking at it in Firefox. While in Chrome, I looked at how the paths were set up. All pieces were set for an “On Path” cut. Whether I changed to an Outside or Inside cut, I got red lines just as with the “On Path” setting. Going back to Firefox, I don’t get red lines with any of the three cut paths. Which browser are you using?

Incidentally, unless there’s some unusual circumstance, these types of pieces are done with an “Outside” path cut so the full dimension of the piece is left.

Yeah, I’ve been using Chrome too. I didn’t think to try viewing it in a different browser.

Aside from having pieces too close together - would being “outside cut” make any real difference to the ability to make cuts and turn something red (or remove the red) based on changing inside/outside/on path?

For this, it was more a test of why copies of a piece that showed no red marks had the red. Presuming it could cut one piece without issue, it just didn’t make sense why an exact replica might not be able to cut…particularly if the pieces were spread out enough that the size of the mill was small enough to reach between 2 pieces.

While we’re at it, does anyone have a better template file for theses things? (Tea light candle holders)

[quote=“AlanDyke, post:9, topic:1431, full:true”]… Aside from having pieces too close together - would being “outside cut” make any real difference to the ability to make cuts and turn something red (or remove the red) based on changing inside/outside/on path?

For this, it was more a test of why copies of a piece that showed no red marks had the red. Presuming it could cut one piece without issue, it just didn’t make sense why an exact replica might not be able to cut…particularly if the pieces were spread out enough that the size of the mill was small enough to reach between 2 pieces. …[/quote]

I’m far from being an expert on CNC setup, but I’ve been practicing a lot on different things. I’ve gotten good cuts with a 1/8" bit with the pieces spaced 1/8" apart, but I usually set them double the bit diameter.

The red I was seeing varied depending on where on the screen the piece was located; I guess that was due to whatever Chrome is doing with the graphic.

As to outside, inside or on path cut, it depends on what you’re cutting. For instance, if you want to cut a 4" square block of something, you need an outside cut to maintain a 4" dimension. On the other hand, if you want a 2" hole in a piece, you would need to lay it out with an inside cut. In either case, your final dimension would be off by 1/16" if you used an “on path” cut.

I’m having a bit of trouble running Easel. I can’t seem to get a full view of the page in easel that asks for material thickness. I know there is a OK button lower, but the screen won’t roll up to reveal it. My computer is a PC running Win7 pro 64 bit and the monitor is a Asus VT207 touch screen. Thanks!

What browser are you using? Can you send a screenshot?