I’m swapping from the Nema 17 steppers to Nema 23 with Gt2.5 belts and pulleys. The issue i have is the new Nema 23 have come with a difference wiring colour code.

Now i’ve done a search online and found a few difference colour codes to cross over to the X-carve colours Red, white/blue, Black & green. I wired it as per one instruction and the x axis moved backwards… and the Y wouldn’t budge. So with a bit of swapping around i got the X to move correctly but using the same wiring code the Y axis wasn’t happy at all.

Does anyone have a good cross reference colour code?

I did, but after it didn’t work that was my first thought so i unplugged one side and tried again and the motor still makes a grumbling noise and doesn’t move. so i think I’ve got some wires the wrong way round.

What I don’t know is which colour is which on the new colour code. For now at least my aim is to get one side of the Y axis working correct and then connect up the other side once i know that the wiring is right.

You can also connect one pair (out the 4 wires) together and spin the shaft by hand, you will feel it cogging if you have found a matching pair. The stepper motor have two coils and if you short the input/output lead of a coil you will insert a magnetic force holding the motor back. A Nema23 with both coils shorted will be very hard to flip by hand.

(all this assumes motor not connected to anything)

I’ll give that a try tonight.

Lin Engineering is a U.S. manufacturer of hybrid step motors.

Thanks for the help, i followed the LED test and found the pairs. From there i looked back at the original wiring and got the X and 1 side of the Y working. Once i was happy with them i connected the second Y motor and reversed two of the wires.
I’m now making a new box for the power supply and the G-shield. Once that is done it just a case of resetting the number of steps per mm for the Nema23 and the GT2.5 belts. Does anyone have a base line number i could use?

Most likely the Nema23’s have the same step ratio as the 17’s, 200step / revolution, 1.8deg/step.
If so no need to readjust any step values. You might need to readjust the stepper current limits in order to utilize the added torque the 23’s provide.

I’ve changed belt type at the same time, so I’ve got the GT2.5 now to replace the original GT2. These have a bigger tooth to help transfer the torque.

I’m having an issue with the 3GT belts.

I’ve been doing a hell of a lot of carving over the last week. The machine has been running for at least 7 hours for three days on the trot which is the most i’ve ever ran the Xcarve in a short time.

The belts on the X and one side of the Y axis have gone like this: 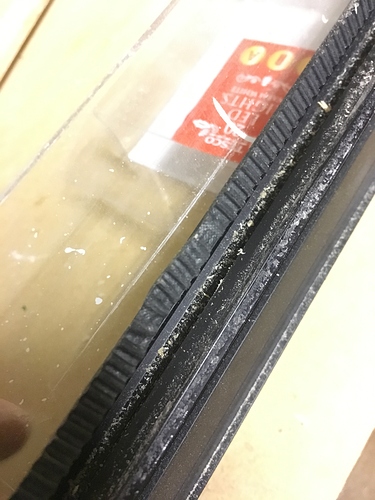 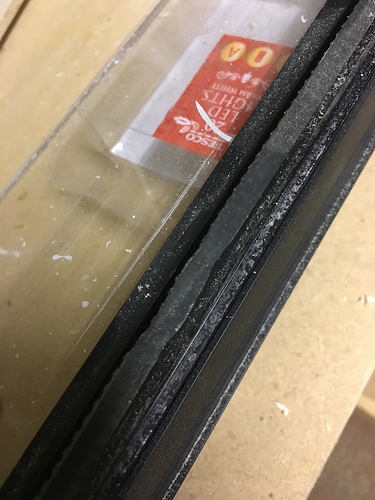 Now, is this me being stupid and over tensioning the belts or is this down to rubbish belt quality?

(I’ve not cleaned the rails down since the last carve, excuse the dirt)

I had a belt look like that, it was caused when a pulley slipped and the belt was dragged under the edge of the smooth idler. The belt was crushed and the teeth were all a mess. I replaced and re-tightened everything…your belt looks similar.